Today’s ‘Who Asked You?’ award goes to former Cuban prime minister Fidel Castro, who wins hands-down for his oddly selective summary of the Netherlands victory over Brazil (see below).

For example, where many saw Felipe Melo petulantly stamping all over Arjen Robben‘s upper thigh, it seems El Comandante saw capitalist pigs once again whitewashing the oppressed and vulnerable of South America.

Maradona about to quit? 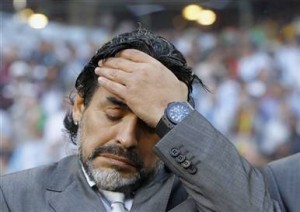 According to reports circulating in the press, Argentina coach Diego Maradona has made up his mind to quit his post after seeing his side dumped out of the World Cup by Germany on Saturday afternoon.

“It is done, my cycle has ended. I have given everything, now I will spend time with my family – but I am not depressed.”

The report in Cronica goes on to suggest that, as yet, no decision has been made over El Diego‘s future, and that Argentine Football Association president Julio Grandona is planning to open talks with him in the next few days.

Maradona’s assistant Alejandro Mancuso insisted that his backroom staff are hopeful he will be staying put;

“Knowing Diego, it is difficult for me to think he wants to step down after failing in his objective to win the Cup. We can’t throw away all the good work we’ve done.”

Despite the Albiceleste‘s thrashing at the hands of the Germans, Maradona and his squad received a rapturous welcome when they returned home to Buenos Aires yesterday – with fans cheering the style of football that the side employed in South Africa. 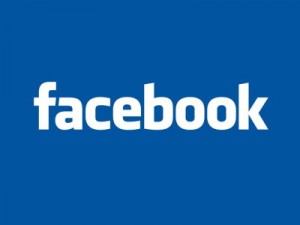 Social networking website Facebook are in talks with the Football Association over becoming the new sponsor of the England football team.

The website, launched by Mark Zuckerberg in 2004, is one of four blue chip companies vying for the potentially lucrative contract, with the FA said to be holding out for double the £20 million they received from former sponsor Nationwide – despite England’s poor showing at the World Cup.

The FA are also reportedly discussing the endorsement with telecoms giants O2 and Orange, as well as Spanish bank Santander, who were linked with the FA Cup before E.On signed on for another year.

I wonder if England coach Fabio Capello, who infamously banned his squad from using any networking sites during the World Cup, ‘likes this’?

Tabarez: ‘The pressure is on the Dutch’… 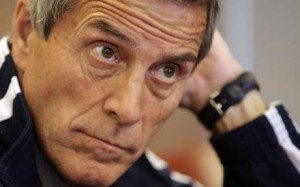 Uruguay coach Oscar Tabarez has insisted that all the pressure will be on his side’s opponents coming into the World Cup semi-final clash today as the Netherlands will be bidding to reach their first final since 1978, despite being widely regarded as one of the world’s footballing super-powers.

“The Dutch side will feel the burden of expectation far more than us. No-one really believes in us and the possibility we might win.

We have to enjoy the World Cup and the match, make the most of it, because we know millions will be watching these players. This is a challenge, but also a reason for great happiness.”

In a moment of madness, the Celesti chief also ludicrously claimed that Dutch winger Arjen Robben is ‘not a diver’;

Like any footballer who is hit on the pitch, well, I wouldn’t say he is a cheat. These are things that happen in football. It’s up to the referee to determine the players’ intentions.”

Hmm. The evidence would seem to suggest otherwise. 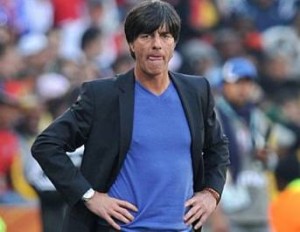 Germany coach Joachim Loew has revealed that he has been forced to keep wearing his familiar blue sweater, as his squad seem to think that the understated garment has taken on mythical powers;

“The thing with the sweater is that I am not driven by superstition.

The other coaching staff said I should be wearing the sweater now because every time I wear it we score four goals.”

Loew sported the fabled sweater during his side’s second-round and quarter-final four-goal demolitions of England and Argentina respectively, and he is hoping that the luck will continue into the semi-finals.

“I am not even allowed to wash it now and I think I will wear it again [against Spain].”

It would appear that midfielder Bastian Schweinsteiger is also willing to put his faith in Loew’s wardrobe;

“I do not know how many sweaters he has that are blue, but I hope he has one or two left in his suitcase.”

The vest is yet to come.

Looks like German LEGO buff Fabian Moritz has been up to his old tricks again.

I love these, perhaps a little too much…

“The vast majority of football fans do not even know what continent Uruguay is in but it seems to me that the referees are biased against the South American sides.

It happened when Brazil lost to Holland, when all the decision went against them and they were sent down to 10 men at a crucial time, which should never have been done.

But a final now, between two European countries, will be as colourless and unhistorical as any since the sport was born in the world.”

Former Cuban revolutionary Fidel Castro has his five-penneth on World Cup affairs, and slightly rewrites history in the process.

Mauricio Espinosa, the Uruguayan linesman that disallowed Frank Lampard‘s goal against Germany, has admitted that he made a mistake after being caught out by the speed of the shot. (Guardian)

Manchester United manager Sir Alex Ferguson thinks that Wayne Rooney‘s poor form at the World Cup was a direct result of the crushing expectation put on him by all and sundry. (F365)

A replica World Cup trophy made entirely out of 11 kilograms of cocaine has been seized by police in Colombia. (BBC)

Today’s (Tuesday 6th July) round is as follows: