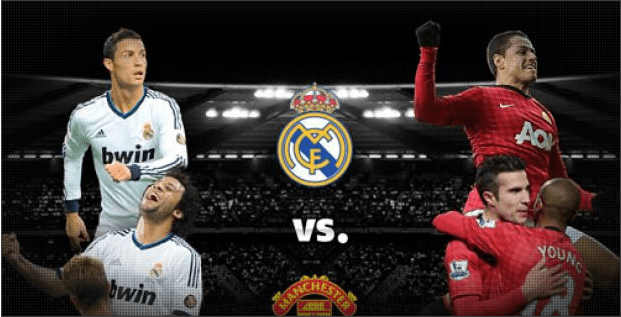 Want to watch Manchester United v Real Madrid live at Old Trafford on March 5th? Enter a prize draw to win two tickets by using #HaveYourSayInMadrid or #HazteOirEnManchester on Twitter. Jump through to the contest site (tickets are courtesy of bwin), or see more details below.

But as Gary Neville has astutely pointed out, this is one of those games that you can’t predict. Both teams will go into it with clear, specific strategies and it will depend on who does their job better – not to mention a tiny but of luck as well.

In previous years you could point to the Jose Mourinho factor but the dressing room discord at Madrid has negated that to some extent, even though the team seems to pull out their best performances in Europe.

Whereas with United – they have had their best start ever in the league, are 12 points clear in February and if their form is sustained, they could win the title by a seriously large margin. However, Europe is a different beast altogether and United will need to shed their past timidity and look to score – they simply don’t have the defenders of 2008 and 2009 to help them sit back and absorb the pressure.

The first leg (tonight) will be a great game (both teams to score), but the return leg at Old Trafford is guaranteed to be a spectacularly exciting game (Unless United or Madrid blow away with a 3-0 lead).

And courtesy of bwin, you could be watching that match live at Old Trafford on March 5th.

Go to http://www.bwinfanchallenge.com to show your support for Manchester United or Real Madrid and you will automatically be entered in to a prize draw to win tickets to Old Trafford for the return leg on March 5th.

Go to http://www.bwinfanchallenge.com to find out more about the competition and see the full terms and conditions.