13th September, 2008 is a memorable date in the history of Arsenal Football Club. On that day, at Ewood Park, as the Gunners coasted to a comfortable 4-0 win over Blackburn Rovers, an English schoolboy made his debut. At 16 years and 256 days, Jack Wilshere became the youngest ever player to play in the league for Arsenal. He had a great future ahead of him, both at the club and international level.

Fast-forward to 6 years later, and the story is not too different. He may have 22 England caps to his name, but Wilshere is still a man with huge unfulfilled potential. A combative midfielder with a very good passing range, the 22 year-old is one of the best central midfielders in the league on his day. But unfortunately for him, and for Arsenal, that day only comes along every once in a while.

Wilshere has a lot of passion for football and for Arsenal. He plays with his heart on his sleeve and is never too shy to go into a tackle or fight for his side. The problem though, is that he isn’t able to consistently add quality to his combative side of play. He is sometimes reckless and thoughtless in his actions and gets into squabbles unnecessarily. He has also been at the centre of some off-the-field controversies, most recently when he was caught smoking cigarettes while on holiday. 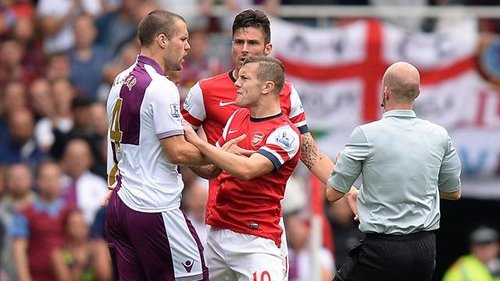 When it comes to the numbers that matter though, Wilshere’s record is merely passable. Despite featuring regularly since the 2010-11 season, he has only scored 5 league goals for the Gunners, a very ordinary return for a central midfielder. There are games in which he is brilliant, but his consistent inconsistency overshadow his good games.

Role in the side unclear:

Arsene Wenger has deployed Wilshere in several different positions in the Arsenal midfield. He has been played in a deeper role in the pivot in front of the back 4, and also as a number 10 behind the striker. His more productive games have been in the deeper role, but owing to competition from other places, he has been pushed elsewhere. Wenger is determined not to drop Wilshere, and often plays other players out-of-position to accommodate him in the side. One feels though, that the Englishman has to start repaying his manager’s faith soon to avoid being dropped.

Following last season’s 6-0 defeat at the hands of Chelsea, when Arsenal failed to show any character or fight, Scholes singled out Wilshere in his criticism and had the following to say:

‘Jack Wilshere came on the scene and looked a top young player but he has never really gone on. He needs the characters like Vieira next to him to take him to the next level. He doesn’t look any better player now than he did when he was 17.’

Tipped by some as a future England captain, Wilshere has failed to live up to his reputation so far. He has got a lot to offer, there is little doubt about that, but he has to start delivering goals and assists on a regular basis soon enough for the footballing world to take him seriously.