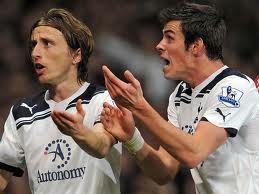 It is widely accepted that most rumoured transfer rumours are made up. They’re made up by newspaper journalists under pressure from tetchy impatient editors who want new, fresh stories that will sell newspapers and garner a load of hits on the internet. So of course journalists lacking imagination get the same players, link them to a few select clubs and vary the transfer fee slightly. So in the case of Tottenham’s stars Gareth Bale and Luka Modric, they link them to Man City, PSG, Real Madrid (all rich clubs and are giants or becoming giants of the modern game) and invent a price somewhere between £30m and £50m.

But in this case, is there a grain of truth in these stories? Are Bale and Modric set to leave Tottenham in the lurch? Do they want to leave? Will Spurs sell them? These are questions that are yet to be answered and which I’ll do my best to decipher with the crystal ball I bought from Mystic Meg.

In this scenario Modric would be off, possibly even to Chelsea. Last summer Chelsea showed interest and were rumoured to have offered Spurs £40m for his services. Modric and his agent made noises about wanting to leave. He didn’t play in Spurs’s first game of the season against Manchester United because ‘his head wasn’t right’ (according to the always honest Henry James Redknapp) and until the summer transfer window closed appeared moody and sullen on the pitch.

His poor shooting and tendency to pass the ball beautifully when the Match of the Day cameras aren’t looking lead to some people saying he’s average. Having watched him for four seasons I can say he’s pure class and aside from Ledley King the best player I’ve seen for Spurs. He’s completed the second most passes of anyone in the Premeirship this season which shows how much influence he wields on the pitch for Spurs. He’s definitely worth the £40m.

Given his quality, his ludicrously low wages relative to other footballers of his stature (reported at around £40,000 a week) and his age (26) which means he only has a few years left at his peak, there’s no way he stays at Spurs whatever Daniel Levy or ‘Arry will say. The question then is where he goes off to. Tottenham will be very keen to sell him to a side outside England. Chelsea and the two Manchester clubs have been linked the most heavily with Modric though. Tottenham will almost certainly publicly say they won’t sell. But offered enough money and with enough pushing and prodding from Modric and his agent, he’ll be off.

I would say it’s very likely he’ll leave even though Tottenham would be in the Champions League in this scenario. Though when I say Champions League I mean the qualifying round play-off (potentially against the likes of Malaga and Borussia Monchengladbach) where Spurs almost came unstuck against Young Boys two seasons ago. Participation in the Champions League group stage is by no means guaranteed and makes it more likely Modric will leave.

I say he leaves even if Chelsea lose the final because a 4th place wasn’t enough to keep him. If Tottenham had finished 3rd, had a guaranteed place in the Champions League group stage and were close enough to the Manchester clubs to suggest a title push may be on the cards, then he may have been persuaded to stay. However Tottenham’s mid-season collapse saw them go from 10 points clear of 4th in February to only taking 4th place on the final day with a lower points tally than what they got two seasons ago with such luminaries as Wilson Palacios and Peter Crouch in the starting XI.

A title push doesn’t look a possibility in the foreseeable future, Champions League group stage participation isn’t guaranteed,  transfer funds will be available though not plentiful (Tottenham’s new stadium will swallow up potential transfer funds for the next few seasons) and with Arsenal, Chelsea and Liverpool set to spend more money while Spurs are more busy hanging on to their most valued assets, Spurs are simply not good enough for Modric and he’s making a quarter of the money he could be earning playing for somebody else. He expressed his desire to leave last season and I can’t see what would have radically changed in 12 months to persuade him to stay. There’s a chance Levy could be serious about not selling him and simply refute all transfer bids, but I’m almost certain Modric is leaving whatever the Champions League final outcome.

If Chelsea win the final and spend Sunday afternoon on their already planned victory parade and Tottenham are demoted to the Europa League, I’m quite sure Gareth Bale will join Luka Modric in leaving Tottenham for pastures new.

Now unlike with Modric, Bale has expressed no desire to leave apart from saying a couple of weeks ago that he’d consider his options were Tottenham not to qualify for the Champions League. Journalists looking for a scoop may dress this up as him banging on Harry Redknapp’s office door screaming “Let me leave you face-twitching wheeler dealer!!!” but to me that wasn’t him agitating for a move like Modric did last summer. That was him being honest, maybe too honest.

Bale is coming off his most prolific season, having four more assists this season than in his previous four seasons combined and more goals this season than ever before. He’s also still only 22. He’s been linked with Barcelona recently which offers the mouth-watering prospect of Barca having Dani Alves and Bale as the least defensive and most attacking full back pairing in the history of football. With offers like this possibly in the offing, it would be almost embarrassing to ask him to play in the Europa League. If Spurs are in the Europa League, Bale won’t be either.

I think he stays. Like I said earlier he seems fairly happy at Spurs, and at 22 he’s got years on his side and may not have even reached his peak yet unlike Modric who even at 26 may be wary about not joining a bigger club until it‘s too late. Another season at Spurs for Bale developing his craft and preparing for a big money move to the cauldron of Barca or Madrid may well be what he chooses.

Of course Bale may decide he wants to leave after all if a big money offer comes in. This is the unknown factor here as although there have been rumours of big bids for Bale’s services before none of them have ever amounted to anything. This summer though sides are eager to spend before the FFP rules properly kick in and the likes of Man City, PSG and Malaga have money to burn. Also the established giants of the European game will not be sitting back letting precocious young talents go to rival teams.

Spurs will play hardball. Levy’s a ruthless negotiator and anyone who can sell Peter Crouch and Wilson Palacios for a combined £20m is to be feared at a negotiating table. With Michael Carrick and Dimitar Berbatov, Spurs talked tough then sold for an inflated transfer fee. With Modric last summer they talked tough and acted tough. Whether they do the same with Bale, and whether Bale wants to leave are not known. However, with Champions League football in this scenario on the table, Spurs surely not keen for too many of their best players to leave and Bale not conspicuously unhappy at Spurs, I would say he stays at Spurs.