John Terry’s season just seems to go from bad to worse. Chelsea coach Ten Cate has admitted to a ‘bust up’ with Terry prior to the Carling Cup Final defeat on Sunday.

“We are both kind of emotional, but we respect each other fully,” Ten Cate told The Sun.

“We just had a discussion about the intensity of the training session. That’s a normal part of the game. There have been a few F-words, no doubt. But that’s common in England.”

With this news, together with the Carling Cup defeat, a succession of injuries and increasing criticism in the media, John Terry seems to be fighting an uphill battle to retain his England captaincy under the new manager. Fabio Capello has yet to decide whether Terry will continue to captain his side as he did under Steve McClaren.

I have previously questioned Steven Gerrard’s suitability as England Captain, but he took the role in the only game under Capello so far and saw England through to a victory with a man of the match performance. Terry was unavailable for that game and Gerrard made a decent case for keeping the job.

We will get some idea of Capello’s thinking when he selects his captain for the friendly in Paris next month. Hopefully Terry will avoid injury and will be available for that game.

There is absolutely no doubting John Terry’s standing as a player.

With Chelsea he has won two Premier League titles, two FA Cups and two League Cups. He has 42 England caps and has been the captain of the Country since 2006.

There is absolutely no doubting John Terry’s standing as a captain.

Before their alleged falling out Jose Mourinho referred to John Terry as “The best centre half in the world” and “The perfect captain.”

When players were asked to name their perfect captain by World Soccer Magazine in July 2007, the following quotes were some of those printed about John Terry.

“Even from the outside the game you can appreciate that John Terry is the boss of the Chelsea side in all ways.” Cesc Fabregas, Arsenal.

“You can see that everybody always looks for John Terry on the pitch. He is vital for Chelsea.” Gabriel Heinze, Real Madrid.

“John Terry is the perfect skipper. It’s obvious Chelsea means everything to him. When he makes those last ditch blocks, team-mates can’t help but be inspired.” Kasey Keller, Fulham FC.

So why should there be any doubt about John Terry’s suitability to be England Captain?

There has always been some concern about John Terry’s off field behaviour. There have been allegations of drunkenness and gambling problems, together with the usual tabloid sex scandals and his arrest for an incident outside a nightclub back in 2002. At that time he was breaking a club curfew and serious questions were raised about his own standards of discipline.

It should, of course, be remembered that John Terry is only 27 years old now, and was therefore only 21 at the time of his arrest.

His age is one of the relevant issues. At 27 he should be reaching his peak as a centre half and captain. Although being constantly disrupted by injuries has to be taken into account, there are still serious question marks about whether JT is performing either role as well as he has done in the past.

His leadership qualities are still clear to see, and the team talk given at half time in extra time at Wembley on Sunday was clearly delivered by Terry rather than the manager and his rallying call since that defeat sums up all that is good about him.

“The determination and passion is still there among all the lads,” he said. “They hate losing, whether it’s in a small game or a big game. I just can’t believe that we’ve not played. As a team and as individuals, we just weren’t good enough. It’s tough to say but Tottenham deserved to win. We didn’t keep the ball as well as we can do. Overall, we weren’t at the races. We’ve gone to some tough places in this competition and won and then we’ve blown it.

“We can do one of two things: we can either dwell on it, and end up getting knocked out of another competition, or we take this defeat on the chin, pick ourselves up and go again.”

Attitude, Petulance and the Press

The main area of concern about John Terry at this time seems to be that he has got “too big for his boots”. His constant arguing with and laying hands on, referees appears to be getting worse.

Former referee Graham Poll said at around the time of his book launch, “I don’t think John Terry should be the England captain.”

It followed Terry’s £10,000 FA fine last season for accusing Poll in what was found to be ‘an utterly unfounded allegation’ that Poll had produced a deliberately falsified account of his red card at Tottenham.

Poll said: “Terry had his version of events proven false and then was not big enough to apologise or even acknowledge publicly what he had done. You will make your own judgment about whether that behaviour befits an England captain. I know what I think. It wasn’t conduct becoming of an England captain. JT, have a look at yourself.” 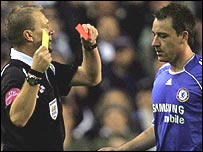 Perhaps most damaging of all, the press have turned against him. They are a notoriously difficult group to escape from once they have the claws out for you.

“The ugly confrontation â€” just 24 hours before Chelsea’s Carling Cup final defeat by Tottenham â€” was watched by shocked owner Roman Abramovich. Eye witnesses saw Ten Cate aggressively face up to skipper Terry during Saturday’s session.
The pair went head to head, hurling a tirade of swear words and insults as players dived in to separate them.” The Sun.

“Terry is England’s best-paid footballer after agreeing a five-year, £131,000-a-week contract this summer. In initial negotiations he had requested a ‘limitless parity’ clause to ensure he was the club’s biggest earner for the duration of a proposed nine-year term. According to a Chelsea insider Terry also wanted – and was refused – a contractual option for him to manage the club at the end of his playing career.” The Guardian.

“Having watched Terry over the last year, his speed of thought and ability to change direction has been below the standards he set previously.” Stewart Robson, Daily Telegraph.

“…whispers of concern about Terry’s general fitness and suggestions that he may be struggling long-term to meet the week-in, week-out demands of the Premier League.” Harry Harris, Daily Express.

“John Terry will confront Avram Grant and demand to know why he has been left out of Chelsea’s Carling Cup Final team – if he misses the Wembley showpiece with Tottenham.” Daily Mail.

“Presentation led by John Terry, who is shaking his head from side to side and looking particularly cheesed off, Chelsea’s players tramp up the 107steps to collect their losers’ medals from Lord Mawhinney.” Guardian Blog from Carling Cup Final.

Most worryingly of all, JTs claims to the Captaincy are supported by Steve McClaren!

“The bottom line is that Steven Gerrard doesn’t need to be England captain, but you get an extra 10% from JT if he’s in charge,” McClaren told the News of the World.

He added: “I’m not saying John is less of a player when he’s not captain but, since he was a kid, he’s been used to being a leader on the pitch. Stevie is similar to Beckham in that he leads by what he does on the pitch. John is totally different. He gives orders, he organises people and he’ll put his body on the line every time.”

That is all JT needs at this time, support from that muppet!