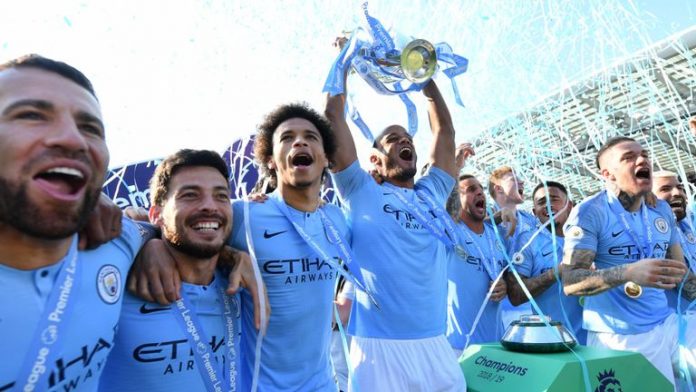 Premier League season 2018/19 represented the third campaign in succession that Liverpool, along with the Manchester clubs and London’s top three teams, made up the top six of the table.

With regular European football always on their agenda, these six teams can only contemplate getting more powerful.

However, even within that group of six, there is an emerging divide between the top-two last season and the remaining quartet.

The gulf between Liverpool and third-placed Chelsea was a massive one, so just how much of a chance do the other four ‘elite’ teams currently have of making 2019/20 a ‘three-horse’ title race?

Shorn of Champions League football after an appalling end to 2018/19, Manchester United will see their wage structure put to the ultimate test in the coming year.

Champions League qualification for 2020/21 is an absolute must, but United can only improve upon last season’s miserable effort. While Romelu Lukaku and Paul Pogba have continued to enjoy their respective sagas amidst a deteriorating mutual relationship, United’s work has been slick and efficient this summer.

Most prominently, the signings of Harry Maguire and Aaron Wan-Bissaka has done much to give United’s porous defence a fresh injection of pace and composure. Both men have natural ability on the ball, and particularly in the case of Maguire, United now have a dangerous presence from set-pieces – something severely lacking last term.

If Solskjaer can get Pogba performing well, United are capable of jumping up from sixth to second place this time around.

Can United do it?

With the Premier League becoming ever more lucrative, it is inevitable that the top-two’s current dynamic will change.

At the turn of the century, few could have comprehended the sight of Arsenal and (ironically) United being anywhere but in the top-two. However, that configuration did not stand the test of time for much longer, with Liverpool, Leeds United and Newcastle United each getting a taste of the podium soon after Y2K.

Though both clubs have the resources to maintain current standards, neither Manchester City nor Liverpool appear to have any practical room for improvement, and time itself is one of football’s greatest equalisers in the long-term.

With City favoured to win the Premier League by many experts, the title itself appears to be in safe hands for now. However, given their efforts in the transfer market alone, United should certainly consider Liverpool’s expected runners-up spot to be fair game come May 2020.

In light of United’s big-spending ways, and evident ambition in the near future, it is easy to forget that there are other teams with title-winning aspirations. They are, of course, London’s ‘big three’, and all connected to each club know just how important 2019/20 could be for an entire generation.

Chelsea’s transfer ban, along with the decision to appoint the passionate but inexperienced Frank Lampard as manager, and the departure of Eden Hazard, has created a perfect storm at Stamford Bridge. This storm threatens to cast the Blues further than ever from title contention.

Given that Lampard has yet to prove his credentials in the transfer market, much of the 2019/20 campaign will be about Lampard selling a vision to Roman Abramovich. Results notwithstanding, that itself will be difficult, with the Russian oligarch traditionally valuing trophies and short-term success over the ‘promising future’ Lampard wants to build.

This opens the gate to a potential creative difference between Lampard and Abramovich from the outset. Results are a different matter entirely, but any cracks in his relationship with the man upstairs could see him share the same fate as fellow Chelsea alumni Roberto Di Matteo, and spark unrest amongst the fans.

The transition from Maurizio Sarri’s reliance on a deep lying playmaker, to Lampard’s own tactical agenda, will also be a huge acid test for the five-time Premier League winners.

Trophyless since 2008, the pressure on Spurs to emulate their peers as part of London’s ‘big three’ grows year on year. A good start to 2019/20 will be essential, but few people envy the start that Spurs have been granted by the fixture computer, especially with trips to three of their peers in the top-six making up a majority of their first five away league fixtures.

Appallingly, after spending most of the last two years as the form team in the away table, Spurs lost their last six away fixtures of the 2018/19 league season, and – after a 3-0 drubbing of United at Old Trafford a year ago – have lost their last four league games at top-six venues.

Addressing this is just one small part of Spurs’ quest to end the lack of silverware. As evidenced by Christian Eriksen wanting to leave, the longer this drought goes on, the more difficult it will be for Mauricio Pochettino to retain what remains of his core talents.

On a happier note, the likes of Kane, Alli, Son and Moura have shown no inclination to move on, and this sustains Spurs’ potential to again be City and Liverpool’s closest rivals.

The latter two men in that top-tier group of Lilywhites were especially potent in Tottenham’s run to the Champions League final.

Even though his loyalty appears to be unwavering on the surface, Pochettino himself may be secretly tempted to move on. The general feeling is that Spurs’ appearance in the Champions League final was a once-in-a-lifetime phenomenon, and the players seemed overawed at times, missing many vital opportunities to equalise before the death knell.

Ultimately, time is running out for Spurs to finally develop the same killer instinct as City, Liverpool and Europa League winners Chelsea, and something will eventually have to give.

With the Gunners facing two of their top-six peers on the road before the end of September, it seems as though Spurs are not the only team in North London that will be severely tested in the opening weeks of 2019/20.

Significantly, Arsenal lost seven of their final thirteen away games in the 2018/19 league season, with six of those seeing them net precisely nothing in the fifteen minutes immediately after half-time.

This statistic is a damning one, as it belies the reputation Unai Emery once boasted as a master of the half-time change. No team with genuine title ambitions should ever emerge weaker from the dressing room after a frustrating first half, but there have also been some mitigating circumstances, left behind by the drab affair that was Arsene Wenger’s latter days as the Gunners’ manager.

Though he always split opinion and had a chequered injury record, Aaron Ramsey’s departure for free can only be a negative where squad depth is concerned. However, the £25m arrival of Kieran Tierney gives Arsenal’s defence a fighting chance of battling on two fronts, and there can be no denying that Emery showed great courage and foresight in signing Ivorian attacker Nicolas Pépé – albeit for a staggering £72m.

If any team is going to finish furthest away from the title race, it will be Arsenal. Most of the arrivals from last summer still look like players in transition, but the club’s presence amongst the favourites to win the Europa League is a convincing one, and they may have just enough to get over the line if the draw is favourable.