Useless. Flop. Goddamn waste of money. Adjectives are not too hard to come by when Fernando Torres is the topic of discussion. Few footballers have fallen as far and as fast as the former Liverpool hit man has in the past 2 seasons.

Once feared by the world’s finest defenders and revered by Kopites the world over, the Spanish striker has suddenly become something of a cruel joke in the Barclays Premier League and his name is conspicuously absent when most goalscoring football tips are mentioned. So indelibly has he left his mark in England that his very name has taken on added meaning in the English language:

Example: What a nando from Torres!

Verb – to miss an easy goal scoring opportunity by seemingly defying the laws of Physics.

But Chelsea didn’t shell out a whopping £50M for Torres to coin words. They need the troubled Spaniard to start hitting the back of the net with regularity. In order for that to happen however, they need to get Torres the one thing he desperately needs – a psychologist. What is psychology going to do that countless hours of training haven’t been able to? The answer is simple; rather than moaning every time Torres misses yet another golden opportunity, a psychologist will address the source of the problem. Consider these points:

Many commentators like to claim that Torres “doesn’t look fit.” This, of course, is absolute bullshit. Fernando Torres has been available for selection for every single Chelsea game this season bar three – Bolton (away), Everton (home) and QPR (away). And even for those 3 games, he was not missing due to injury. Rather, Mr. Torres was serving a 3 game suspension after picking up a senseless red card versus Swansea.

So Torres is fit. And if even if you’re one of those nitpickers who distinguish between “fitness” and “match fitness” then we can still confidently say that Fernando Torres is match fit. The Spaniard has made 18 appearances in the league to date, even if quite a few have been from the bench. He’s been in the rough and tumble, he’s had to chase balls (haha!) and he’s also been given an extended run in the first team, especially with Didier Drogba off playing in the African Cup of Nations. Clearly then, Torres’ problem is not merely a physical one.

Is Chelsea simply asking too much of poor old Torres? Is Andre Villas Boas demanding the impossible? Hell no. We all saw what Torres did at Liverpool. Is the striker just “past it” then? Over the hill? Unlikely, at 27 years old the lad still has time on his side.

Admittedly, he has shown glimpses of his glorious best on occasion this season: small bursts of speed, clever assists as well as a few deft touches here and there have all been noticed and clutched at by desperate Chelsea supporters. Even if Torres’ performances have been dreadfully inconsistent, it is obvious that ability is not his major problem. He can do all the things he is being asked. He just isn’t.

The harsh reality, dear readers, is that Fernando Torres’ biggest obstacle to recapturing his former glory is his mentality. The man is royally screwed upstairs. Let us address 2 key issues: 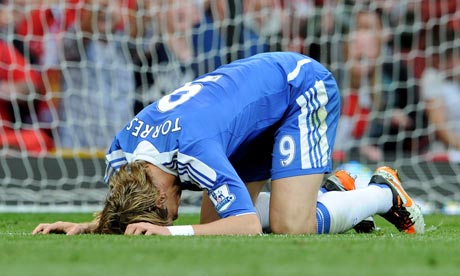 Is there anyone in the Premier League who is under more pressure right now than Fernando Torres? Perhaps not. The hapless duo of David de Gea and Steve Kean are in with a shout, but their troubles only began in August. Torres has been under considerable stress ever since the departure of Rafa Benitez from Liverpool in June 2010.

Hampered by niggling injuries after a goalless World Cup, Torres never really regained his explosive pace and sharpness under new Liverpool boss Roy Hodgson. The drop in his on-field performance, coupled with on-going frustrations with then Liverpool owners Tom Hicks and George Gillette ultimately led to his acrimonious transfer from Liverpool to Chelsea in January 2011.

But unknown to (or ignored by) Chelsea was the fact this this was not the Torres of old. Their new signing arrived in London with a lot of mental baggage. Torres was already under extreme pressure to recapture his lost form but now he also had to adjust to new surroundings, prove himself to a new club, face intense competition for a starting berth as well as justify his British record £50M price tag. Mix all of that with the ever present media pressure that hounds Premier League players on a daily basis and what you’re left with is a high-stress cocktail that few people can swallow.

Working in high pressure environments will always cause stress, and stress leads to anxiety. For world class athletes though, performance anxiety can be a motivating factor that’s spurs them to excellence. Increased anxiety leads to increased arousal and if this arousal is within the athlete’s optimal functioning zone, then it will lead to better performances. Pressure can bring out the best in football players. That is why we often see the best matches at major tournaments like the Euros, the Champions League or the World Cup (in the high pressure knockout rounds).

However, no one performs optimally under extreme pressure. Too much pressure will result in excessive arousal outside of the optimal functioning zone and that causes a significant drop in performance.

Fernando Torres needs to realize that being nervous is natural. He needs to harness his anxiety and use it constructively to improve his performances. He is simply becoming too worked up. He needs to relax. If he can’t manage to do that, his woeful form will continue to haunt him as the season progresses.

Trying too hard without success leads to physical as well as mental frustrations and is a classic sign of a player in a slump. And let’s not ignore the facts; Fernando Torres is in a helluva slump. His confidence is shot. Scoring 2 goals in 23 games can do that to a guy. We can only imagine the mental turmoil he experiences each time he sees Andy Carroll ahead of him in the scoring charts.

The danger of suffering from low confidence is that the situation can quickly spiral out of control. Low confidence leads to a drop in motivation, which in turn causes decreased performance, ultimately resulting in even less confidence. It is like a vicious cycle, which if left unchecked, can completely destroy a player’s season or even his career.

So what can Torres do to help himself and get out of this rut? He needs to focus on the simple things. Uncomplicated gameplay will increase the chances that attempted actions or tasks are successful, resulting in elevated confidence levels. No more flick ons or backheels or stepovers for Pete’s sake. The groans of the crowd when those “tricks” fail to come off are far more damaging than you might think. Just run and shoot, Fernando. That’s all you have to do. Something is bound to go in sooner or later, and when it does you need to milk it and build from there.

As for you Chelsea FC, if you value your£50M investment at all, please get off your collective asses and get this man a shrink. “Run and shoot” is a simple enough command, but we wouldn’t want poor old Torres to take it out of context, now would we?

The author, Demetrie Thompson, is a lifelong football fan and the editor of What Is Psychology.