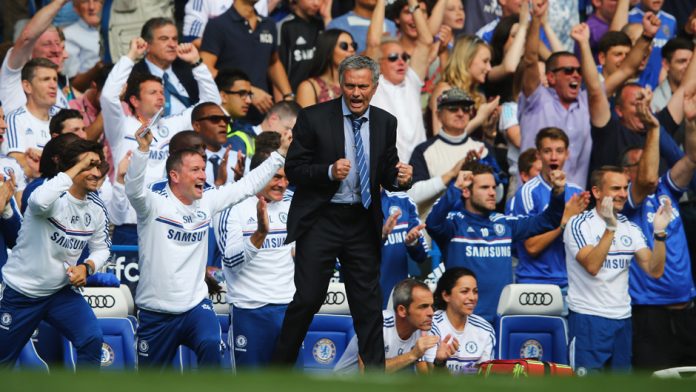 Jose Mourinho oozes confidence. Happy or special or whatever, the one thing about Mourinho that hasn’t changed and will never change is that the man is sure of himself. He believes in his ability, and he does things his way. So it didn’t really come as a surprise when Fernando Torres, once owner Roman Abramovich’s golden boy, was left entirely out of Chelsea’s squad to face Aston Villa last Wednesday night at Stamford Bridge.

Torres’ name was in the starting lineup, and it wasn’t on the bench. Instead, Torres got a seat next to the injured David Luiz in the stands at Stamford Bridge for a highly-charged clash eventually won 2-1 by Mourinho’s side. It’s a far, far cry from just a year ago at Chelsea.

One year ago, Chelsea were playing a Wednesday night fixture at Stamford Bridge against Reading, the game being moved up do to Chelsea’s UEFA Super Cup commitments the following Friday. Torres started and played 90 minutes, scoring the final goal for Roberto Di Matteo’s side in a shaky 4-2 win.

When Di Matteo was reluctantly handed the Chelsea job on a full-time basis almost a month after winning the Champions League, the mandate given to him was to play Torres. Di Matteo wanted to bring in reinforcements at the striker position, but he was told by the Chelsea hierarchy in no uncertain terms that it would be Torres or bust.

It didn’t take long for Di Matteo to go bust, and it was because he couldn’t get Torres firing. In the Chelsea legend’s last game as boss, a 3-0 humiliation against Juventus that for all intents and purposes knocked Chelsea out of the Champions League, Torres was left on the bench.

It was RDM’s version of Andre Villas-Boas’ “suicide note” lineup at Napoli in the Champions League the previous season. Di Matteo, so fed up with Torres, left him out and played with no recognized striker – Chelsea were woefully undermanned at the forward position last season because the club didn’t want to buy anyone to get in the way of Torres.

Di Matteo’s hands were tied, and he was given a pink slip the next day. It’s not as if Robbie Di couldn’t see the situation coming, but he was overruled by Chelsea’s brass. It was just another in a line of examples where a Chelsea boss – under constant threat of the sack – had to cow to the demands of ownership. Just ask Carlo Ancelotti, who was forced into playing Torres ahead of Didier Drogba before his ultimate demise in 2011.

Ancelotti, Villas-Boas, Di Matteo – all accomplished, talented managers. But none of them boast the pedigree, charm, and power of personality of Jose Mourinho.

After the end of interim manager Rafael Benitez’s reign, Chelsea were in desperate need of a powerful man in the dugout. A man who could stand up to Roman Abramovich and decide what was best for the club without the threat of the axe in the back of his mind. The Blues needed a man with the chutzpah to say, I’m doing it my way, and the track-record to back it up.

Mourinho is the man at Stamford Bridge. He is a force too powerful and charismatic and successful to be ordered around. AVB and Di Matteo, who both took the Chelsea job with no Premier League experience, couldn’t walk into Abramovich’s office with their own transfer list and not be laughed out of the room. You don’t laugh Mourinho out of any room.

Chelsea go to Old Trafford to face Manchester United on Monday night. It’s the first big game of Mourinho 2.0 at Chelsea, and the David Moyes era at United. It would be a major surprise if Romalu Lukaku doesn’t start up top for Chelsea, and whether or not Torres is on the bench will most likely serve as a minor footnote, if that.

It’s certainly a possibility that Abramovich has cooled on Torres – how could he not? But Mourinho could simply make him disappear.

When Villas-Boas took his only trip to Old Trafford as Chelsea manager, Torres famously missed an open goal, leaving the Portuguese’s face riddled with the same kind of anxiety and disbelief as he is feeling right now, as Mourinho has, at the 11th hour, hijacked Tottenham’s deal for Willian.

Villas-Boas’ Spurs have had a terrific transfer window. Now Mourinho has made his former understudy look like a fool, and laughed in his face. Only one man in football can do that. It’s Jose.

The manager should be the most important football man at a football club. Not the owner, or the players, and the balance hasn’t been right at Chelsea since Mourinho walked off the field for the last time as Chelsea manager in November 2007. Now, with the Special One back, the balance has restored. You don’t mess with Mourinho, and Chelsea are better off for it.