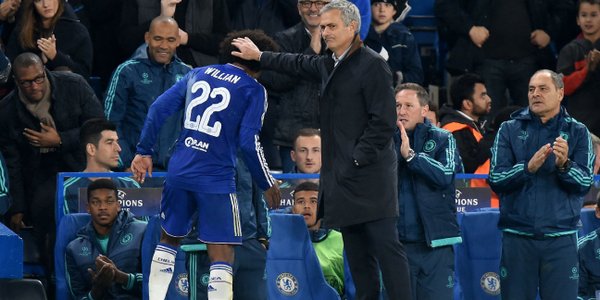 After Round 4 of the Champions League group stage games, the two London clubs find themselves in a contrasting position.

Chelsea struggling badly in the Premier League are close to qualifying to the knock out rounds following their 2-1 win over Kiev, while Arsenal, the joint-topper in the league, are facing the scare of an early elimination from the competition after being outclassed 5-1 by Bayern Munich.

An outstanding free-kick from Willian gave Chelsea a crucial UCL victory and eased the pressure on manager Jose Mourinho.

The under-pressure manager looked to be heading for more frustration when Aleksander Dragovich equalised for the visitors with only 13 minutes left.

But thanks to a spectacular 25-yards free-kick from Willian, Chelsea collected three valuable points from the match and are one step closer to qualifying for the knock out rounds. If they take four points from their final two matches, the Blues are assured of reaching the round of 16 knock-out phase.

Mourinho received an “amazing” reception from the home fans, who sang his name loudly throughout the match.

The Chelsea boss on the home support, per BBC Sport:

“I have no other way to thank them than to give everything I have, which I do always.

“The fans recognise I’m a good pro, brought a great moment and have had great memories. Until my last day in this club, if that is in four years, 10 years, 15 years, I will give everything to them.”

“He’s playing very well, not just today. He has been playing well for a long time. Everybody did their job very well. It is fair to look at Willian because of his work rate, quality on the ball, participation in the first goal and quality of second goal.”

Mourinho on the crucial UCL victory:

The win is a big relief. The players deserve to get compensation for their hard work.

The difference today was that we had confidence in the negative moment. The negative moment is always arriving for us. We had that good reaction against Stoke in the League Cup and today we conceded that goal with 15 minutes to go. I think the team was strong mentally, they kept trying and I’m happy with that.

The scenario is slightly different in North London, where Arsenal face a herculean task to qualify from Champions League Group F after being humiliated by Bayern Munich.

Arsenal were outclassed completely and the Gunners simply had no answers to Bayern’s relentless pressing and ruthlessness in front of goal.

The defeat leaves Arsenal six points behind Bayern and Olympiakos with only two games left. Although Arsenal are still mathematically in to go through to the next round, Wenger says that they have a “small chance” of reaching the knock out stages.

“There is still a chance to qualify,” said Wenger. “We have to realise that our chance is at a minimum.”

“It leaves us short. It will be very tight but we have to fight until the end. Let’s hope Bayern beat Olympiakos and we win at home against Zagreb. That leaves us with a chance to qualify from the last game.

How Arsenal can reach the knock out stage?

Arsenal currently are at the bottom of the Group F table with three points, six points behind both Bayern and Olympiakos.

Arsenal need to beat Zagreb in their next match, and hope Olympiakos lose against Bayern.

In that case, whoever wins the intriguing final match in Greece would go through, although Arsenal need to beat the Greek side by two clear goals margin.