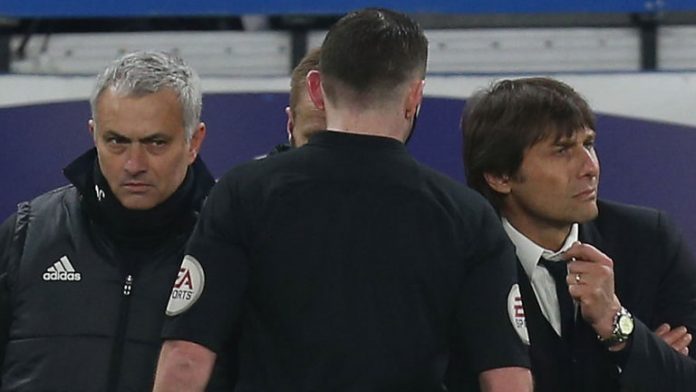 The ongoing feud between Jose Mourinho and Antonio Conte shows no signs of slowing down after the Chelsea boss called his United counterpart a ‘little man’ and a ‘fake’ on Saturday evening.

Conte was speaking after Chelsea’s 0-0 draw at Norwich City in the FA Cup and his comments were in response to Mourinho’s reference on Friday night to a match-fixing scandal which Conte was involved in during his time as manager of Serie B club Siena.

He was suspended for four months while at Juventus for failing to report match-fixing at Siena, but was subsequently cleared of any wrongdoing in 2016.

“I think when there are these types of comments, before making them you have to know very well the truth,” Conte said.

“The truth is that I was banned for four months – for failure to report. Then I asked a real trial by court and then they declared my innocence.

“I think before you make this type of comment, before to hurt another person, you must pay great attention.

When asked which events he was referring to in Mourinho’s past that showed him to be a ‘little man’, Conte pointed out that the Manchester United manager had last year worn a shirt with the initials ‘CR’ in tribute to sacked Leicester City manager Claudio Ranieri, despite mocking his command of English in the past.

“I remember when he offend Ranieri for his English,” Conte said. “Then when Ranieri was sacked he put on a shirt for Ranieri. You are a fake.

“If you want to fight a person, you try to kill this person. And then after two years you try to help this person, because maybe it’s good for you, for your profile.”

The two sides are not due to meet each other until the end of February at Old Trafford, leaving plenty of time for more fun and games between the duo.

We take a look at what could happen over the next few days:

Mourinho turns up for United’s press conference for their game against Stoke City wearing six inch heels and clutching his passport.

He refuses to sit down throughout the presser, shouting wildly throughout that he is not ‘little’ and that his passport proves he is real.

He unveils a video showing someone looking like Conte – but who wasn’t actually him – pocketing a brown envelope stuffed with cash. “See, he IS a match-fixer,” cackles Mourinho.

Over at Stamford Bridge, Conte is shown footage of Mourinho’s antics and he responds with a video of his own, seemingly depicting the United boss (not really him) sat in his hotel room chatting on Skype to Paris Saint-Germain’s owners.

“I’ve told them I want to stay, but please rescue me,” he said. “Despite what the club say, they’ve dumped me in a Travelodge and I need to get away from here as soon as possible.”

Over on Twitter, the Telegraph’s Henry Winter is still bleating on about the League Managers Association ‘mediating’ while dreaming up more ways to ask questions designed to keep Little and Large at loggerheads with each other.

Long may it continue.