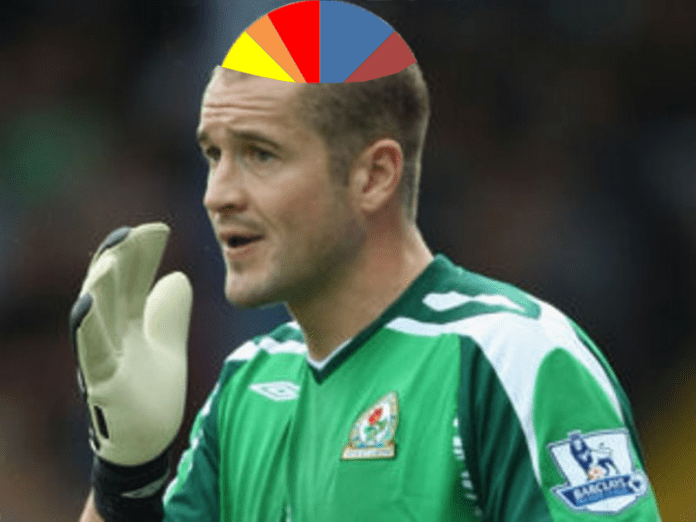 “The goalkeeper is the jewel in the crown and getting at him should be almost impossible. It’s the biggest sin in football to make him do any work.”

The immortal words of ex-manager and panto villain George Graham. Unlike the other twenty players on a football pitch, goalkeepers are not charged with running around the park marshalling certain areas, making tackles, scoring goals and the like. On average, a top-flight goalkeeper will have to deal with four or five shots per game: approximately one goal-bound attempt every twenty minutes.

What of the surplus time? A goalkeeper can only spend so much time rapping his knuckles on the frame of the goal, shrieking at his put-upon defenders or waving idly to the adoring (or insulting) fans. Instead, we take a look at the inner workings of the mind of the modern day goalkeeper. The following report looks at those playing in their respective first teams, and is based largely on their individual intellect, body language and facial expressions. (As an aside, it is not worth noting the mental activity of those goalkeepers warming the bench, for it is common knowledge that they are all consumed with bitterness, hostility and inferiority complexes.)

“And they said hobbling all of my fellow goalkeepers wouldn’t help. Look at me now! Once I bump off the remaining prospects, I’ll be here forever…muwahaha.”

“I hope Tracey’s baked me a proper birthday cake, not just bought me one from Wal-Mart. How old am I going to be? Gosh darn it, I forget. That can’t be a good sign. No matter, so long as I’m keeping Sander Westerveld out of the Liverpool first team.”

“If that hussy of a girlfriend is sleeping with Bowyer behind my back, I’ll…Who am I kidding. Lee would rip me apart. I’ll just ask him nicely to stop. If he says no, I’ll cower at the near post. Good thinking, Ben.”

“We’re all just specks of residue in an expanding and relentless cosmos, which runs concurrently with and against an infinite number of universes that we cannot even begin to understand. Thus, a clean sheet is irrelevant in the grand scheme of things. It’d still be nice, though.”

“I love the size of these gloves. They make my hands look bigger than my head!”

“I wonder if one of the ball boys will just let me hold one of their spare footballs for a few minutes. I just want to feel the padded isotropic material between my palms again.”

“I’m sick of this hat messing up my purty hair.”

“If I had Petr’s hat, I could smash my way through the field and do my funky touchdown dance.”

“Another grey-skied day. Surprise surprise. No wonder I have to spend two-thirds of my wage packet on fake tan.”

“If the ball doesn’t come this way soon, I’ll have to punch at something else, like the back of Carra’s head.”

“I wish my girlfriend could cook, rather than just standing there looking incredibly hot. I’d love something for dinner tonight that wasn’t picked up from McDonald’s. Actually. I’d love some Chicken McNuggets right about now.”

“I hope I won that beautiful 19th century mahogany rocking chair on eBay. Was £200 a high enough maximum bid? Only time will tell.”

“Just when I’ve lulled the fans into a false sense of comfort and security, I will do the scorpion kick at the opposition’s next corner. They will love me for that!”

“I look ridiculous. I don’t care what anyone says, Wilkinson Sword is not the same as Gillette. Not even close!”

“Why on earth did I trade somewhere that was actually developed and stable for places like Bolton and Wigan?!”

“I can’t wait to see the look on the gaffer’s face when I tell him that I’m actually Mike Stowell in disguise.”

So there it is. A goalie’s mind is sometimes a Machiavellian one, or is concerned with vanity, self-importance, eBay and hunger: qualities expected of outfield footballers, but not their gloved counterparts. This does not apply to Jussi Jaaskelainen. Even when he’s not on the ball, he’s thinking about the ball. Always.

This article constitutes satire. Despite the use of real footballers, the events discussed within the article are humorously fictional, and should not be taken deadly seriously. Also, many thanks to Ronaldoh for bringing the opening quote to my attention.