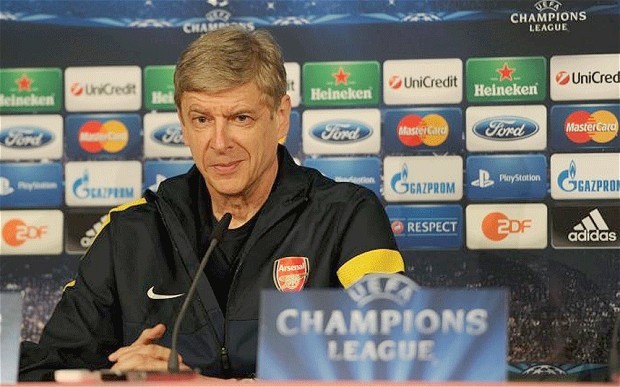 Arsene Wenger knows the value of a good line at a press conference.

On the eve of the 2-0 win over Crystal Palace that maintained Arsenal’s place at the summit of the Premier League, Arsene Wenger sat in the standard pre-match press conference, answering the same questions he received week after week after week.

How would his team perform against a weak Palace side? How would they bounce back after their loss to Dortmund? etc etc etc. For Wenger this was all too easy, he had been holding court like this since 1996 and knew what to say and when to say it.

The media were looking for easily interpreted phrases or slogans they could paint across their headlines and earn their days pay. The questions rolled and answers followed, all with Wenger’s trademark considered patience. From somewhere in the back a hand was raised, Wenger caught the motion from the corner of his eye and nodded in its direction, signalling the one responsible to ask his question. He listened as the reporter queried Wenger on the release of his old nemesis, Sir Alex Ferguson’s, book, for which he was honored enough to get a full chapter in.

Wenger paused for a moment, seemingly contemplating his famous battles both on and off the pitch with this greatest of managers. A half smile seemed almost to appear on his thin lips before he opened them to answer. He stated that he had not had the opportunity to read the book but thought it seemed as if Ferguson had written or at least recorded much of it whilst still managing. He then paused for a moment while a follow up was asked before cheekily throwing a juicy steak to the starving wolf pack. “Will Sir Alex ever come back?” the question was innocent and simple enough. The eyes of the room turned to the Arsenal boss who took in a breath before replying, leaving the room poised, waiting for his response.

It had taken many years for him to truly appreciate these moments and to take full advantage of them but his experience now proved invaluable. “In six months we’ll know more about that. You cannot rule it out completely. Its difficult to take a drug for 30 years and suddenly get rid of it.” Wenger just threw it out there like it was just another answer but it wasn’t. He noted with immense pride the frantic scribbling going on as the reporters fought to record his every word for later publications. He knew that out of everything he had said that would be what caught the imagination of editors waiting for juicy stories in their offices. It was all too easy.

What is simple to dismiss as simply one manager putting forward an opinion about the future of his former, now retired, rival, is in fact a well worked piece of media management, designed to further increase the pressure of beleaguered colleague David Moyes. A manager who is still desperately searching for a way to escape the omnipresent shadow that Ferguson casts over Old Trafford and beyond. A shadow that has only loomed larger  with the release of his biography only a few days earlier.

Wenger, a master of the arts of manipulation, knows the pressure that comes with being manager of a big club, knows the effect that negativity can have on a team, after all, prior to the signing of Mesut Özil his own team found themselves lambasted by all and sundry; and he was more than happy to keep the torch firmly on the Red Devils new man. Many managers would have refused to comment on the going ons at other clubs but Wenger, like Ferguson himself before hand, knows that when your opponent is down, do everything you can to keep him there.

David Moyes is still struggling to make his mark at Old Trafford.

With Man United winning, although again very unconvincingly, against Stoke the pressure valve at Old Trafford has been eased just a little bit. One can imagine that if Moyes can eke out a couple more wins the confidence and swagger may just return to Old Trafford and they could still push for another Premier League title, the season, as they say, has a long way to go. What will be an interesting byline however, is whether we are beginning to see the first seeds in a significant rivalry between Wenger and Moyes as they battle to gain the upper hand in the game of minds and media. Only time will tell.