Arsenal manager Arsene Wenger feels that club’s record signing midfielder Mesut Ozil is putting too much pressure on himself. With a price tag of £42.5m, hanging on his shoulders like an Albatross, he carries an extra amount of pressure with him, which has proved too heavy at times. 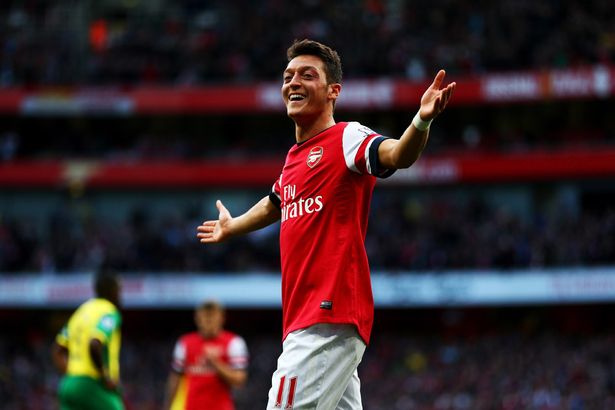 The Germany international has had been criticized fiercely in the media for his poor performance in the Champion League against Bayern Munich. Ozil was left distraught after missing the penalty in the Champions League last-16 first-leg defeat at home to Bayern last Wednesday and didn’t feature in the weekend Premier League match against Sunderland at home. Though, official explanation was given that he was suffering a dead leg.

Arsenal gave all his players couple of days off and Ozil took the opportunity to return to his homeland and spend some time with friends and families.

“I never tell Mesut: ‘You have to win us the game,'” Wenger said as quoted in The Guardian.

“He shouldn’t do that. It’s down to the performance of the team. But maybe he feels that a bit in a different way than I do. I just want him to enjoy it and play well.

“It is difficult for him mentally to be confronted with that pressure every three days and in every single competition. But he will adapt. He had a difficult game [against Bayern] because he missed that penalty and it was on his mind. Sometimes, when you are under this kind of pressure, it’s good to refresh.”

Wenger has no doubts about Ozil’s caliber to rediscover the form he showed earlier this season when he joined from Real Madrid. He looked sharp in the training and is expected to feature against Stoke City on Saturday.

Wenger added: “He has gone a little bit through a difficult time. It can happen to anybody. He looks all right. He loves to play. You give him a ball and he’s happy. That’s the most important thing. And he has the quality. You always have to be behind your players. The best way is to show him support.”

Ahead of the match, Wenger has few selection doubts over the left-backs Kieran Gibbs (hamstring) and Nacho Monreal (foot) but club skipper Thomas Vermaelen is fit to play again.