This summer is going to be mental for Manchester United. The Red Devils are expected to involve heavily in the transfer market, with new manager Louis van Gaal looking to sign four or five top quality players. 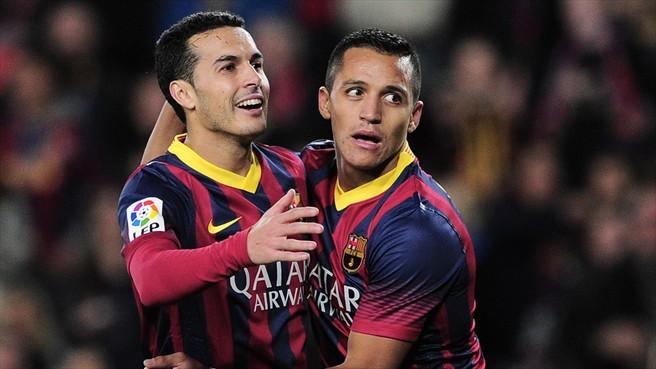 According to reports in Spain, Manchester United have targeted three Barcelona players, worth around €75m in the summer.

Yesterday, Spanish newspaper Mundo Deportivo reported that United are plotting to sign either of Alexis Sanchez or Pedro Rodriguez, both would cost €25m each. Also, reports emerged that Manchester United have targeted left back Jordi Alba as well, who has a market value of €25m.

Barcelona are willing to sell Sanchez for €25m, a fee that United are ready to pay – however, Sanchez is reportedly not interested in playing in the Premier League at all. He’d much prefer a return to the Serie A to join Juventus, but the problem is The Old Lady are only offering Barcelona €15m.

Likewise the future of Pedro is also uncertain. The 26-year-old recently said in an interview that he is unsure of his stay at Nou Camp.

Alba is seen as a potential replacement for Evra, along with Luke Shaw, and Van Gaal has asked the club to try and sign him. If the reports are to be believed United are close to signing Shaw and should they conclude a deal for him, hard to see the Red Devils going for another left-back in the summer, but in case, the deal falls through, Alba could be the perfect replacement.