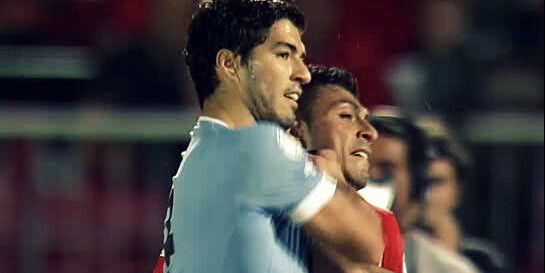 Luis Suarez always grabs the headline in one way or the other. The Liverpool forward is well known for his gift of sublime skills and extra-ordinary ‘genius’ abilities on pitch, but he has a darker side too which time and again comes into the forefront eclipsing all his good work.

On Monday night, while playing against Chile, the Uruguay international punched Gonzalo Jara in the face which unfortunately went unnoticed in the referee’s book.

Hopefully we will have an excuse from Suarez and few will support him too, but it was clearly evident from the replay that he was simply venting out his frustrations on that player, as Uruguay suffered a 2-0 defeat that night, further jeopardizing their chances of qualifying for the World Cup in Brazil.

The 2010 World Cup semifinalist and 2011 Copa America champions are sixth in the table and have failed to win in six straight games. They could further lose ground in the table, if Peru wins their game in hand.

Oscar Tabarez’s side has been awful in all departments of the game and their form has taken a drastic drop by the turn of the new year. They played three matches (one international friendly against Spain) and have faced two defeats and one draw.

In the qualifying rounds, La Celeste have scored 17 goals so far, with Suarez leading the goal scoring chart with eight goals. However, in the last six matches, they have only managed three goals. The cause for concern is huge as goals have dried up despite the presence of Edinson Cavani and Suarez in the team – the top scorers of their Serie A and Premier League respectively.

However, it is the fragile defence of Uruguay that is causing lots of headache. Tabarez said was quoted in the press before the match against Chile:

“We’ve committed a lot of defensive errors that cost us points. A performance often is related to results (and) a positive result is what can change everything at the moment.”

They have conceded 21 goals in 11 matches, while 15 of those have come in the last six matches only. Of the remaining five matches left, Uruguay will face three tough opponents – Colombia, Ecuador and Argentina in succession.

Suarez was booked for protesting later in the game and will miss the next qualifying game against Venezuela. The matter could get worse if he is found guilty for his latest conduct and he might miss more matches.