Manchester United lost at the weekend. A torrent of statistics clutter the pages of the morning’s papers. The worst start to a Premier League by any side since dinosaurs roamed the earth. Certain relegation awaits. Sports journalists everywhere fully exercising the ‘thesaurus’ function on Microsoft Word to litter their texts: banal, insipid, uninspired, bland, . I hope even to read one referring to ‘pablum’, an American “brand of soft, bland cereal for infants”. Possibly in the Guardian.

Suddenly even Everton’s invincible beginning to the season becomes a damnation of David Moyes. He had clearly been holding back the blue Barcelona during his period in charge, and likely even cost them several league titles. The nation’s sporting consciousness has had a tiny plastic hammer rapped against its knee. And it’s reflexes are clearly operating adroitly.

Nonetheless, there are certain endemic flaws with this Manchester United team. These have become horribly apparent in two recent games, and concord beautifully with a narrative concerning a lacklustre Moyes. Yet, they existed before last weekend. Long before last weekend.

The first concerns the centre of the pitch. The arguments are familiar: before the begrudging arrival of everyone’s favourite troglodytic Belgian, Manchester United had not signed a ‘conventional central midfielder’ for seven years. Nick Powell, Shinji Kagawa and Phil Jones all arrived in this period, and Paul Scholes was dragged from his personal exile in Oldham, but none of these individuals sufficiently addressed a clear void. In fact so chronic was this scotoma that Manchester United fans coined their own acronym to describe it: ABCM (Anyone But Central Midfield).

However, this is not the biggest problem facing Manchester United. For years, United’s play has not been directed through the centre of the pitch. In fact, at the dawn of the 2011/12 season, with Cleverley and Anderson scuttling around the middle of that big green rectangle, United seemed to be trying to make the position redundant entirely. Play was based upon rapid breaks and coruscating wing-play. The success of this model would have been inhibited by a considered playmaker who would have slowed and recycled possession rather than shifting the ball forward to capitalise upon broken phases. This was typified in a 5-0 away triumph at Bolton in September 2011. This is an approach that circumvents a problem rather than solves it.

Instead there is an area of the team which is more representative of an endemic stagnation. It is an area wherein the decline is not recent but has continued unabated for several years. It is an area where mediocrity is so notable because it had previously represented such a strength. And that area is in the vast swath of pitch in which a diminuitive dynamo used to rein supreme like a Senegalese Napoleon. 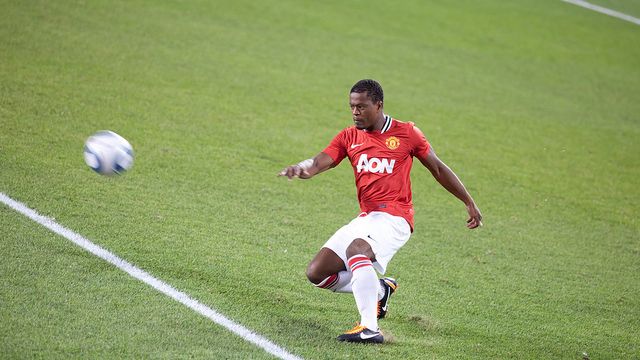 Patrice Evra did not play at the weekend. Defeat against West Bromwich Albion was not his fault. His deputy, the apparent competition for his position, is the clumsy, manic Alexander Büttner. Büttner is one of life’s great triers. But he is highly limited, with ability best captured by a 2012 comment of United’s Dutch scout Ed van Stijn. Stijn claimed that in his list of the best left-backs in the Netherlands that preceding season, Tom Cleverley’s evil twin had ranked ‘number three or four on my list’. Being one of the four best left-backs in a league in which Alfonso Alves flourished is not an immensely clamorous endorsement.

A full back offers a particular influence because of their ability to disrupt the conventional patterns of a game. Poorly trained or selfish wide-men fail to track their runs, allowing the full back to overlap and overwhelm, or to drift inside, creating space for others with their adventure. It doesn’t matter when they don’t receive the ball – their mere presence confuses. A full back is so often the extra man who cultivates the scant space necessary for that vital cross, who proffers that vital moment.

A reluctant or unambitious right back leaves the winger in front of them isolated, able to flit and flight, but without the distractions of a lieutenant toeing the touchline and lurking malevolently in the defender’s peripheral vision. A sluggish left back can allow a terminal loss of momentum in attacks. For a brief period in duals between the ‘big four’ (what strange pangs of nostalgia that period of seemingly inevitable hegemony prompt) these frequently arid skirmishes were jousts between the full-backs.

It was not always success for Patrice Evra since his £5.5m mid-season move from Monaco in January 2006.

His progress over successive seasons was incredible. Boundless energy, quick feet, a springy leap which made him effective in the air. During home games he would rarely spend time in his own half because he could pin back any winger. And when required, would recover expertly.

The highlights are numerous. A 2007 goal against Roma, rolled in off the post from the edge of the box, was the terminal blow in a 7-1 victory. In 2008’s Champions League semi-final, he suppressed an impish Lionel Messi (who, at that point was merely ‘the next Maradona™’ rather than ‘the greatest player in the history of time™’), pressing boisterously high up the pitch so that when Messi received the ball and occasionally wriggled free he was turning gloriously and devastatingly…in his own half.

He was rightly garlanded in 2008/09 in both the FIFPro World XI and the UEFA Team of the Year. For almost any defender this represents the apotheosis of accomplishment – in competition for the Ballon d’Or over the past two decades defenders have figured infrequently: Paolo Maldini was 2nd in 1995. Roberto Carlos was runner-up in the ‘Year of the Banana’ 1997. And Fabio Cannavaro’s 2006 victory was founded on the memory of his muscular arms lifting the World Cup rather than a particularly glimmering season.

During this period Patrice Evra was one of the truly outstanding players in the Premier League, and a fundamental component of Manchester United’s success. He was by no means blemishless – regularly appearing bewildered when faced by the jinking Aaron Lennon and his inexplicably coiffed eyebrow. Yet in the past three years he has declined into mediocrity. Charges forward, less frequent now, are faltering. He often appears distracted, allowing wingers to trick inside him. In numerous games he has failed to offer the complementary piston to Rafael’s marauding on the other flank. A rich return of goals from set pieces last season could not disguise the reality that this was just not the same Patrice Evra.

Perhaps over-worked, over-played, over-tired, playing over 47 games in each of the five seasons from 07/08 to 11/12. Whilst others were rotated, rested, Evra continued to plough his furrow down the left.

Or else just complacent. An assured place in a team, irrespective of performance offers little immediate motivation. Or distracted: a minor incident with a Uruguayan, a shockingly politicised 2010 World Cup campaign with France.

There is no dearth of buccaneering full-backs in the Premier League who are so fundamental to their sides, and Manchester United lack the fragmentary influence they offer. Zabaleta and Baines are the most obvious, but others abound. Last season Danny Rose and Sascha Reither were burning lights in average teams. Luke Shaw needs little introduction, offering a perpetual motion and relentless restiveness. Ben Davies promises richly, with a capacity to drift inside in combination with brutish stamina notable as others tired against both Crystal Palace last weekend and culminating in an artfully knee-ed goal against Arsenal on Saturday evening. These are players who can disrupt, create, craft. United used to have one of the outstanding full backs in world football, and developed a reliance upon his abilities. They now lack his effervescence.

And without this energy, United look sluggish and stagnant. They are in danger of being….left back.