If there is one thing the great Sir Alex knows how to do, it is to rise to the occasion and win trophies when the pressure is mounting. He’s even coined a term for it (‘squeaky bum time’ anyone?). So with that, this is, we have all been made to believe, the time of year where United thrive.

The early confusion and adaptation of tactics as we lost our best player to Madrid has been finely (and finally) tuned, our ridiculous defensive injury woes have slowly heeled and the goals are really pouring in. Our last two league games have seen as satisfactorally beaten our most hated rivals, and completely batter an often challenging Bolton side at the Reebok; the latter without our top scorer. Yet even so, you just felt that facing a side as fresh as Chelsea, especially after the mental and physical battering we had incurred mid-week, would be a tad too much to overcome.

The counter argument of being the best and therefore competing in every major tournament, in this case Europe’s premier competition, was utterly prevalent yesterday.

Where as we all rejoiced when Chelsea were convincingly knocked out by Mourinho’s Inter – voiced early on by the fans with chants of ‘Champions League? You’re having a laugh’ – it’s worth remembering that Chelsea were the ones with the fully fit and fully focussed squad. Due to Tuesday night’s defeat in Munich, and of course that other extra-curricular ‘distraction’: the Carling Cup final in February, we were left with  only one striker facing a team who had conceded only 15 away from home all season; and who in their last game scored 7 against a team fighting for a spot in the top 4. Oh, and just to rub it in, they apparently had SO many choices up front that they could afford the luxury of being able to stick 24-goal Drogba on the bench.

As with other sickening results this season, I cannot be bothered in the slightest to analyse this match in any great depth, as quite simply, I would rather repress it for now and deal with it in time (hopefully when Chelsea drop points at some stage in the next 5 games). Interestingly however, it’s worth mentioning that there can be a key parallel drawn with this seasons match at Stamford Bridge where we unluckily and undeservedly walked away point-less. The away fixture and consequent result In November was all (rather conveniently) overshadowed by controversy and injustice towards United; and today, the result can be just as easily disregarded in the same way.

Drogba – who of course, came on to seal victory – was unquestionably offside; so offside that the FA probably need to spend the rest of the bank holiday weekend re-training their retarded on-field staff for the millionth time on what exactly constitutes as ‘offside’. What was even more unquestionable however was Chelsea’s overall dominance and utter superiority in the first-half that should, you would hope, leave Ferguson spending more time questioning his own tactics and players ability rather than that of the linesman.

At the risk of contradicting myself and sounding like I am in fact analysing, all I will say is that this was one of the tamest United performances of the season. Every time their midfield and/or defence were in possession, we couldn’t touch them; yet when the ball was back with Rio or Vidic, their front two and even Lampard and Cole (who had a formidable afternoon) hounded us until we could do nothing other than surrender possession. Giggs and Scholes were clueless, especially with their passing and delivery, and Berbatov – as everyone presumed – was completely isolated at the front. Neither keeper’ had a great deal to do, proving that possession was kept and squandered in the midfield; and Terry, in my opinion, was completely average due to again how minimally he was made to work. Our back two in contrast, and quite tellingly, had a busy old afternoon.

Our goal was scored by last season’s saviour (this is Kiko’s time of year after all). However unfortunately, although it was perfectly timed only 2 minutes after their illegal 2nd, was nothing other than a constellation as opposed to a dramatic reinstatement of our spirit. Will their be another Kiko/Villa moment this season? I pray so. 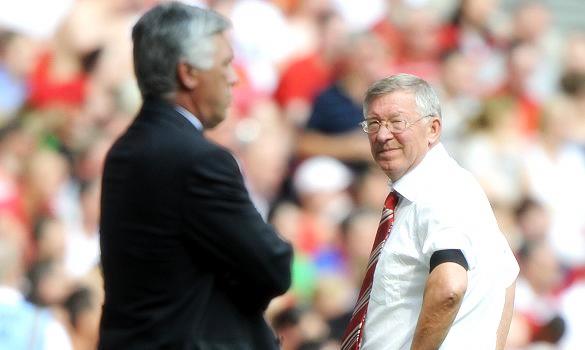 Whether Ancelotti got it spot on – leaving Drogba on the bench and giving Cole the ability to roam free – or Ferguson simply miss-judged the opponents (in hindsight, should Nani have started to give us and the clueless Berbatov far more creative options?), the merits and points are deservedly with the away side. Yes, we will forever be reminded – and remind Chelsea fans – of how we were robbed both times against them this season, and I have no doubt that some will even highlight these two results and the Chelsea goals that harshly won each game as significant moments if we fail to retain the title. But as a more level-headed, less red-tinted United fan, I in no way can condone this; as surely the display, lack of courage and genuine lack of fight instilled within our team would be a more potent reason as to why we would fail in this seasons title challenge.

Also: Poor Refereeing a factor at Old Trafford – At least bad decisions favored neither side