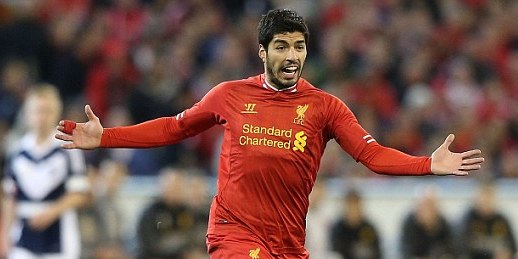 Liverpool maintained their impressive pre-season record so far by beating Melbourne victory 2-0 and in the process earned three victories in a row, without conceding a single goal. 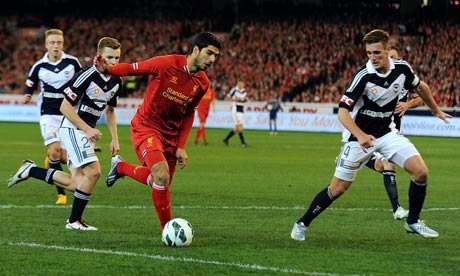 In front of a sell-out crowd of 95,000 at the MCG, Liverpool entertained the Australian fans, as skipper Steven Gerrard found the net in the first half, while new signing Iago Aspas capped off a brilliant night by scoring right at the end of the match, with Luis Suarez being the provider.

Pre-season games are all about match-fitness. From that perspective, Liverpool manager Brendan Rodgers should not have any complaints with how his the team shaped up today, but if there is anything to worry about – is the body language of Suarez, who not only looked unhappy but disinterested as well.

This is something of a worry for the Liverpool manager Brendan Rodgers, whose plans will be more or less centred around the charismatic Uruguayan.

I have said before that Liverpool’s season will be determined by how well the Reds handle the Suarez saga. So far, they have handled well. The club has set a value for the player and is unwilling to sell him to a rival Premier League club. They have rejected two bids from Arsenal and are steadfast in their decision that the player won’t be sold below his valuation, especially to a Premier league club.

However, Rodgers cannot keep an unhappy player in the squad and expect to get the best out of him in the coming season. His heart is set on a move to somewhere else and it seems he no longer wishes to play for Liverpool anymore.

It was reported few weeks ago that Liverpool have given the Uruguayan a deadline to sort out his future. But, I personally feel, more than giving the former Ajax star a deadline, the club must set a target for themselves, as it is evident that the player looks really disinterested.

The Reds would jump on to any negotiation if Real Madrid come calling but the La Liga giants have other targets too and it might happen that they don’t even move for Suarez at all or can lodge a bid very late in the transfer window.

The problem is, if Madrid put up a handsome offer for Suarez in the eleventh hour, say three days before the close of transfer window, how will Liverpool react, as one can say with certainty that an offer from the Galacticos will turn the head of the Uruguayan and might force him to do all sorts of crazy things – like refusing to train, handing transfer request etc.

Tonight’s game might not have any special significance in terms of preparation, but it has clearly pointed out exactly where Liverpool must focus all their energy and decision on till the day it is completely solved. As per the latest reports, Suarez already has asked Liverpool to grant him a permission to speak with Arsenal, as he believes his release clause has been properly activated by the Gunners.