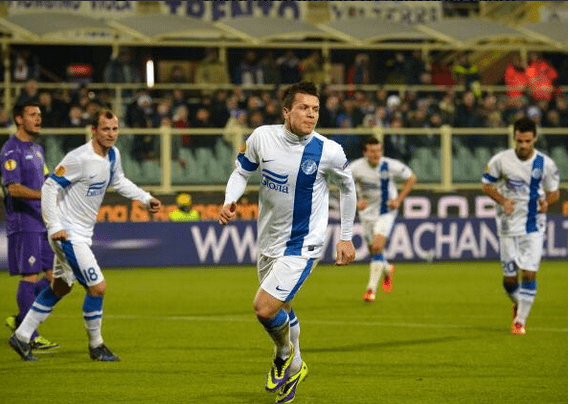 According to latest reports from Ukraine, long term Liverpool target and FC Dnipro winger Yevhen Konoplyanka has snubbed potential interests from Manchester United, preferring to stay at the club in the summer.

The news comes exactly a couple of days after English daily Guardian had reported that United were eyeing a £12m move for the Ukrainian winger. It was stated the Red Devils had sent scout to watch the 24 player last Sunday when Dnipro played Metalurh Donetsk.

Dnipro’s Sporting Director Andrey Stetsenko was well aware of the foreign interests and also admitted that the player could leave the club. “Our scouts are working to find his replacement. Sooner or later Konoplyanka will leave Dnipro.”

Liverpool have been interested in the player since last season but the Anfield side haven’t contacted the Ukrainian club in recent times according to Stetsenko, “After negotiations in the winter Liverpool did not contact us further about Konoplyanka”

In a recent interview Konoplyanka spoke about the interests from the Premier League giants, “Most likely, I would have remained in the “Dnepr”. But let’s not get ahead.”

The player’s agent also threw light on the recent developments a couple of days ago according to sources in Ukraine.

“Almost everyday, I receive more than 5 calls from my colleagues asking about my client. In the case of Manchester United, Konoplyanka understands that he will lose the opportunity to play Champions League.”

The unwillingness from the player clearly suggests that he would want Champions League football but with the Red Devils not featuring in the Champions League next season, it would hard to lure the player who rejected Liverpool last season on similar grounds.