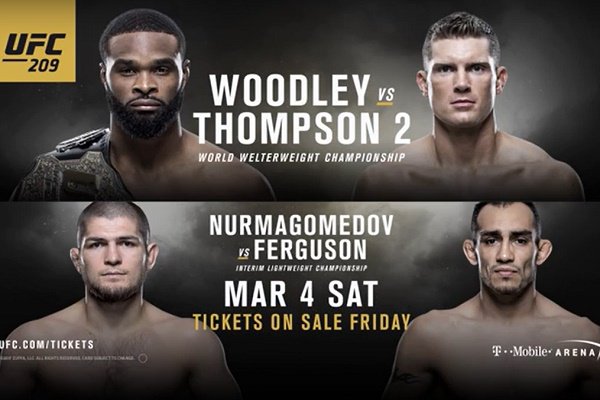 The main card will be as follows:

The event will be headlined by the Welterweight title bout between “The Chosen One” Woodley and “Wonderboy” Thompson, who put up an instant classic at UFC 205. After five pulsating rounds, the judges called it a draw. The champion had several chances to put Thompson away, but the challenger showed some ungodly resistance to stay in the fight. He was in the guillotine choke for almost an entire minute but somehow survived.

This one promises to be another fantastic exchange between the two, and the contrasting styles will be on show once again. The hard-hitting Woodley will not want to be as hesitant as last time, and could look for an early finish. Thompson, on the other hand, hasn’t tasted defeat in the octagon since 2012. The kickboxing specialist will be looking to finally fulfil his talent and promise.

With Conor McGregor currently away from the sport, and an interim UFC Lightweight Champion will be crowned on Saturday.

Khabib vs Ferguson is, in many people’s minds, the standout fight on the card. The former was left fuming at UFC 205, when he saw his Lightweight title shot against Eddie Alvarez given to McGregor. The Irishman made history that night by becoming the first man in the UFC to hold titles in two separate weight categories. Earlier on, Khabib beat Michael Johnson on the preliminary card by submission in the third round.

In Tony Ferguson, Khabib faces a daunting prospect. The unbeaten Russian may be the favourite going in, but Ferguson hasn’t lost in the octagon since 2012. He has won 9 fights on the spin since, and is ranked #2 in the Lightweight category, behind his opponent on Saturday.

Two of the most experienced heavyweights in the UFC take centre stage on Saturday, with both looking to re-enter the title picture. Overeem had his chance against the UFC Heavyweight Champion Stipe Miocic at UFC 203, but lost via a first-round knockout.

The Dutchman has seen his share of ups and downs in his career in the octagon, including a failed drugs test and suspension back in 2012. Interestingly, Mark Hunt has been very vocal in the last year about drug testing, after his loss to Brock Lesnar at UFC 200. Subsequently, the WWE star was tested positive for a banned substance, and the fight was called a no contest.

Overeem and Hunt are two of the hardest hitters in the game, and it will be interesting to see who comes out on top. Hunt’s durability was well on show against Lesnar, as he survived the full three rounds despite a vicious assault by his opponent.

The following matches will be on the preliminary card: