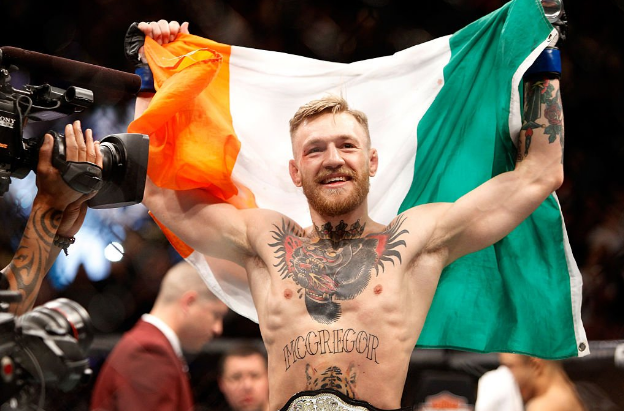 Conor McGregor became the first man in the 23-year history of the Ultimate Fighting Championship (UFC) to hold titles in two separate weight categories in a sold-out Madison Square Garden. The Irishman added the UFC Lightweight Championship to his UFC Featherweight Championship with a second-round knockout of Eddie Alvarez.

McGregor had talked a big game in the pre-fight press conference, and lived up to every word. He took Alvarez down with two left hooks in the first round, but the American survived. In the second though, the southpaw was relentless and didn’t let up, leaving referee John McCarthy with no option but to end the bout.

Tyron Woodley‘s defence of the UFC Welterweight Championship ended in a majority draw against Stephen “Wonderboy” Thompson. After an absolutely hellacious bout that went the distance, two of the three judges scored the fight 47-47. The third judge scored it 48-47 in favour of Woodley.

The champion seemed to have the match won in the fourth round when he unleashed a barrage of punches to leave Thompson’s face a bloody mess. The referee let it continue, and Woodley then successfully locked in a guillotine choke. The challenger though, showed unbelievable resilience to survive and continue. In the end, he wasn’t able to get the finish.

The first title fight of the night saw Joanna Jędrzejczyk successfully defend the UFC Women’s Strawweight Championship by unanimous decision against fellow Pole, Karolina Kowalkiewicz. The champion extended her unbeaten record to 13 with this victory, while Kowalkiewicz was handed her first ever loss.

Jędrzejczyk was dominant throughout, and was awarded the fight by unanimous decision. The only opening Kowalkiewicz got was in the fourth round when she managed to land a big punch, but she was unable to capitalise and finish her compatriot off.

Yoel Romero gave us what was, arguably, the finish of the night with his devastating third-round knockout of Chris Weidman. The middleweight bout ended in the third round when the Cuban landed a knee to Weidman’s head.

In the first fight on the main card, Miesha Tate called time on her 10-year mixed martial career following a loss to Racquel Pennington.