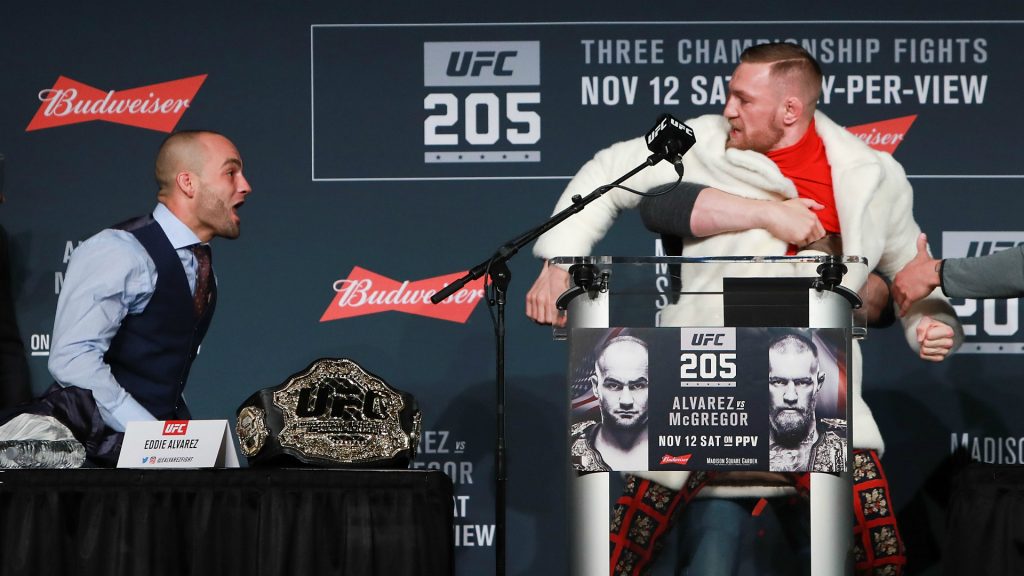 UFC 205: Alvarez vs McGregor is going to be a history-making event. The first mixed martial arts event to ever take place at Madison Square Garden, the pay-per-view will feature three Championship bouts.

As the main headliner, Eddie Alvarez will defend his UFC Lightweight Championship against Conor McGregor. The latter is the reigning UFC Featherweight Champion, and is looking to become the first man to hold UFC titles in two separate weight categories.

The UFC Welterweight Championship will also be on the line as Tyler Woodley defends against Stephen Thompson.

The third and final belt on the line will be the UFC Women’s Strawweight Championship. An all-Polish encounter will see current champion Joanna Jędrzejczyk defend against Karolina Kowalkiewicz.

The other matches on the main card are:

The pre-fight press conference was all McGregor, with the Irishman being at his boisterous and outspoken best. He arrived late in a Gucci mink coat, and Alvarez decided to walk off-stage at that point. The American had left the UFC Lightweight Championship belt on the table though, and McGregor announced his entrance on the dais by taking the belt and putting it on his table instead. Alvarez’s return followed a fiery exchange between the two, and Dana White had to intervene to stop the challenger throwing a chair at the champion.

The loud crowd was behind McGregor throughout, and the fighter’s supremely confident prediction was met with raucous cheers:

I predict I rearrange his face. He’s too easily hit. Through all the talking, through everything else, he can be hit too easily. It’s happened his whole career. When you’re talking about someone with the precision I have, I’m going to hit him and he’s going to fall. […] I think one round. If he can hold out and he can drag it into the trenches, I’ll take my hat off to him. But he’ll never be the same if that’s the case.

McGregor went on to say that he wouldn’t be satisfied by winning just two of the belts in the UFC, but wanted to go on and win every one available. When asked about a possible retirement on the horizon, the 28 year-old said, “I’m only warming up. I’m only warming up. I’ll take all them damn belts over there.”

Alvarez said that he had always been the top dog, despite only making his UFC debut in September 2014…

Here are the in-depth previews for each of the headline bouts:

The most anticipated fight of the night at UFC 205, this one is expected to close out the show. There’s been a lot of things said between the two, but now the time has come to see who can do the real talking in the octagon.

McGregor comes into this one on the back of a 5-round majority decision win over Nate Diaz in a welterweight bout at UFC 202. This came after a second-round loss to the American at UFC 196. The Irishman proved in their second match-up that he can go the distance if required to, despite looking to finish Alvarez early.

He will take inspiration from his performance against Jose Aldo at UFC 194, where he knocked his opponent out in 13 seconds in the first round to win the UFC Featherweight Championship. Alvarez has a style similar to that of Aldo, and McGregor will look to capitalise early on.

The longer the fight goes, the more Alvarez will fancy his chances. The former two-time Bellator Lightweight Champion is on a 3-match winning streak in UFC. His last bout back in July saw him put on a tremendous show against Rafael dos Anjos, whom he beat via technical knockout in the first round to win the UFC Lightweight Championship.

All eyes at the MSG and around the world are going to be on this one, as McGregor looks to make history in a city he says, “the Irish built”.

UFC Welterweight Champion, Tyron Woodley, is one of the fiercest strikers in the game, and 5 of his 6 victories in the UFC have come by knockout. This includes a first round KO to win the belt from Robbie Lawler at UFC 201. “The Chosen One” may not have the widest array of offence, but will go into his bout with Thompson high on confidence.

“The Wonderboy,” on the other hand, has arguably been the most impressive fighter in the division in recent times. He is on a 7-match winning streak, including first round knockouts against experienced campaigners Johny Hendricks and Robert Whittaker at UFC Fight Night: Hendricks vs Thompson and UFC 170 respectively. The sky is the limit for him at the moment, and the next step is to go and become champion at UFC 205.

Jędrzejczyk and Kowalkiewicz are both unbeaten in their careers so far, and something will have to give on Saturday. The two women know each other very well indeed, and the bout could very well be the most enticingly competitive one on the night. They’re both in fantastic condition, and have the stamina to go the distance and keep the intensity intact right through.

Jędrzejczyk is looking close to unstoppable at the moment, and this will be her fourth defence since winning the belt from Carla Esparza at UFC 185 in March 2015. Kowalkiewicz seems like the most worthy competitor at the moment, but each of the 31 year-old’s 3 UFC victories have come by decision in 3-round contests.

Jędrzejczyk looks like the fan favourite at the moment, and seemingly trumps Kowalkiewicz in every department. The two Poles butted heads at the pre-match press conference, and their fight on Saturday is sure to be a feisty encounter.