After 3.3 million votes cast by 256,000 online users (slightly less than last year), the uefa.com Team of the Year 2008 was revealed earlier this week.

As can usually be expected with these things, this starting eleven will please many and disappoint others (especially those whose favorite player was not selected) but this being said, there’s quality oozing all over in this team. I personally prefer the journalist choice of L’Ã‰quipe’s Best 11 Soccer Players of 2008, but “the people have spoken” as they say…

Nevertheless, feel free to give your 2 cents (and fire away your insults) in the comments section.

In total 53 individuals have been selected on the 8 uefa.com users’ Team of the Years. By far the most successful player has been French forward Thierry Henry. He was selected on the first four teams, missed out by a mere 1,000 votes on the Team of 2005 before garnering his 5th selection in the 2006 team. Zinedine Zidane was selected in the first 3 teams, while Pavel Nedved, Alessandro Nesta, Gianluigi Buffon, Carles Puyol, Ronaldinho and Jose Mourinho have also all appeared in 3 selections.

The official website of the award can be found here.

More than 3.3 million votes were cast by about 256,000 users, whose resulting dream team features six members of the Spain side that conquered Europe last summer. Iker Casillas is the goalkeeper, playing behind two international team-mates in right-back Sergio Ramos and centre-back Carles Puyol. The continental champions strongly influence the central sphere of operations, with Xavi Hernandez being the pick in the middle of the park and Cesc Fabregas handed the role of attacking midfielder. Fernando Torres lines up in attack.

The Spanish flavour continues with the deployment of Barcelona’s Lionel Messi alongside Torres. That makes the current Liga leaders the best-represented club, with three players. Together with Real Madrid, Bayern Munich have two representatives thanks to the inclusion of left-back Philipp Lahm — a EURO finalist with Germany — and winger Franck Ribery. English football can point to the nominations of centre-half John Terry and winger Cristiano Ronaldo, both protagonists in the UEFA Champions League final between Chelsea and Manchester United. Overseeing this talented blend is the winning coach from Moscow in May, Manchester United manager Sir Alex Ferguson. Xavi gets the captaincy. 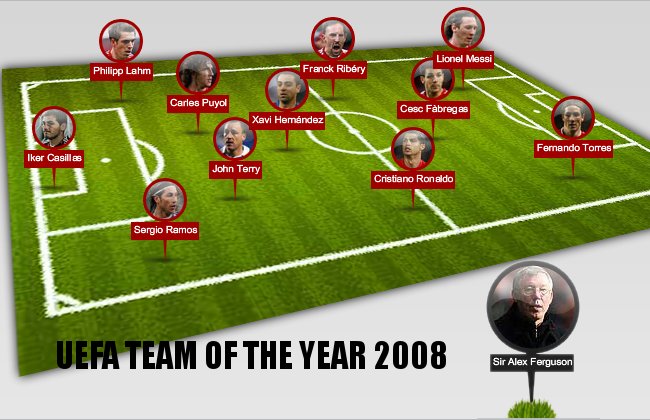 Marco Pantanella is one of the Editors of Soccerlens, and the Author and Editor of the mCalcio blog