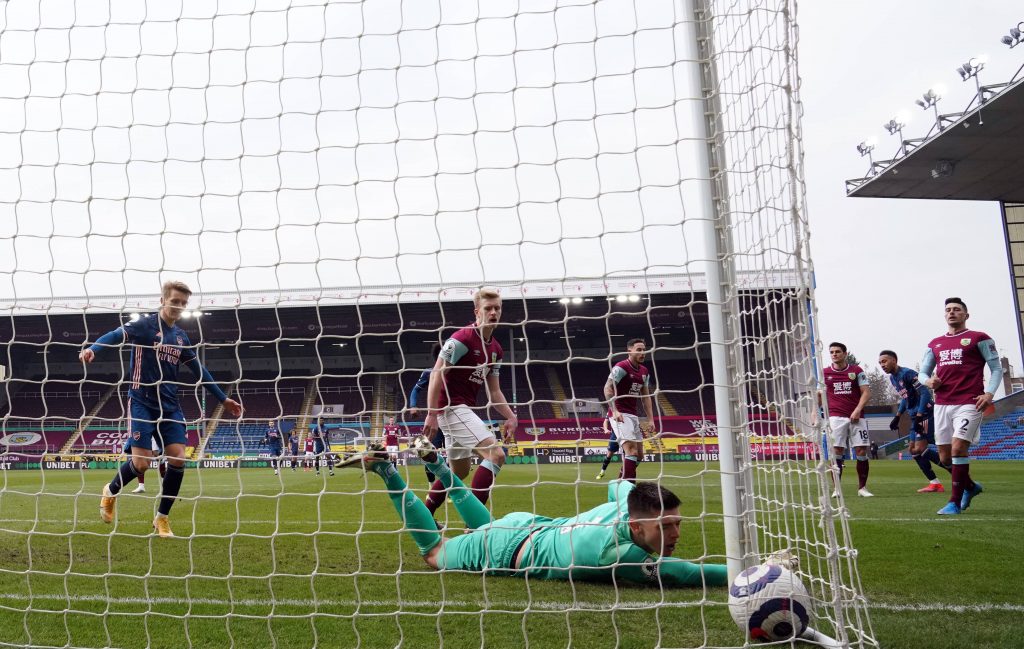 Arsenal were held to a 1-1 draw by Burnley on an eventful afternoon at Turf Moor on Saturday.

Things started in ideal fashion for the Gunners. Willian fed Pierre-Emerick Aubameyang, who slammed home at the near post via the hand of Nick Pope.

It was the former Borussia Dortmund striker’s 15th goal in 29 appearances in all competitions, and fans were quick to react on Twitter.

Pierre Emerick Aubameyang has scored more goals (8) against Burnley than versus any other opponent.

Aubameyang is back. Another Willian assist.

Auba whenever he cuts in on his right… pic.twitter.com/wz8OJAgzQ8

However, Twitter wasn’t so kind towards Pope, who will be disappointed not to have kept it out. The England international has been going through a dip in form recently.

good move by aubameyang but that is a weak shot. pope should've kept that out easily

But it wasn’t long before the hosts were level – and in quite comical fashion. Granit Xhaka’s pass across his own goal hit the hip of striker Chris Wood and bounced into the back of the net.

Most errors leading to goals amongst outfield players in the Premier League since 2016/17:

At least three more than the next player. 😳 pic.twitter.com/Ua2LkTpIHC

Unfortunately for Xhaka that goal pretty much sums up why he's not been able to progress from good player to top player. He's been brilliant for months, and is so important to Arteta, but he just can't seem to cut out these silly errors from his game.

The Swiss midfielder wasn’t the only one coming under fire for the incident. Goalkeeper Bernd Leno was also heavily criticised for his role in the goal.

FFS. What a stupid bloody goal to concede. Dumb by Leno, dumber by Xhaka.

Im all for poppin ball etc but when 3pts are on the line in a competitive fixture, I dont want my keeper passing there in that specific moment – As a team we tried to PLAY AROUND & PLAY THROUGH the opposition (short passes).. creating space to PLAY INTO (medium to long) #MyView

Xhaka called for the ball, Leno obliged and passed to him. Both players are at fault, but Leno was in a better position to see Xhaka had a Burnley player closing him down. Should have hit it up field. #BURARS

While there were no further goals, it was a second-half full of incidents.

Mikel Arteta’s side felt like they should have been awarded a penalty in the second half after Nicolas Pepe’s touch hit the arm of Dutch full-back Erik Pieters. VAR did not intervene, however, and the game continued.

HOW IS THAT NOT A HANDBALL?

That second one looked like he was playing basketball 😂😂😂

If the handball is denied by close proximity it’s a nonsense in my opinion. The arm is out sideways and was not blasted at him.

Both Pepe and Pieters continued to be the centre of attention. The Ivorian fluffed his lines when set up by Kieran Tierney, while the Burnley man was one Leno save away from scoring a sensational 30-yard volley.

Then, the same duo were involved as the North Londoners thought they’d been awarded a penalty.

Pepe’s right-footed volley was deflected onto the crossbar by Pieters, who was penalised for a handball. Referee Andre Marriner pointed to the spot and sent the defender off.

However, replays showed that Pepe’s volley had struck Pieters’ shoulder. VAR stepped in and overturned the decision.

Pieters handball incident, the perfect way VAR should be used! 👏🏽

The handball they just gave Eric Pieters a red card and a penalty for was 100% less of a handball than the one he did commit that should have been a penalty. Terrible decision making that makes fans crazy

Both sides came close to nicking all three points towards the end. Wood had the opportunity to grab his second of the game but was denied by Leno, while Dani Ceballos came within inches of a winner right at the death, slamming against the post after a goalmouth scramble.