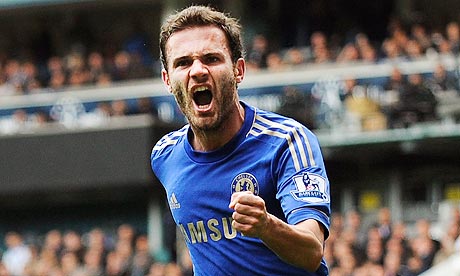 Tottenham Hotspur manager Andres Villas-Boas has recently admitted his side won’t be making an official approach for Chelsea playmaker Juan Mata – citing how the London rival would never consider selling to them.

‘Mata is a great player – player of the year last season, a very important player for Chelsea. But Chelsea wouldn’t sell to Tottenham in any way, as they think we are title contenders. They’re just not going to strengthen another team that, in their opinion, are rivals for the title.’

The 25-year old has only made one appearance in the side’s three Premier League games so far, which manager Jose Mourinho said was down to fatigue. However, many feel the Chelsea boss is planning to axe the Spanish international from the side – which has put a number of clubs around Europe on red alert.

Chelsea have recently signed Willian – a left-sided forward and attacking midfielder who can play in Juan Mata’s position. The side now have more than enough personnel covered for both roles, which makes it even harder for the midfielder to force his way back in the team.

Juan Mata put in a lacklustre performance recently against Aston Villa, and was substituted just after the hour mark. While Mourinho insisted Mata was an important player in his plans, clearly a number of sides think otherwise, and they are keen to test Chelsea’s resolve for him.

The Chelsea manager does have a case to cite fatigue as a reason to keep the 25-year old out of the starting lineup in the early stages, as he’s endured a long season and little of a summer break – after representing Spain in the 2013 Confederations Cup.

With the transfer window soon to be closing in a few days, it looks like Tottenham won’t further pursue the Chelsea midfielder, and will instead move their sights onto Christian Eriksen of Ajax, and Erik Lamela of AS Roma.