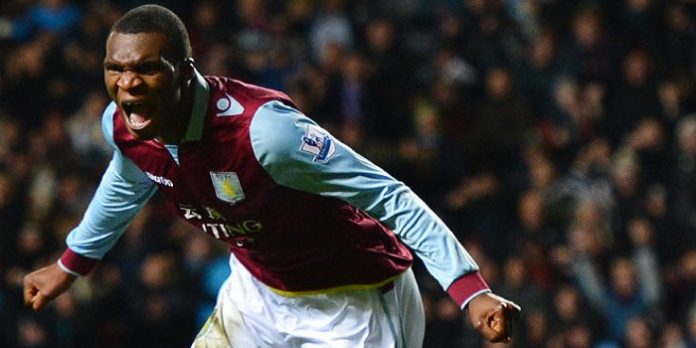 Christian Benteke has left Aston Villa stunned by handing in an official transfer request. The 22 year-old had become a fan favourite since moving from KRC Genk last summer for £7 million, scoring 23 goals in 39 appearances, but has now seemingly decided the time is right to secure a move to a bigger club.

An official statement by Aston Villa suggested that although they were keen to hang on to the prolific Belgian, they would be willing to let him go if their valuation was met:

“In response to reports that Christian Benteke has not travelled to Germany and has made a transfer request, we can confirm that both are accurate.

“For clarity’s sake, however, he had already been given extra time off until July 18 and was reminded that there are three years remaining on his contract, we consider him to be a Villa player and expect that he will be with us for the 2013-14 season.

“Having received his transfer request, we have also informed him that should we receive an offer within an appropriate time frame during pre-season which meets our valuation we would act upon it. But he will remain a Villa player should this not happen.”

Upon hearing this, André Villas-Boas must now be hoping a deal can be concluded to bring Christian Benteke to White Hart Lane, where he continues to build a strong, youthful Tottenham side.

There will no doubt be other suitors for such an exciting prospect, though. Reports emerged yesterday that Jose Mourinho had identified Benteke as his top target, after failing to land other, more illustrious names.

Similarly, Arsene Wenger could consider shelving his plans to bring Gonzalo Higuaín to North London, and instead focus on bringing the 6’3″ inch Belgian, who has reportedly previously expressed a desire to move to Arsenal.

Not only would this move be more in keeping with Wenger’s philosophy of nurturing young, raw talent, but it would also free up money for further additions given the expected difference in wage demands.

Liverpool – who would have a vacant spot and an injection of cash should they sell want-away Luis Suarez – could also contemplate bidding for Benteke, who would be guaranteed regular playing time ahead of next summer’s World Cup.

Indeed, even clubs the stature of Manchester City and Borussia Dortmund could be put to alert by the availability of such a promising striker, given their own need to strengthen their attack.

Despite this, it is Tottenham that require a player of Benteke’s stature the most, and must therefore be considered the front-runners for his signature. With AVB unconvinced over his current strikers – Jermain Defoe and Emmanuel Adebayor – Spurs have been busy identifying realistic targets that could improve the club’s fortunes next season.

Players such as Roberto Soldado, Alvaro Negredo, David Villa, Romelu Lukaku, Leandro Damião and Jackson Martinez have all been reported to be on Tottenham’s radar along with Christian Benteke at some point during the season.

However, this list must now surely be re-evaluated with David Villa moving to Atletico Madrid and Roberto Soldado, Romelu Lukaku and Jackson Martinez being declared as not for sale. Additionally, it is looking increasingly likely that both Negredo and Damião will be playing in sky blue next season, at Manchester City and Napoli respectively.

Consequently, Benteke represents Tottenham’s best chance of securing a top class striker in time for next season. Young, quick, powerful and efficient, Benteke embodies the Spurs that AVB is trying to create at White Hart Lane.

With Paulinho’s earlier arrival possibly paving the way for a switch to 4-3-3, Tottenham need a focal point upfront who is equally capable of holding the ball up and running in behind the opposition’s defence. In Benteke, they would have a player already capable of providing that function, as well as the promise of steady improvement.

As a result, Tottenham must act quickly and do whatever it takes to acquire Benteke’s signature. After breaking their transfer record last week, Daniel Levy and Joe Lewis must sanction a deal that would break it again.

Tottenham may have missed out on a number of attacking targets, but if they can secure the signing of Aston Villa’s want-away striker, they may just have signed the best one.