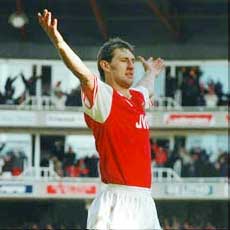 Arsenal secured their 18th win of the 2018-19 English Premier League campaign with a 2-0 win over Manchester United on Sunday at their home ground and are now firmly in the race to finish in top-four, with just a point between them and third-placed Tottenham Hotspur after 30 games.

The Gunners took their chances, with goals from goals from Granit Xhaka and Pierre-Emerick Aubameyang handing United interim boss Ole Gunnar Solskjaer his first league defeat since taking over from Jose Mourinho.

Some Arsenal legends were at the Emirates as usual for the cracker, and they surely would have been proud of the side’s performance.

Former skipper Tony Adams was a happy man post-game, and he couldn’t hide his joy from reporters as he walked through the press conference room, telling them “Come on you Gunners”, as reported by football.london’s Arsenal correspondent.

"Come on you Gunners" he says, shaking his fist towards us all.

Arsenal have no excuse whatsoever to miss out on next season’s Champions League given their easier run of fixtures compared to other challengers.

The Gunners’ next eight games come against teams standing below them in the league table, and despite five of them being away from home, securing the needed results shouldn’t be herculean for Unai Emery’s men given what is at stake.