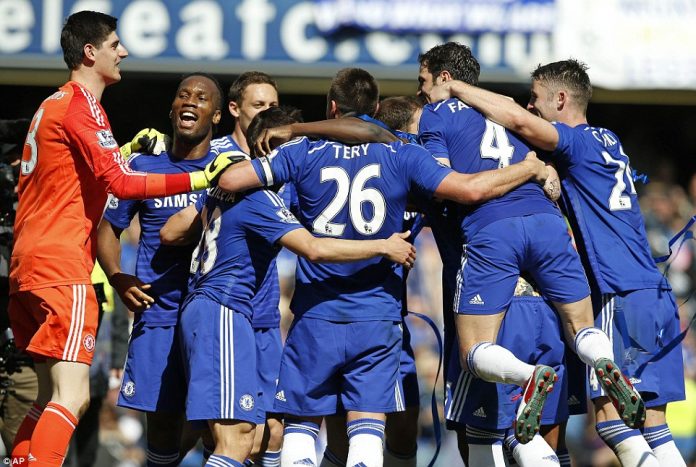 So, finally, with three weeks to go in the season, the title race is officially done and dusted. Even though we’ve all known it for quite a while now, it is only today that Chelsea were mathematically confirmed champions. An unspectacular but effective 1-0 win at Stamford Bridge over Crystal Palace sealed the deal, with Eden Hazard, quite fittingly, scoring the winner.

The Blues ended a five-year wait for supremacy on English soil, and did it style, delivering close to the perfect season. Here are three reasons why Chelsea have deservingly been crowned the best team in the land:

1) The early bird gets the worm

The foundations for this league victory was laid back in the summer transfer window of last year. Jose Mourinho entered the market knowing exactly what he wanted, and acted quickly. Cesc Fabregas and Diego Costa were brought in to fill two obvious voids from last season, while Didier Drogba was signed for his experience. Also, the decision was taken to call back Thibaut Courtois from his loan period at Atletico Madrid and have him replace Petr Cech in goal. This business was done well before the World Cup in Brazil, and as a result, the group of players got a lot of time to gel with each other ahead of the new season.

And, despite this big money spent, Chelsea recorded a net profit, selling the likes of David Luiz, Kevin De Bruyne and Romelu Lukaku at much higher prices than what they were bought at. In the process, they have become the first team to be Champions and record a positive return in over a decade.

Quite incredibly, Chelsea have been on top of the league since day 1 of the Premier League. Their 3-1 win on the opening day of the season away at Burnley saw them in occupy 1st place on goal difference, and they have never looked back since. The win against Palace has put them 13 points clear at the top, even though Arsenal can win their two games in hand and bring that deficit down to 10. But it’s a fact that no other team has come even close to troubling the Blues in their quest for the title. Manchester City challenged early on, put faded since the new year, while Man United and Arsenal were cut far apart right from the start. With a born-winner in Jose Mourinho at the helm, Chelsea paced their campaign perfectly well and consistently delivered throughout. They have only lost 2 games all season and are well on course to become the first team to hit the 90-point mark in 6 years.

3) The ‘boring’ obsession with winning

Chelsea started the season like a house on fire and remained unbeaten until December. They played some incredible football as Cesc Fabregas and Diego Costa fitted in right from the get go, while Eden Hazard stepped it up another level from last year. For once, a Mourinho-side was entertaining to watch. They were well ahead of all their other competitors as a result of this fantastic start to the campaign.

In the calendar year 2015 though, their performances have dropped. Despite this, they have continued the winning habit, digging out the right results while not being at their best. Since January, they have only won one game by a margin of more than one goal, but have not lost a single match. Usually, when a team goes through a bad patch, a lot of points are dropped. But with Chelsea, this was hardly the case. They were branded ‘boring’ by some due to their pragmatic approach, but Mourinho’s smug smile after every win gave the impression of someone who understood something nobody else did. They managed to get the job done, tactically outsmarting their opposition while not being able to technically.

Despite this dream season, Mourinho will know that retaining the title will be a much more difficult task. City, United and Arsenal are all expected to come back stronger and even though it has been such an ideal year for the Blues, they will look to improve further going into the 2015-16 campaign.