Welcome back to the top of the Most Valuable Offensive Players (MVOP) ranking, Eden Hazard! The Chelsea winger was a wreck last season. Now, he is the top offensive performer in the Premier League. Hazard earned his side a grand total of 3.11 points last season. He has more than tripled that amount this season with 68% of the season yet to go. Hazard has earned 35% of Chelsea’s league leading 28 points thus far. So yes, he definitely deserves to be the MVOP…at least, for now.

Of course, Hazard hasn’t pushed Chelsea to the top all by himself. His teammate, Diego Costa, is in 2nd place in the rankings. The Spanish striker had earned his side a total of 11.43 points last season. He is well on his way to surpassing that total this season. 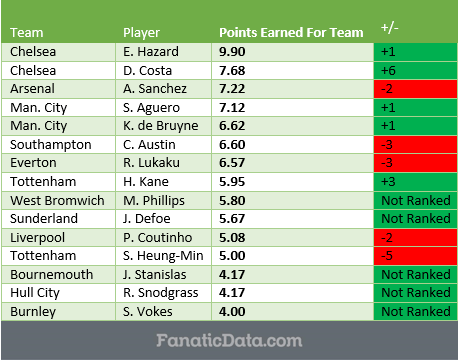 While Eden Hazard and Diego Costa are set to be this season’s Batman and Robin, there is plenty of action happening beneath them in the rankings as well. Previous MVOP leader, Alexis Sánchez, held steady in 3rd place, while a lot of players that were previously unranked made their way into the top 15 based on impressive individual efforts.

West Bromwich Albion’s Matt Phillips and Sunderland’s Jermain Defoe each single-handedly scored the necessary goal needed to earn their side 3 points this past matchday. Bournemouth’s Junior Stanislas, Hull City’s Robert Snodgrass and Burnley’s Sam Vokes are also fresh arrivals to the rankings, although, we have seen the latter two in the rankings before.

Utilizing the most commonly used formation in the Premier League, 4-2-3-1, we determined the most valuable starting squad through Matchday 12 (excluding goalies). 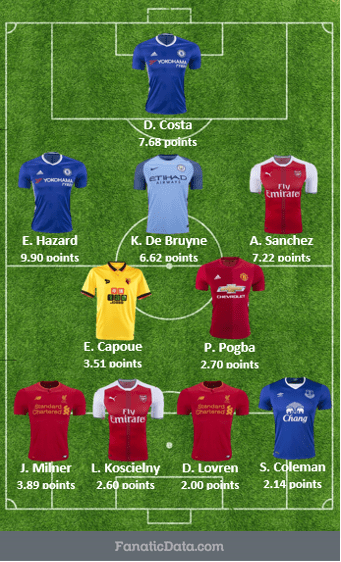 None of the players in the starting 11 should come as a serious shock to EPL fans. The only player that you wouldn’t normally expect to see here is Étienne Capoue. The Watford midfielder had 1 goal in his previous 3 seasons in the Premier League, combined. Already scoring 5 times that amount this season has caused Capoue to wander into unchartered territory, in terms of offensive recognition.

While Paul Pogba hasn’t quite lived up to his record-breaking transfer fee thus far, he has at least made it to the starting 11 for the first time this season.

See the latest rankings and starting squad after Matchday 14.