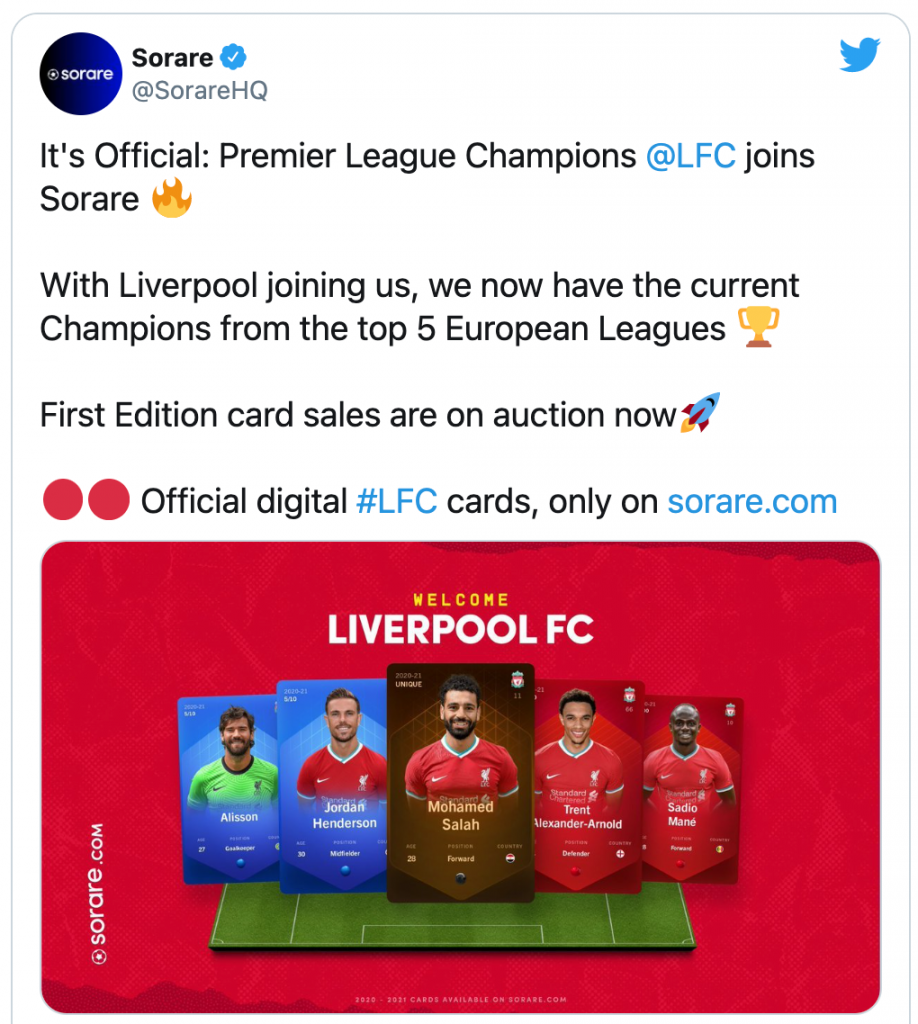 I guarantee that by the end of this year, everyone will have heard of NFTs. Cards on the table, I had no clue what an NFT was until two months ago, and now rarely a day goes by without seeing a reference to them.

Over the last two weeks, NFTs have started to be talked about by rock bands, art galleries and even Disney. So, what are they and how could they play a part in the future of football?

Non-fungible tokens (NFT) are digital assets. They may not sound appealing, but they soon could be one of the most important transactional instruments used by us all.

They are used to create and authenticate physical and virtual items such as sports memorabilia, artwork and music. Simple, right?

Well, not quite. I’m not an expert on the in’s and out’s of NFT’s (but these guys are) and can explain it far better than I can. But since you ask, here’s a five-second explanation of what they are.

A Non-Fungible Token is essentially a unique digital asset, which uses blockchain technology to verify its authenticity. There, simple. But who is talking about them, and why?

NFTs are unique – no two NFTs are identical, even if they represent the same item. A digital record is kept on a blockchain which includes information that verifies the source and history of the NFT.

Let’s take the age-old problem of ticket touting. It’s June, and England have made it through to the European Championship semi-finals. Fans are allowed back into Wembley but, as usual, the touts have taken all the tickets and are asking £’000 for them.

Some are genuine – others are almost perfect looking forgeries. The touts/scammers win, the genuine fans lose. A familiar story we have encountered for years.

The solution is NFT. Tickets can be issued as part of a blockchain. The blockchain will include full details of who the ticket was originally allocated to, what price they paid and whether it has been resold to someone else.

Each one is unique and easily verifiable. If a ticket ends up in the hands of a tout, their details will be recorded and there will be a chain of transactions held within the blockchain.

If the tickets are held digitally, they can only be transferred from one holder to another through the blockchain application.

Each NFT, or in this case, ticket, contains distinguishing information that makes it both distinct from any other NFT or ticket, and easily verifiable. This makes the creation and circulation of forged tickets pointless because each item can be traced back to the original issuer.

The major growth in NFTs has been in collectables, including artworks and sports memorabilia. By creating a single, global database of all art objects, the risk of buying a forgery or a stolen work decreases significantly because every piece is tagged.

The clever part of any blockchain application, such as NFTs, is that it can only be updated by consensus. That is, everyone who is within the blockchain system must agree on additions and changes to the chain itself — something which becomes significant when you factor in that nothing entered into the blockchain can be removed.

NFTs cannot be destroyed, removed or copied. One other interesting element, which has been ceased upon by the band Kings of Leon in releasing their new album, is that ownership of NFTs belongs to the purchaser, not the licensor. So, if you buy their new album via an NFT, you own the music, not just the licence from the record company to listen to it.

If you think it is a fad, then think again. Nearly $200m has been spent on NFTs in the last three years, and their popularity is revolutionising the collectables space – The NBA has created an application called Top Shots for collectable ‘moments’ that is like eBay on steroids, where buyers digitally queue to buy packs of video clips from NBA games featuring a particular player and then can trade them on a blockchain market place.

It is only a matter of time before the Premier League wise up to the massive opportunity that NFTs offer. Whilst the ticketing concept is a step in the right direction for fans, the EPL will be eying the NBA model of how to monetise their teams, and the teams their players. Liverpool have already jumped on board, partnering with Sorare in January to allow fans to purchase NFTs.

The French company has already put partnerships in place with PSG, Juventus, Porto, Real Madrid and Bayern Munich for their fantasy football game where player’s performances impact the value of the NFTs.

NFT’s may not be a new concept, but they are making the jump from a crypto-application to one that can deliver some real benefits to traditional sporting models and challenges.

It will take some clever marketing to get people comfortable with the idea, but the possibilities are significant for clubs, governing bodies and fans. Let’s hope they are used “for the good of the game” and not just an excuse to extract another pound of flesh from fans.

This article is written by Stuart Noel, was originally published here on theballisround.co.uk and is reprinted with permission.