The Incredible Rise Of Luis Nani

It was the summer of 2007. Rumours were rife about the Sporting Lisbon winger. The deal was then sealed. In a transfer worth £30m, including the switch of Anderson from Porto, Luis Nani joined Manchester United and donned the # 17 jersey vacated by Henrik Larsson the previous March. Nani had been hailed as the next Ronaldo and a whiz kid and he showed this sporadically during his maiden season with the English club. Unfortunately as expectations the next season soared, his form plummeted. However, since January 2010, the man from Cape Verde has gone from strength to strength as he has transformed himself from a winger with the odd piece of brilliance into a man who can decide matches.

After sealing his dream move, he wasted no time in making a wonderful first impression on the Old Trafford faithful by scoring a 30-yard screamer to kick-start a United season which would see them complete a double of the Premier League title and Champions League glory. Scoring more belters against Middlesborough, an emphatic finish against rivals Liverpool and a man of the match display against Arsenal in the FA Cup launched him not only into the eye of all of the Premier League but also the world. Finishing the season by showing his mental strength by netting a crucial penalty in a shoot-out in the Champions League and then his dancing skills celebrating afterwards, it looked like the beginning of a beautiful relationship

However, the next season came and went for Nani and he didn’t leave a great impression. In hindsight, he went backwards in more than any other direction and it showed as he was left out of the first team more times than the previous season. The final straw seemed to be when Manchester United faced Tottenham in a title-defining game at Old Trafford. Finding themselves in a two-goal deficit, the least effective and most frustrating player on the pitch was immediately sacrificed at half-time and on came Carlos Tevez. Constantly being dispossessed and running into dead-ends in the first half, Nani watched as the second half unfurled into an example of how to be purposeful and lethal. Rooney, Ronaldo, Tevez and even Berbatov contributed to the demolition of Spurs as United ran out 5-2 winners. United eventually saw out the remaining games and clinched a record-equalling 18th league title.

A false dawn ensued the following season, after a bright start in the Community Shield where Nani scored a trademark 30-yard screamer. In the very same game, he broke his collarbone and the inconsistency which blighted previous seasons had returned. Things went from bad to worse as newspapers reported of a falling out with manager, Sir Alex Ferguson and rumours were circulating of an impending exit out of Manchester. In a whirlwind turn of events and after some sensible talks with the boss, Nani knuckled down, worked hard and found himself back in the first team. Then an unforgettable and pivotal day in his career arrived.

Arsenal vs. Manchester United at the Emirates Stadium on 31st January 2010. 33 minutes into the game, Nani produced a moment of brilliance, a la his former team-mate Ronaldo, by mesmerising the Arsenal defence and scoring a chip from the tightest of angles. Adding an assist to that for the then free-scoring Wayne Rooney by sprinting the length of the pitch, a star had been reborn. For the remainder of that season, he went on to terrorise defences at home in England and abroad in the Champions League. Tearing Bayern Munich apart at Old Trafford (losing on away goals) and proving skill and grace to chip Heurelho Gomes to keep their smouldering title hopes burning, Nani had proved in the latter half of the 2009/10 season that he had finally matured as a footballer. 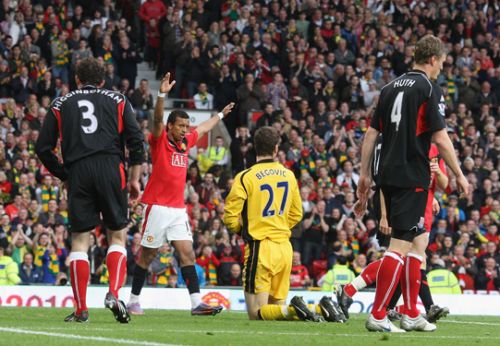 After missing the 2010 World Cup with Portugal because of injury, the Portuguese winger sought to take out his anger on the rest of the Premier League. The statistics speak for themselves as 5 goals and 9 assists in all competitions this season tell their own story. However when you look past the stats, see the quality of his goals and assists such as his goals against West Ham, Bolton and Bursaspor coupled with the assists like Berbatov for his Liverpool stunner and Vidic for the opener against Tottenham, then you know Manchester United have got a real talent on their hands.

Luis Nani is a culmination of pace, tricks, innovation and with an extraordinary ability to produce a moment of genius out of the blue. Just the kind of player United need to click into form after an indifferent start to this season.