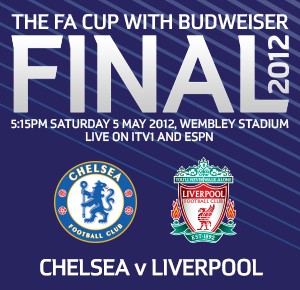 Today’s FA cup final will provide four big names with the chance to turn a poor season around by bringing success to their respective clubs. Chelsea’s two attackers have had a less that average season, Torres has managed 6 goals in 30 Premier League appearances, whilst Drogba has scored just 5 in 23.Compared to previous years, this is an extremely poor success rate. Both Players average just below 300 minutes per goal. Suarez and Carroll have been just as poor considering their season tallies. Carroll has only manager 4 goals in 33 Premier League appearances; Suarez has scored 11 in 29. Carroll averages 471 per goal whilst Suarez averages 216.

For Chelsea, Didier Drogba spent a few months on the fringes of the team but he has been instrumental in their recent revival, and their former Reds star Fernando Torres is back among the goals after looking like he would never score again.

Liverpool’s £35m striker Andy Carroll has also faced a lot of stick for his failure to find the net regularly, while his team-mate Luis Suarez has had other issues after he was banned for eight matches for racially abusing Manchester United defender Patrice Evra in October.

At times, it has been a campaign that they will all have wanted to forget, but I think one of them will score the goal that will win the game, and the cup.

Drogba has the greatest past experience at Wembley. He has played seven times at the stadium – in three FA Cup semi-finals, two FA Cup finals, and a league cup – and he has seven goals. Against Barcelona we saw his importance to Chelsea. When Chelsea were struggling for possession, he provided an outlet for his team mates, his strength and finishing ability allows him to compete against any defender in the World.

His ability to defend is also very impressive. He often contributes when the opposition team have set pieces. He comes back for every free-kick and corner. This was also seen against Barcelona, as he won the ball deep inside his own half a number of times. Everybody knows the quality that the Spaniard possesses. But under the pressure of a £50 million transfer cost, he has struggled to prove himself the Chelsea fans this season.

His recent form has certainly improved. Having scored a late equaliser at the Nou Camp against Barca to secure Chelsea’s place in the Champions League final, under a week later he netted an impressive hat-trick against struggling QPR.

It’s highly likely that Torres won’t being in the starting line-up for Di Matteo’s side. However, circumstances would suggest the Chelsea front-man will have a big part to play at some point, especially considering the match is against his previous team. Carroll, who moved to Anfield on the same day Torres left for Stamford Bridge in January 2011, is another striker who is struggling to score goals.

He too moved for a large transfer fee (£30 million) and has failed to live up to this costly price. However, he has scored important goals for the club, for example, his late winner against Everton in the FA Cup semi-final. Without Carroll, Liverpool may not have reached this stage of the competition.

It would be great for the ex-Newcastle man if he could provide the goals in today’s final. It would certainly help his case with the clubs fans and would be a huge confidence boost going into next season. Controversy has surrounded Suarez since he racially abused Evra in October, and then refused to shake his hand when he returned from his ban in February. So it is much more positive that we are back to talking about his actual performances again. However, I still think Suarez is still from the top of his game right now.

In his last match, Suarez scored a stunning hat-trick against high-flyers Norwich. Until this game, he had also been struggling to hit the back of the net.

Suarez is a brilliant footballer; he has proven this at both club and international level. He brings other players into the game, he leads the line well, and runs in behind the defence. He will be a very dangerous in the final, the Chelsea defenders will have to be very wary of the threat the Uruguayan poses. The Final is going to am extremely close match, however, I believe Chelsea will emerge victorious. I’ve been a huge fan of Di Matteo since he has taken control of the previously downtrodden side. His achievements have been remarkable having turned a very poor season into something potentially amazing for the London club.

Obviously Chelsea do have something bigger to look forward to after the FA Cup final, namely the Champions League final in Munich on 19 May. But I can’t see them disregarding this competition because of it.

However, for Liverpool, this is the climax to their season and they will be desperate to stop people talking about their poor league form. They have had an awful year as far as I’m concerned and they’ve been very lucky to have even 1 trophy to show for it.