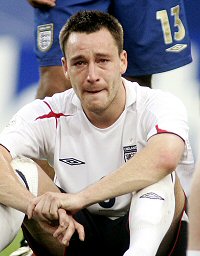 England versus Switzerland. ITV’s typical attempts to wrench a piece of excitement from a fixture which promised as little entertainment as one could ever expect from a competitive international fixture reflected the weariness out on the pitch. Suddenly, Andy Townsend – that charismatic master of the banal – could muster little more than “You know what, Clive, this is actually quite an important game for England, tonight!”. You got the sense that even he would have been more than happy to wrap the season up there and then.

But just for a moment, things became quite interesting. A morose Wembley crowd looked on as two preventable goals gave the visiting side a shock 2-0 lead.England had only managed a goalless draw at home to the mighty Montenegro who, all of a sudden, looked set to steal a march on them for first place in the group. However, a Frank Lampard penalty and a sweet finish from Ashley Young brought the score back to 2-2 and, later on, Montenegro failed to beat Bulgaria at home. All was well.

The trouble is that, but for the brief flourish either side of half-time, England were, for the most part, totally outpassed on their own turf by a mediocre Swiss team. Young’s goal was the result of a fantastic move, instigated down the left by the energetic Leighton Baines (on in place of the injured Ashley Cole); yet after that, with the score level, Switzerland began moving the ball around England’s shapeless midfield effortlessly. The transitions from out of the defence and through midfield were crisp, simple and well-worked; the movement of the (mostly very young) players was simple but effective against and England side who admittedly looked as though they’d rather have been somewhere else.

That the English league season is far too long, that a Winter break would be of enormous benefit to the national team, and that the players are unwilling to respond to the call of their country with the same verve and zeal inspired by their bonuses at club level, are all genuine points worthy of separate debates. However, an issue which the mainstream media, critics, and even average fans don’t seem to want to address is one of tactics.

Although England missed Wayne Rooney’s guile behind the striker last week, what was most in evidence was how pitifully England moved the ball about. As has been said for decades, England are able to compete at the higher levels of the international game because they produce exceptional athletes – players who can outrun, outjump and (sometimes) outshoot most teams in world football. What’s not been said is that English teams tend to have other talents which, when combined with their physical attributes, make them ideal for the implementation of counter-attacking football.

‘Counter-attacking’ has become a dirty term, synonymous with ‘defending’, or even ‘parking the bus’, in English football culture. Whilst the odd sweeping counter-attack, like those of Arsenal in the days of Henry and Pires for example, will be lauded for its ruthlessness and speed, to actually base one’s tactical system on the idea that the best time to attack one’s opponent is when they have the initiative is an idea as repugnant as it is alien in English football culture.

The English have been attacking, so an amateur historian might argue, since the fourteenth century. If we assume that the patriotism exhibited at football stadiums is the same as any other manifestation of national pride, it’s easy to understand why an English supporter might expect his team to adopt a progressive attitude on the pitch. The problem is that England is one of those countries whose international prestige with regards to history, politics and culture is not reflected by their quality of football. The nation out of whose industrial revolution arose the globalisation of a game which it invented itself just can’t make footballers the same way as its best competitors abroad. The English are quietly aware that a team’s style of play is a political and cultural statement.

Yet, if we’re to use history as a guide, it appears almost absurd that one of the defining characteristics of the spirit which built England into the kind of country which should be producing world-class football teams is entirely absent from its football culture: pragmatism. For England, whilst not producing an astounding volume of technically outstanding players in the volume of Spain or Argentina, does produce the kind of quick, strong, efficient player suited to a more ‘conservative’ style of football.

Somewhere along the line, a strange kind of romanticism has infected the English game. In itself, it’d be worthy of an entire separate article. But the fact of the matter is, the English are impervious to any suggestion that their style should adapt to circumstances. Few England fans will ever admit, for example, that their best players are defenders. Whilst players like Steven Gerrard, Frank Lampard and Wayne Rooney have been worshipped into football history by Sky Sports fantasists, they do not and never did compare with the very best elsewhere. Not even Rooney.

On the other hand, Rio Ferdinand, John Terry and Ashley Cole are and have been among the very finest in the world in their respective positions. The truth – alarming though it may be for English purists – is that the English produce a heck of a lot of world-class defenders. They also produce the sorts of players who, rather than organising a game by dominating possession a la Spain, are ideally suited to exploiting space. In recent years, we’ve seen the emergence of Aaron Lennon, Theo Walcott, Ashley Young and others who have had, and still have, the potential to be, if not the world’s best, then among the better players of that pacey mould.

Indeed, one might draw comparisons with Germany in how English players, whilst not necessarily blessed with the same degree of skill as, say, their Latin American counterparts, can more than make up for this deficiency with their superior physical attributes if they are marshalled correctly. For England, it’s almost comical that a man of Fabio Capello’s background has tried to woo his public with bizarre attempts to mould players who are much too talented into a backward ‘English way’ rather than make the most of his resources as Jobi Loew has over the years.

It sounds like heresy, but if England are to attack, they must begin to defend. Naturally, there are problems with this idea. Chiefly, that whilst individually, England’s defenders are arguably the finest in world football, collectively they do not function as well as they might. A particularly strange tendency which has plagued England sides for years is the inappropriate retreat towards their own penalty area once they have taken the lead. It happened in 2002 against Brazil, and again with Portugal in 2004; it has happened more sporadically since, notably in games against weaker opponents, such as Slovenia in South Africa last year.

Another argument might be that England aren’t clinical enough at the other end to make their efficiency at the back count; in recent years, Michael Owen should have had more oportunities, but he now looks a yard short of pace; Darren Bent is finally making Premiership waves, but he’s not a world-class finisher; Jermain Defoe, for all his talent, doesn’t seem able to hold down a spot at Tottenham; Peter Crouch is more a foil than a leading striker; Andy Carroll, for all his ability, probably needs more technical ability to thrive at the highest level.

Still, Capello should have been the man to educate England. Capello should know (in fact, he most probably does know) that England should be playing the way he would like his teams to play. It should have been Capello who brought the rigour and discipline which England so badly need, Capello who brought the tactical nous to end all those years of chasing after the ball and hoofing it forward, Capello the man to finally admit publicly that it’s more important for a Ledley King to reach his potential than a Michael Carrick. But it wasn’t to be.

Capello adapted to England. England did not adapt to Capello. With his arrival, a strange shroud of quiet pessimism surrounded the national side as it became apparent that the Italian maestro would not be instigating the radical changes England fans had hoped for.

Instead, the wily Italian may as well quote Mike Bassett: “England will be playing Four. Four. Fucking. Two.”.