On Monday, The Times published a list of ‘Football’s 50 rising stars’. Tucked away in the rundown was this:

Moldova’s finest, the 16-year-old attacker has been strongly linked with a move to Arsenal, work permit permitting. And he’s been linked with plenty of other top clubs as well.

This sounded vaguely familiar. Sure enough, Bugduv was mentioned in an article in the January 2009 issue of When Saturday Comes magazine. A piece by Mark Gilbey on the effects of the Transdniestria separatist movement on the Moldovan football scene concludes:

Amid nationalist strife in Moldovan football there is one bright spot on the horizon, in 16-year-old midfield prodigy Masal Bugduv, whom many predict will soon be playing his football in a major European league. Best of all, he has no connection to any breakaway regions.

The Offside linked to the Times‘ list in their Daily Dose. Underneath was a comment by a reader called makki, who said that there was a mistake in the Times‘ feature:

Such player doesnt exist, it is fake

The squad list in the Wikipedia entry for Olimpia certainly shows no such player: 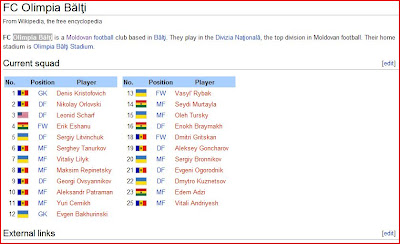 So, to Google, which threw up a blog comment by someone called gheno, dated August 22nd 2008, seemingly a reprinting of a wire story:

TIROL, MOLDOVA (AP) THE player described as the finest young player to come out of Eastern European football since Gheorge Hagi is good enough to go straight in to the Arsenal first team, according to his agent.
Massi Bugduv, the 16-year-old hotshot of Moldovan football has been linked with a host of top clubs around Europe for most of the summer.
Bugduv was left out of his country’s friendly with Lithuania this week because of his complicated transfer negotiations that have seen him based in London since Monday with conflicting news reports having him signing for Arsenal, Chelsea, Zenit St Petersburg, and bizarrely, a move to Reading that involved a loan stint in Ireland in order to secure a work permit.
Last night in London, his agent Sergei Yulikov said that he is sure that the demands of the Premiership will not phase his protege.
“I have no doubt that he has the ability of Fabregas and Nasri, but he needs a stage to perform and prove this. He can be as strong as Obi Mikel of Chelsea, but remember that he is still just a 16 year old boy.
“I cannot talk about the talks with Arsenal, but Masal is happy that he is even being linked with this great football club.
“It plays football the beautiful way, always moving, always passing, always running. It is like the football he played as a child, which is not too long ago, so he cannot believe that this type of football can be played at the top level in Europe,” he said.
Mr Yulikov was seen leaving Highbury House yesterday, the offices of Arsenal near the Emirates Stadium where twenty four hours previously, the club revealed Man Utd player Mikhael Silvestre as their latest summer signing.
Masal Bugduv has been described as one of the most exciting young footballers to come out of Moldocan football.
Born on April 14, 1992, he shot to fame playing for his native FC Olimpia B?l?i for whom he scored a hattrick on his competitive debut in an Adzi Cup match in December 2007.
Bagduv became the youngest player capped at that level by his country and he went on to make his senior international debut aged just 16 years and 44 days when he came on for the national team in their 2-2 draw with Armenia in a friendly international in Tiraspol on May 28.
Trailing 2-1 with just ten minutes left, Moldova seemed set to lose until Bagduv lost his marker on the left wing, shimmied inside two defenders and fired in a shot that could only be parried by Armenian keeper Racif into the path of onrushing Igor Bugaev who equalised. (AP)

Arsenal interested in a 16-year-old wunderkind no-one else has heard of? Sounds plausible. And what an impressive international debut!

Oddly, however, the Wikipedia entry for the Moldovan national team fails to list him. An oversight, surely. Though if that’s the case, it’s an oversight also made by the Moldovan FA. Their report on the match doesn’t even mention Bugduv.

Below the AP story was another comment, left four days later, this time by one Tommy Kelly. Yet again, the AP were on the case:

BUDGUV MOVE TO ARSENAL HELD UP BY RED TAPE

PARIS (AP) Top-rated Moldovan teenager Masal Bugduv has said that diplomatic issues are holding up his drawn out transfer to Arsenal as the clock ticks down to the end of the transfer window.
THE player described as the finest young player to come out of Eastern European football since Gheorge Hagi has given his first full interview which will appear in this week’s Stars of Tomorrow feature in L’Equipe.
Speaking through an interpreter, the 16-year-old said that his move has been held up by the Foreign Office and concerns regarding his international clearance.
“For many month I have dreamt of coming to play for an English football club and the interest has been shown from Arsenal…

And so it continues.

BENITEZ TO STEAL WONDERKID BUGDUV FROM UNDER ARSENAL’S NOSE

The player described as the finest young player to come out of Eastern European football since Gheorge Hagi has been on the radar of the top European clubs all summer, although his preferred club of choice was Arsenal.

However, following Liverpool’s flirtation with elimination from the Champions League, Rafa Benitez has instructed the club to snap up the Moldovan hotshot who made his international debut last May aged just 16…

The more eagle-eyed and geographically-aware reader will have spotted something amiss in two of these stories:

Mm-hmm. Thing is, there is no such place as Tirol in Moldova. This error has infected the Bugduv-to-Liverpool story further down the page:

“It just is a matter of making what is the best deal for him and for his club Olimpia Tirol who have nurtured him from eight years of age to what he is now, a full international.

By the way, a search for “Bugduv” on the AP’s website comes up with nothing.

Mind you, goal.com did mention him in their preview of a World Cup qualifier in September.

Time to dig into Wikipedia’s history bins. The entry for the Moldovan national team used to contain this–

The great hope of Moldovan football is the teenage sensation Masal Bugduv who has been watched by a host of top clubs around Europe. At just 16 years of age, he has already been named in the country’s provisional squad for the forthcoming World Cup campaign.

I emailed the author of the comment on The Offside which originally sparked my curiosity. He turns out to be a man called Ivan Makarov, and he’s the sports editor for the Russian newspaper SovietSport. His contacts in Moldova had never heard of a Masal Bugduv. In fact, neither his forename nor surname are typically Moldovan.

Ivan put me in touch with Lavrentii Aniscenco. Lavrentii is the editor-in-chief of moldfootball.com, and he said (email quoted with permission):

This person doesn’t exist…He never played agaist Armenia (I was at this match)…I learned about him today, and discovered a lot of fake information about him in the Net…

Indeed, many blogs and message boards have had supposed stories about this Moldovan hotshot posted in their comments sections, under a variety of usernames. A recent incidence on the Independent‘s site had our Masal lashing out at Harry Redknapp for his apparently dismissive attitude towards Moldovan football.

Lavrentii pointed out another blog post which mentions a report in a Moldovan newspaper called Diario Mo Thon. Such a publication, Lavrentii said, does not exist.

And it’s here that we may have hit the nub of the issue. It seems certain that “Masal Bugduv” is the invention of a prankster, likely from Ireland. Mo Thón, you see, is the Irish for “my arse”.

As practical jokes go, this one has been quite successful, taking in goal.com and When Saturday Comes, and now, the biggest scalp yet, The Times.

So, if you see an article linking your team with Masal Bugduv this month, don’t get too excited, okay?

Many thanks to Ivan Makarov and Lavrentii Aniscenco for their assistance.

Check out our guide to the best PayPal betting sites and new UK bookmakers. We offer all the latest free bets no deposit promo codes.