The bid by a few English clubs for the Brazilian wunderkind that never happened came much closer to reality than people might have imagined in 2013. After the controversial manoeuvrings out of the media’s eye orchestrated by Neymar’s agent – putting his client and himself in pole position to have the most earning power and play for perennial European championships – it has since become a matter of public record that Neymar might have in fact been on the brink of signing with Chelsea.

Thanks to Santos president Luis Alvaro de Oliveira, one of the key players in this whole transaction as Neymar stood to move from the club in his home country of Brazil (also where Pele played almost his entire career), we now understand the tantalising details of how close the fleet-footed attacker came to donning Chelsea blue.

Of course, all this negotiating and hand-wringing would have taken place three years earlier, in 2010. When president Oliveira got wind of how eager the English club was to sign the mere potential of Neymar, he made prompt and decisive actions to ensure that the London-based club would not be able to ‘include school for Neymar’s sister, work for the family, card [sic] and a load of benefits.’ He claims their level of accommodation included picking him up after a game at the airport after a faraway national match from south Brazil.

Instead, Santos ushered Neymar away in a car – Oliveira probably muttering a few dozen varieties of ‘God, please no’ to himself under his breath the whole way – to the undoubtedly cushy home of one of the team’s directors and urged him to hammer out the details and sign the contract right then and there.

As history would tell it, Neymar stood to make a well-deserved boatload of money, somewhere in the neighbourhood of 57 million to 97 million Euros about three years later on his transfer to Camp Nou. The Brazilian baller could have been easily been playing on English soil in the league with a rougher, more physical style of play. But now that this has not come to pass, is there any possibility Neymar might still meet the challenge of facing a league with greater parity and pace? Alternatively, might he elect to chase historic career success in his cushy club next to possibly the world’s most transcendent player ever in Argentine Lionel Messi as part of a transcendent attacking triumvirate?

Neymar himself has voiced some dubiousness over the possibility of ever joining an English side, not unlike the aforementioned Messi, who once said, ‘I have friends that are playing in England, like Kun Aguero and Wayne Rooney. These are two players that I like. The truth is my idea has been to always stay in Barcelona and see out my career here. I don’t know what can happen in the future but if it were up to me to decide, I would stay at Barcelona for the rest of my career.’

Neymar echoes these sentiments when asked about the possibility of following in the footsteps of former La Liga teammates Cesc Fabragas and Alexis Sanchez: ‘Alexis is a big friend and someone who I had the privilege of playing with at Barcelona.’ He added, ‘we used to get along very well on and off the field, so I’m very happy to see him so well at Arsenal. As for playing in England myself, I’m very happy playing for Barcelona and I still have a long road to walk here.’ 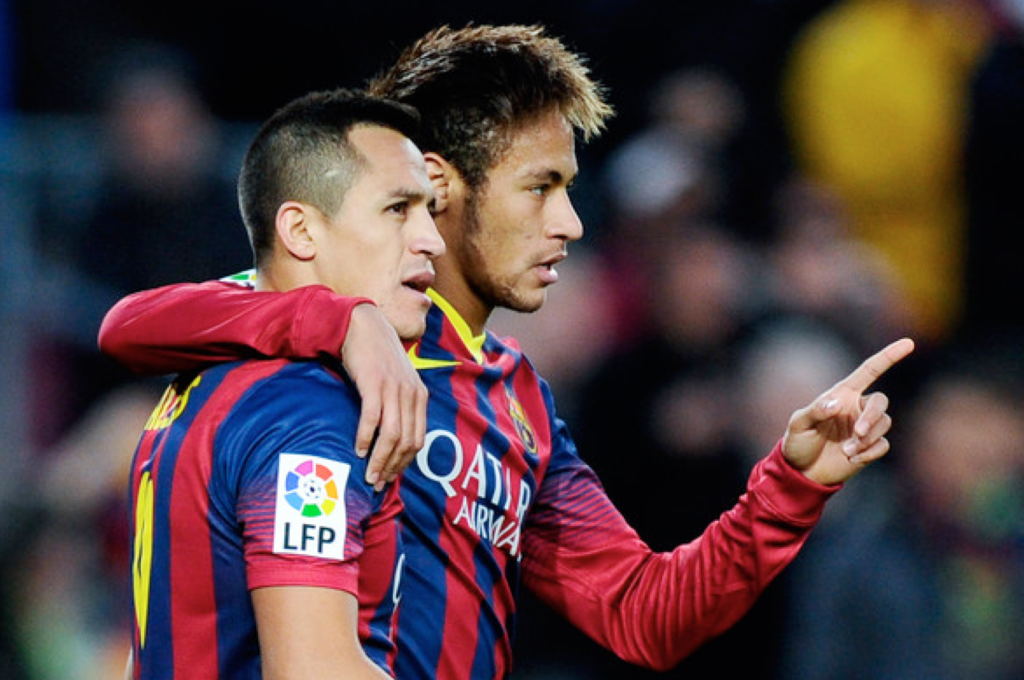 All of this seems to suggest that, while the Brazilian supernova might benefit from the added media exposure of the football-fanatic island nation, the humble striker seems currently set on chasing team success over brandishing his individual legacy. That said, with more endorsement deals for someone recently rated the most marketable athlete in the world, he certainly does not seem averse to the perks of building his brand with personal commercial endeavours, but this is just one factor of many he has to consider.

He is currently in an 11 year contract with apparel-maker Nike, and since online poker site PokerStars made him part of their team, he is the face of another industry-leading conglomerate. No doubt he would stand to benefit from playing as a standout superstar in a league with less top-heavy teams in one of the world’s best financial markets.

His deals with these brands have ensured his face is one of the most familiar in the world, and in fact shows the power he has to open up an industry such as poker to an even wider market.

Even while Camp Nou chases the likes of former United midfielder and current Juventus Frenchman Paul Pogba (Neymar recently admitted ‘He is still young, even younger than me I think. I think a player with such quality is always welcome… with open arms’), the club is facing some bad news from the legislative body that overlooks pecuniary misdeeds. Its lead club economic vice-president Javier Faus admits that the historic threesome could be disbanded by season’s end, much to the dismay of football historians and Barça fans alike. ‘We can no longer pay the most in terms of wages. That’s now Chelsea and PSG.’

The Camp Nou boss, who publicly fell out over contract negotiations with Messi last winter, continued to explain the grim financial reality for his club: ‘You have to understand that players always compare their net pay to those of the Premier League or the Bundesliga, who have pushed costs up dramatically.’ (If that sounds a bit like a football ‘first world problem’ for a club that routinely outbids other very wealthy suitors for star players, he will have to forgive rival fans for not shedding tears over Barça’s predicament.) Then, he outright states that ‘it will be a challenge, but we want to avoid letting Messi, Neymar, or Suarez go… but, if a club has the potential to take them away because of their chequebook, then they will go.’

Those words have to sound delicious to potential scavenging clubs like PSG, Chelsea, and Manchester City, especially since Neymar is the type of world-class player you could slot into any roster and expect success from.

At PSG, he would complement the physicality of Ibrahimovic and Cavani well; in Chelsea blue, under the watch of internationally-experienced Mourinho, he would thrive with similarly-styled midfielder Hazard in a frontline with Costa; at Manchester City, he would mesh with midfielder Toure nicely and could expect to replicate the success the sleight-of-build Villa found.

No matter where he finds himself, Neymar is a lock to embrace the challenge and find success on and off the pitch.