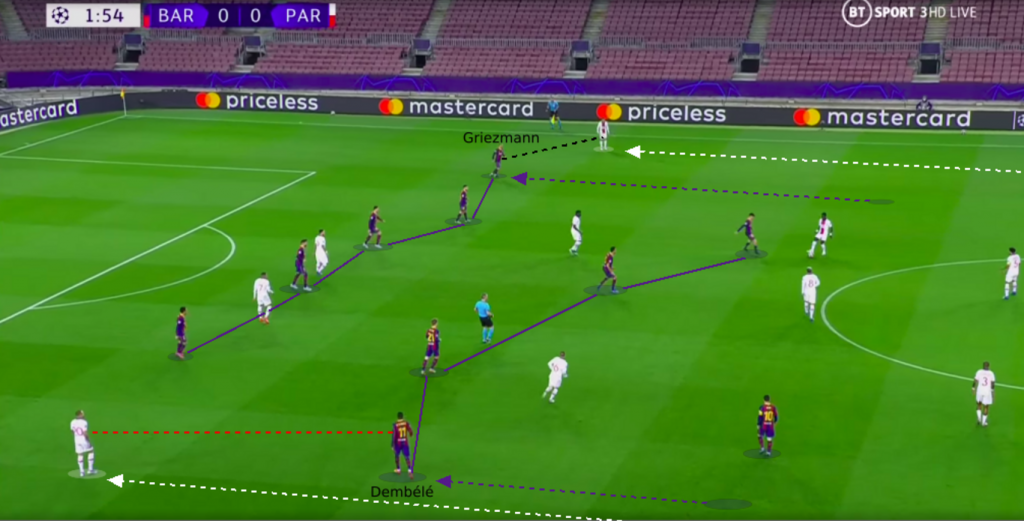 Almost three years after the historic remontada at Camp Nou which saw Barcelona overturn a 4-0 first-leg deficit to knock Paris Saint-Germain out of the UEFA Champions League, the two sides met again at the same place.

PSG had dominated their league and even reached a Champions League final in that period of time, while Barcelona were on a sharp decline.

They had lost key players, chopped and changed managers, suffered humiliation on the world stage and were now not even a shadow of their former selves.

Despite all of that, the match was set to be a massive battle. Although the hosts started well and even took the lead, it was PSG who emerged 4-1 victors. In this analysis, we will attempt to break down how they pulled this off. 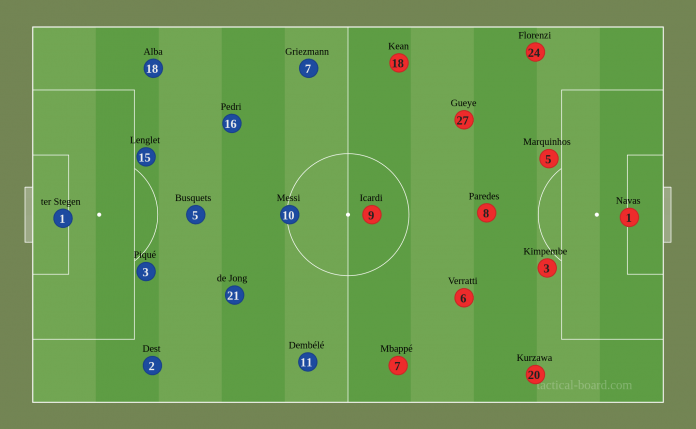 Barcelona lined up in their familiar 4-3-3, with Marc-André ter Stegen in goal. Sergiño Dest, Gerard Piqué, Clément Lenglet and Jordi Alba made up the defence, with Frenkie de Jong, Sergio Busquests and Pedri in midfield. Ousmane Dembélé and Antoine Griezmann were deployed on either flank, with Lionel Messi operating as a false nine.

Paris Saint-Germain fielded a 4-3-3 too, with their defence including Keylor Navas, Alessandro Florenzi, Marquinhos, Presnel Kimpembe and Layvin Kurzawa. Idrissa Gueye, Leandro Paredes and Marco Verratti made up the midfield, with Moise Kean, Mauro Icardi and Kylian Mbappé in the front-three.

PSG, especially in the Champions League, are known for applying a very high press. They did that against Barcelona too, here is how: 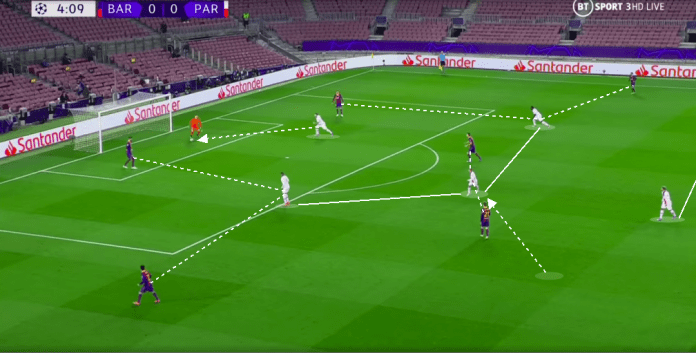 Goal-kicks were one of their favourite situations to press high, and they did so with a 3-1. Icardi applied pressure on the ball, while the two wide men stayed behind him, preparing to move out to their respective full-back or close down a centre-back if the opportunity presented itself.

Verratti pushed up from midfield to stay tight to the Barcelona holding midfielders, with Paredes and Gueye screening the defence behind him in order to protect it if the press was breached. 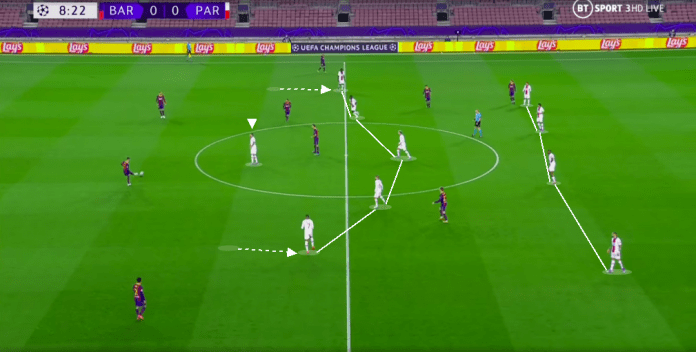 Further back, PSG defended in a 4-5-1, as the wingers dropped into the midfield line.

Over a decade ago, Pep Guardiola introduced the false nine to the world, with Messi becoming the first man to fill that role. After that, the Argentine forward has usually been used as a right winger, but under Ronald Koeman he has been restored to a central position. He had a similar role against PSG too. 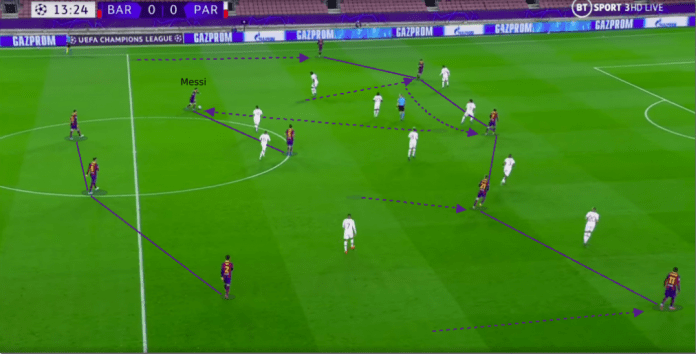 Barcelona effectively had a 3-2-5 in possession when Messi dropped deep, as he came all the way into holding midfield with Busquets. Of course, he drove forward from here, but his deep starting position allowed many teammates to make runs in front of him.

Alba pushed all the way up from left-back (unlike Dest), both Pedri and de Jong made runs from midfield, Griezmann came central (to accommodate Alba’s advance) and Dembélé held the width on the right. 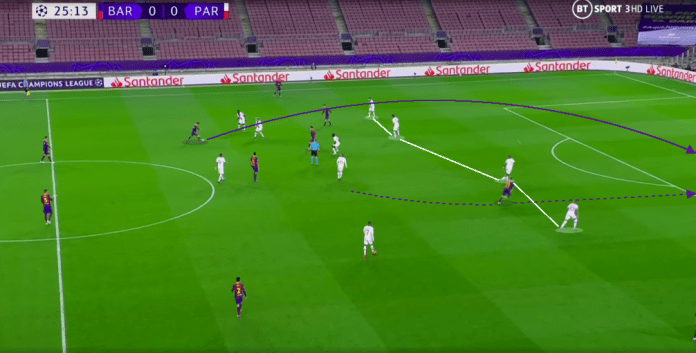 It was from such a position that Messi delivered a long ball over the top of the PSG defence that led to de Jong being tripped for the opening goal. 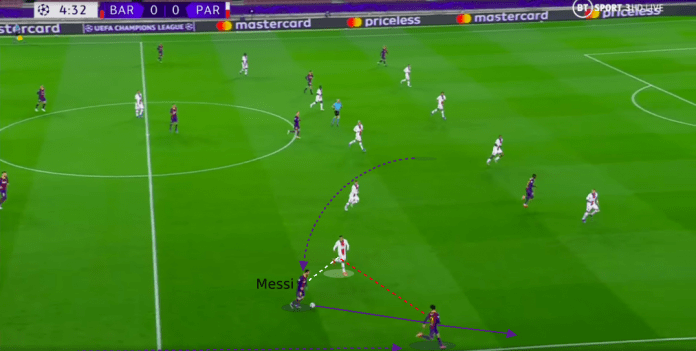 He often drifted out to the right too, overloading the defensively weak Mbappé along with Dest, who only pushed forward in such situations. This is why Barcelona attacked from the right as many times as they did from the centre. 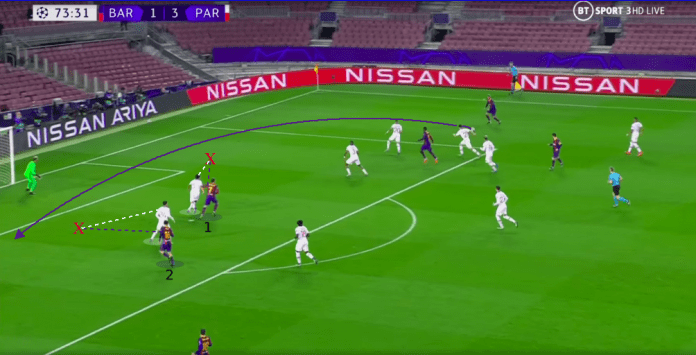 Given the congested centre in this match with a 3v3 in midfield and Messi dropping into it often, Barcelona had to go out wide in the final third in many cases. This is where their lack of a striker hurt them – they had very few bodies attacking the crosses.

None of their front-five of Dembélé, de Jong, Griezmann, Pedri and Alba are renowned for their heading ability, so the hosts really struggled in that department.

Therefore, it was quite easy for PSG to defend Barcelona’s 11 crosses, of which only two found a Barça head.

Koeman attempted to solve this by bringing on Martin Braithwaite, but he waited for 85 minutes before doing this, and then it was a matter of too little too late.

Although they only had 47.5% of the ball, PSG undoubtedly used it a lot better. 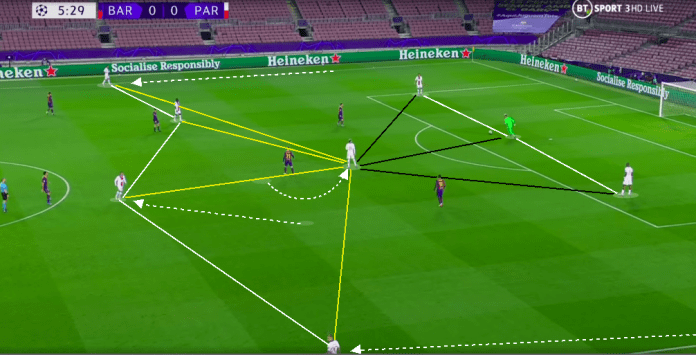 PSG built up from their defensive third with a 3-1-4, with Navas playing a key role. The two centre-backs moved to either side of him, while Paredes dropped deep from midfield to act as a link between the defence and the rest of the team. The two full-backs pushed forward, while Verratti was typically positioned slightly further than Gueye. 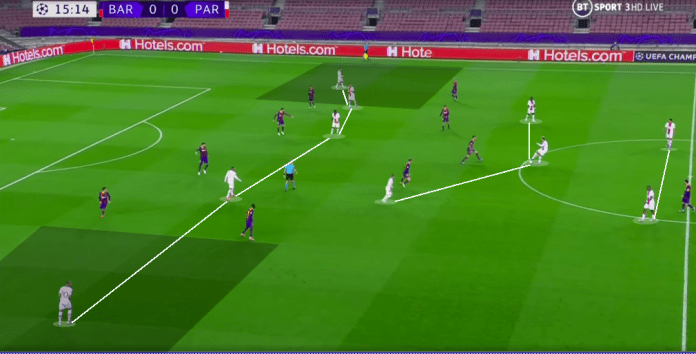 PSG’s wide men tucked inside to accommodate their advancing full-backs, who pushed all the way up to the front line in possession. Therefore, in the attacking phase, they had a sort of a 2-3-5, with lots of space on the wings as Barcelona’s defence was squeezed by the narrow front-three.

Now, let’s take a look at how Barcelona tried to stop this.

Defending has not been one of Barcelona’s strengths this season, as is highlighted by the fact that they have the worst defensive record in La Liga’s top five. Here is how they attempted to keep things clean at the back against PSG: 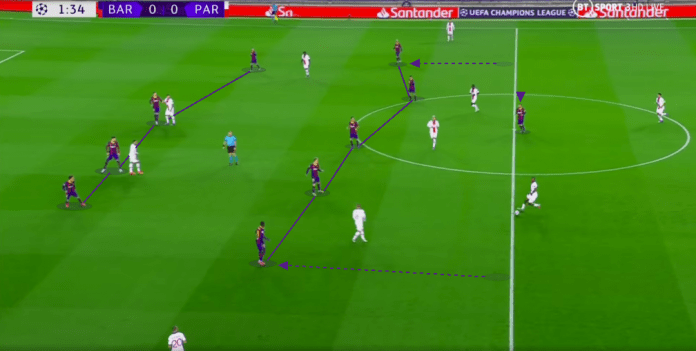 Out of possession, Barcelona sat in a 4-5-1, with the two wingers joining the midfield line – just like PSG did. 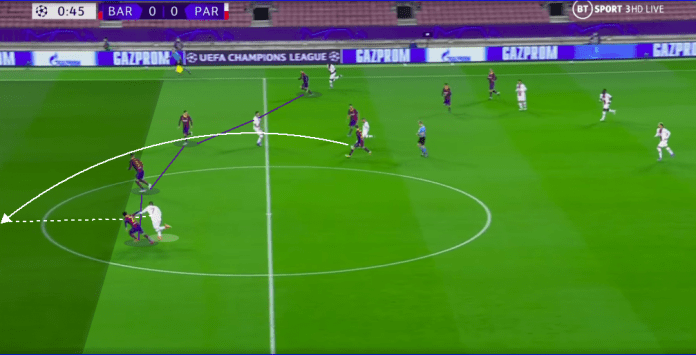 Barcelona initially attempted to defend with a high line, but it took less than a minute for PSG to exploit that through Mbappé’s pace.

After that, they decided to drop off a bit, as you can see below. 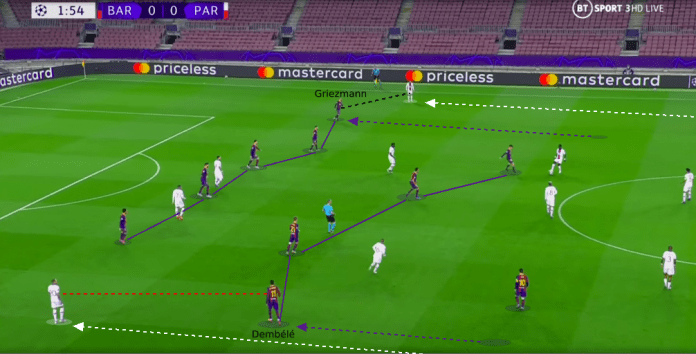 The Barcelona wingers dropped back in order to track the advancing PSG full-backs. Griezmann did this job a lot better, sometimes even going as far back as the defensive line in order to keep Florenzi in check.

On the other flank, Dembélé did not track Kurzawa so well, as you can see in the image above. Therefore, the left-back was one of PSG’s main attacking outlets, which is why 45% of their advances came from this side.

With a nice 69% of their attacks coming from the flanks, PSG evidently exposed Barcelona’s lack of width. Here is how they did it: 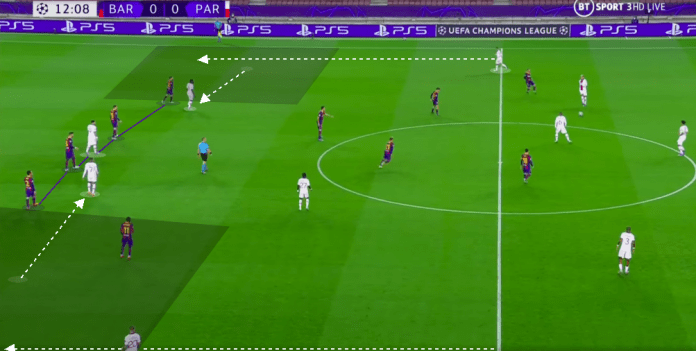 As previously discussed, PSG’s forwards all tucked inside, aiming to force the Barcelona defence to become as narrow as possible. In doing so, they opened up space on the wings for their attack-minded full-backs to exploit.

Most of PSG’s attacks came from the left as a result of Dembélé’s poor tracking of Kurzawa. That is precisely where Barcelona were punished for the equaliser. 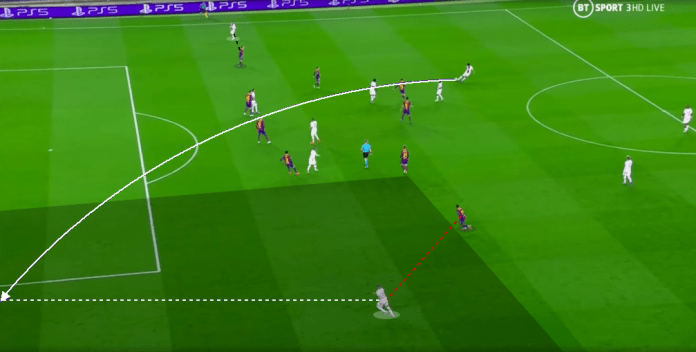 You can see the vast expanses of space that Kurzawa had quite well from this aerial shot. On the opposite flank, Griezmann is pretty close to Florenzi, but on the left, Dembélé is nowhere near where he should be. Such a situation is simply too presentable to waste for a quality-packed attacking side like PSG. 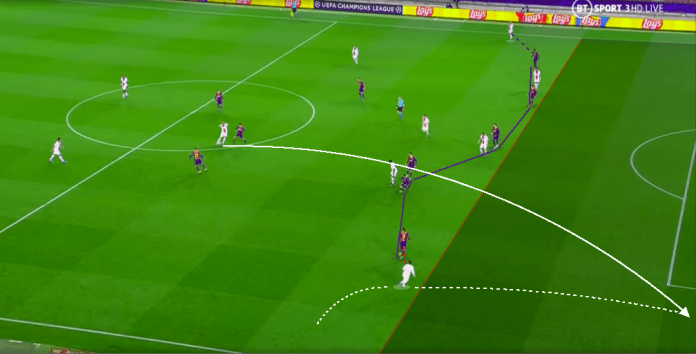 PSG profited on the opposite flank too, though. In this case, Barcelona are effectively defending with a back-six, as both wingers have tracked their opposing full-backs all the way back. However, with so many numbers in defence, they lost coordination in terms of maintaining a straight line, allowing Florenzi to ghost in behind Griezmann while keeping himself onside with an angled run.

In this way, Barcelona were hit on either flank for one goal each.

As is often the case in big games of late, Barcelona were completely and utterly outplayed. There was a spell in the first half when they were in command after they took the lead, but they could not make it count on the scoreline in spite of creating a couple of decent chances, and they were made to pay for that.

As for Paris Saint-Germain, they were set up perfectly by Mauricio Pochettino, for whom this victory must be that little bit sweeter because of his Espanyol days. The Parisian full-backs ran riot against a seemingly helpless Barcelona defence, while Mbappé was supremely clinical in front of goal.

PSG surely have one foot in the quarter-finals, but that’s what we were saying three years ago. However, that Barcelona and this Barcelona are two very different teams, so another Remontada seems extremely unlikely.

But, as long as there is a football match, there will remain some hope for the Culés, no matter what state their club is in.