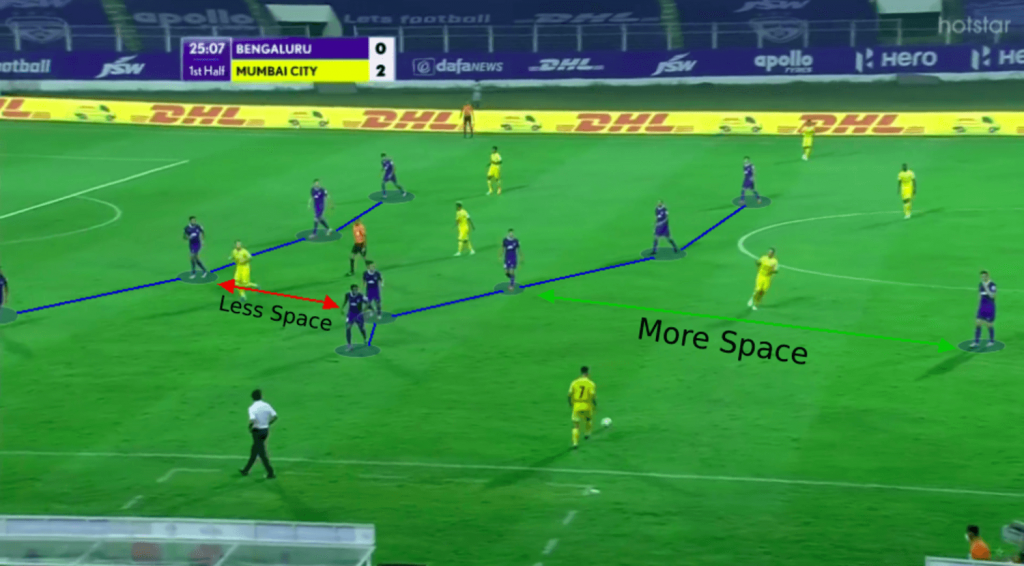 The match between Bengaluru FC and Mumbai City was being built up as quite a big one, where the Blues were looking to bounce back from a disappointing run of two straight defeats, while the Islanders wanted to keep their winning streak going. The game itself, however, wasn’t a great battle in any way, as Mumbai dominated it and came away with a convincing 3-1 victory. In this analysis, we’ll take a look at why the match was such a walkover for the Islanders: 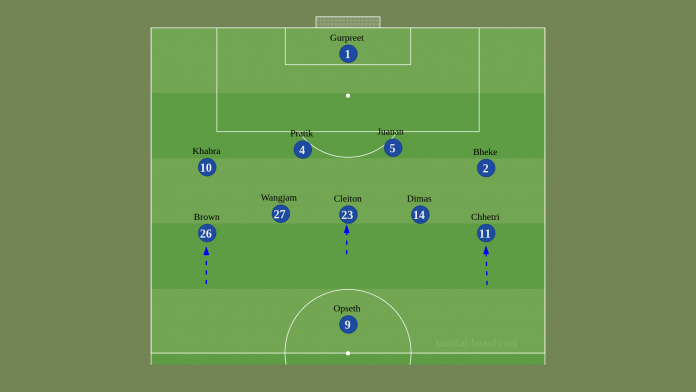 Bengaluru FC fielded a 4-2-3-1 on paper, but the defended in a 4-5-1 (or at least they tried to). The attacking midfielder and wingers collapsed into the midfield line out of possession, as you will see below: 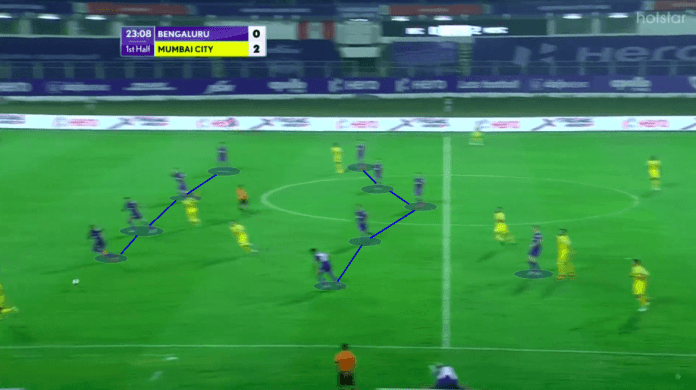 Carles Cuadrat said that a high press would almost always get punished against Mumbai City, so he didn’t deploy one. Below, you can see that Kristian Opseth is the only man in frame, and he too is inside his own half. 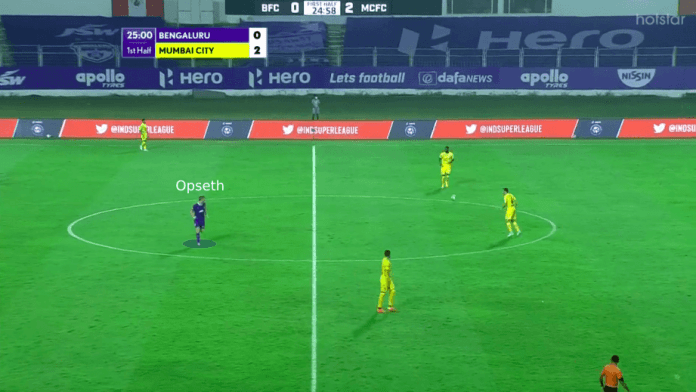 The rest of the Bengaluru side were within their defensive third. 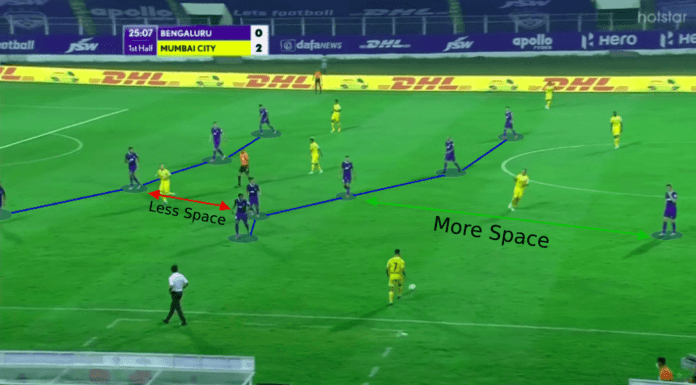 The idea was to minimise the space between the midfield and defensive lines while also making sure that there was little space in behind the defence for Mumbai to run into. This meant that Opseth was disjointed from the rest of the side on many occasions. 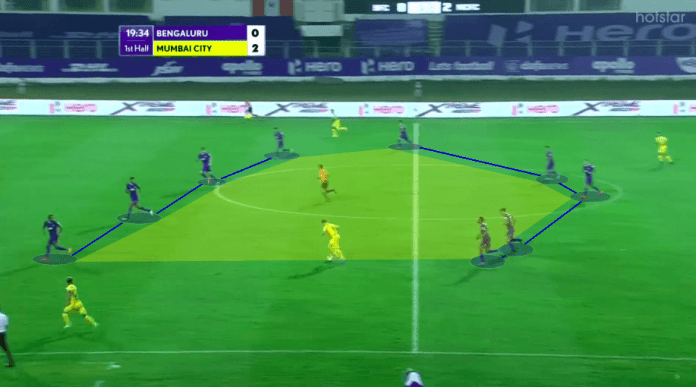 However, they weren’t compact either by any stretch of the imagination in many instances. There were absolute acres of space between their lines very often, so it’s a bit puzzling to try and figure out what Bengaluru were really trying to do. Sometimes, we got to see some very intriguing shapes from Bengaluru FC. 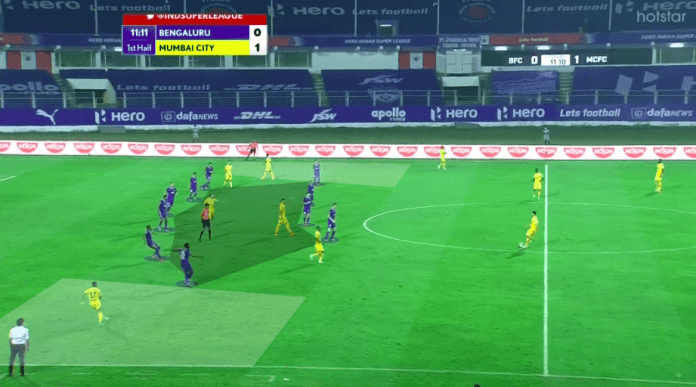 This here looks like a 6-4 formation, and even this is clearly not. It’s not compact in any way – there’s acres of space out wide and a sizeable gap between the lines too. This is perhaps one of the most confusing images we’ve seen all season. This curious attempt at defending quite obviously failed and Bengaluru FC were quite lucky to be only two down at the break. 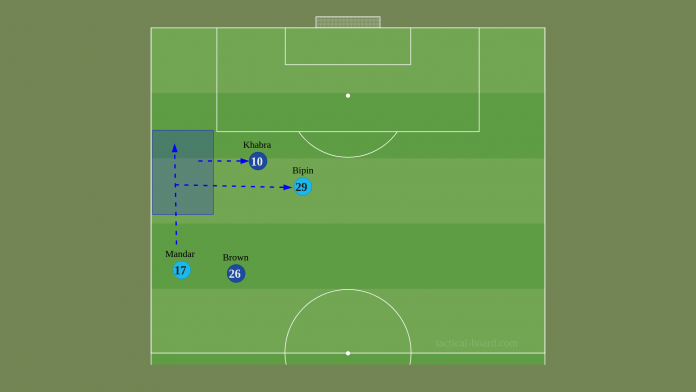 The selection of Deshorn Brown on the right wing also hurt Carles Cuadrat massively. Sergio Lobera set up his men to exploit it by instructing Bipin Singh to drift inside and take Harmanjot Khabra with him when Mumbai City had the ball, opening up space for Mandar Rao Dessai to run into. Since Brown is a striker by trade, his tracking skills weren’t great, so Mandar Rao Dessai had a most enjoyable picnic’s worth of space on the left wing. 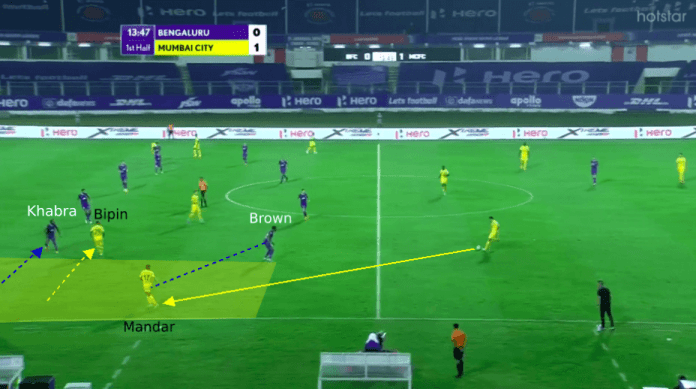 You can see that in practice above. Bipin Singh is moving infield and taking Harmanjot Khabra with him. Mandar Rao Dessai has a lot of space to advance into on the left, while Deshorn Brown has failed to track him, leaving him with a lot of time to go with that space. 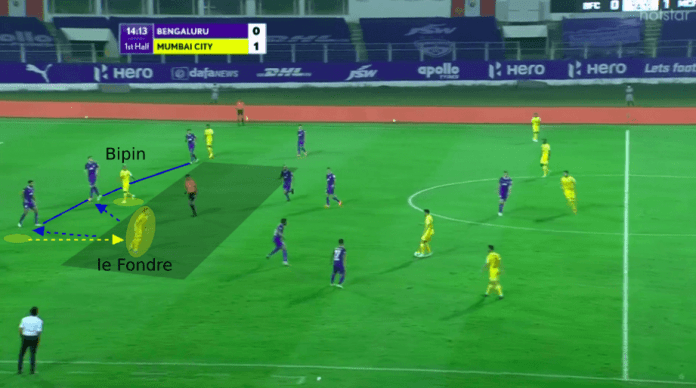 After drifting inside, Bipin had to work with Adam le Fondre. The Indian winger usually stayed as high up the pitch as possible in a bid to stretch Bengaluru FC’s defensive line, while le Fondre dropped into the space in between the lines. 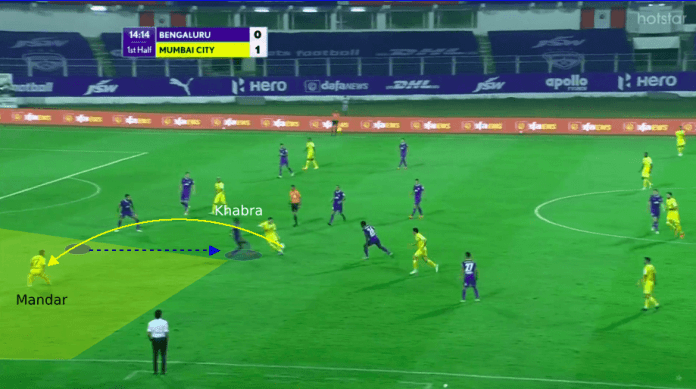 From such positions, le Fondre could also help drag defenders out of position. In this instance, he pulled Harmanjot Khabra even further away from Mandar Rao Dessai, creating yet more space on the left for the full-back. 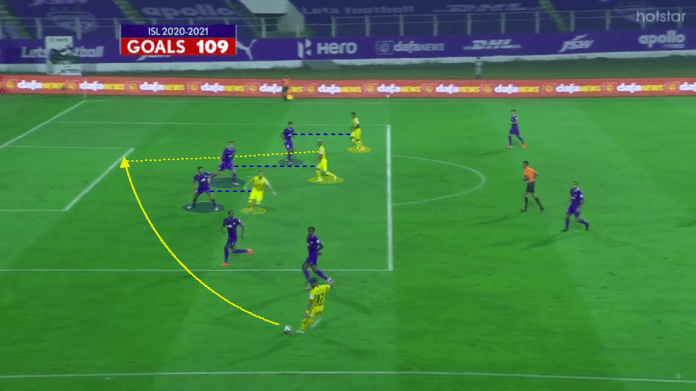 After Mandar advanced and reached a crossing position, Mumbai essentially had a 3v3 situation in the opposition box since Khabra was right at the edge of it and would never be able to get anywhere near the cross. Mandar delivered an outstanding ball for Bipin, who found some space between two defenders and cushioned it home. 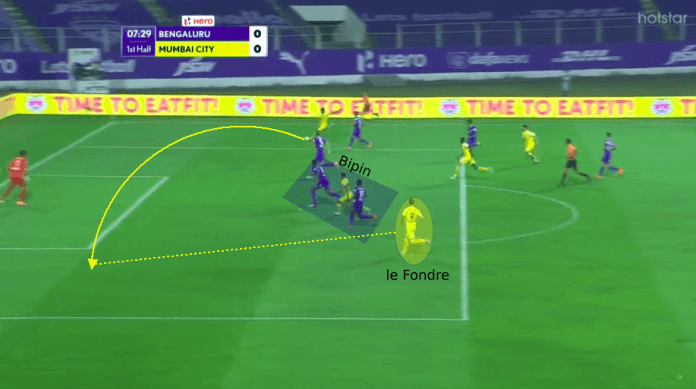 Bipin’s movement to the middle also meant that Mumbai had one extra man attacking crosses (as was evident for the goal). So, his presence would attract the two Bengaluru centre-backs, leaving Adam le Fondre absolutely free to attack the ball with a late run. In this way, Mumbai City created an absolute field day on the left for themselves, and they made the most of it too by scoring from one such situation.

In the initial stages of this season and certainly, throughout the previous campaign, Bengaluru FC relied heavily on set-pieces to score their goals. However, lately, they’ve stopped scoring from dead-ball situations, but are conceding instead. Against Mumbai, they let two set-piece goals. Here’s how it went: 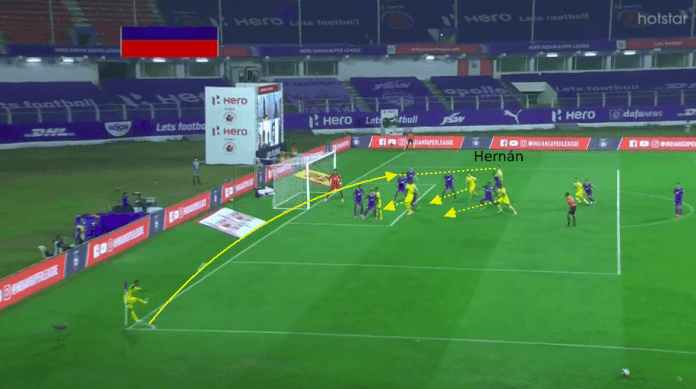 Bipin Singh delivered a corner deep to the far post region, but almost all of the Mumbai attackers moved to the near post to drag the Bengaluru defenders away. The only man who went to the far post was Hernán Santana, who easily outmuscled Harmanjot Khabra and headed the ball back across the box. 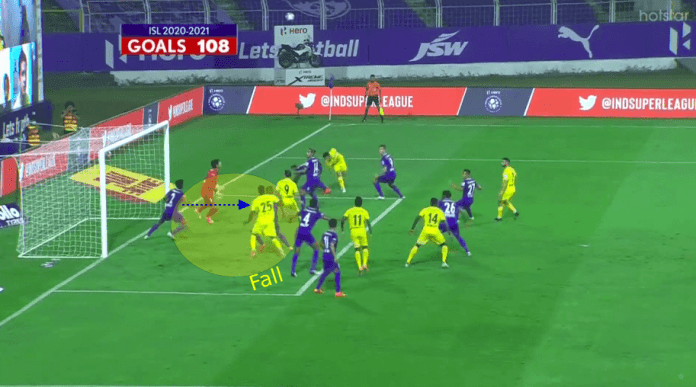 The header across was looping towards Mourtada Fall, who had isolated himself with Juanan despite all the congestion. Rahul Bheke also made a failed attempt of coming off the line and heading the ball, so the Senegalese defender powered his header into the goal from close range. The Blues conceded from a corner in the second half too. 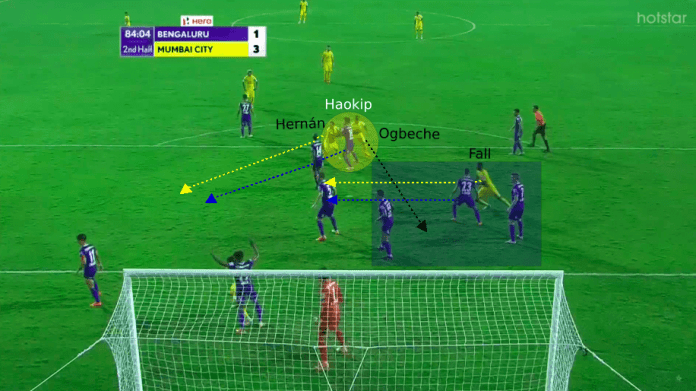 Here, Bengaluru FC have a 9-4 advantage in the box, yet they have allowed Mumbai City to create an overload on Semboi Haokip through Hernán Santana and Bartholomew Ogbeche due to their attempt at zonal marking. The area marked in blue is where the ball will be delivered, so Hernán takes Haokip in the opposite direction, while Mourtada Fall also evacuates it, taking a man with him. 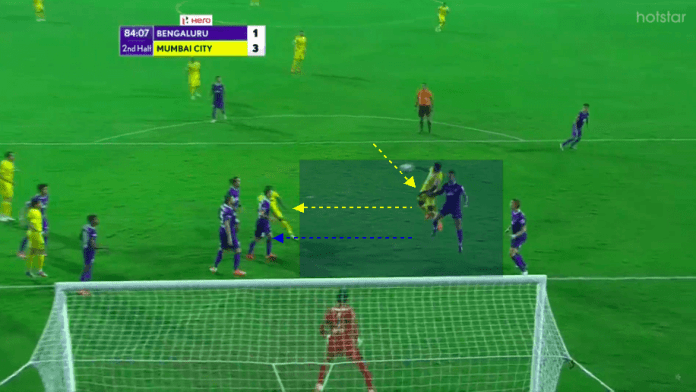 Fall’s gravity took Cleiton Silva out of the area of the delivery, leaving only Fran González defending it. Ogbeche blindsided him with his run and had greater momentum, so he easily got to the ball first. While his header wasn’t exactly great, Gurpreet Singh Sandhu’s mistake gifted him a deserved goal. So, Bengaluru FC set-piece woes continued, as they conceded their third and fourth set-piece goals of the season.

Mumbai City were at their best in the first half, when they blew an admittedly poor Bengaluru FC side away with their possession-play. Sergio Lobera did a great job of plotting to exploit Bengaluru’s weakness on their right, and his players executed his plans brilliantly. Things are going steeply downhill for Carles Cuadrat’s side on the other hand. His selection of Deshorn Brown on the right will surely come into question, as will his tactics. While a portion of their attacking problems can be attributed to the lack of Ashique Kuruniyan, none of the issues we have discussed are related to that. Set-pieces, once the Blues’ best friend, have now become one of their main enemies. A tale of two sides on two different paths this season – the mighty Bengaluru FC look to be falling, while Mumbai City are very much on course to their first-ever ISL title.