Chelsea will be looking to make it two wins on the trot in all competitions when they take on Swindon Town in the Capital One Cup third round at The County Ground on Tuesday night.

All eyes will Juan Mata, who has been confirmed as a starter by Jose Mourinho. Mata, Chelsea’s Player of The Year for the past two seasons has had limited playing time under Mourinho, who has cited his inability to fit into the current system at Stamford Bridge, which sees Oscar assume the No.10 ahead of Mata.

The Spaniard was left out of the matchday squad against Fulham on Saturday, and this is his big chance to prove his manager wrong.

Point to Prove: Juan Mata will be looking to put in a top performance

‘If he proves that I’m wrong, I will be the Happy One, because I want him to be fantastic’, said Mourinho on Mata. ‘I hope he tells me on the pitch, ‘You are wrong, I am the best and I have to play every game.’My idea is that he is a top kid and a very good professional and I’m waiting for a professional reaction.’

Swindon Town though, will be giving away no favours as they look to continue their run in the Cup. They beat QPR 2-0 in the previous round and will be looking to add another London team to their list of coups in front of their home fans. They will take inspiration from Bradford City’s run in the Capital One Cup last season, as the League Two side beat the likes of Wigan Athletic, Arsenal and Aston Villa en route to the final.

Getting the better of Chelsea though, is a different ball-game altogether and they will have to be at the utmost pinnacle of their games to beat a side that includes Champions League and World Cup winners.

Swindon manager Mark Cooper faces an injury-crisis, with his biggest headache being the absence of in-form striker Ryan Mason. Mason, who is on loan from Tottenham Hostpur, has scored 4 goals in 5 league appearances thus far this season, but is set to sit this game with a thigh problem.

Also on the long injury-list are Ryan Harley (knee), Aaron Oakley (foot), Tijane Reis (knee) and Alex Smith (knee). Nathan Byrne is also out as he serves the last of his three-game ban.

Another Spurs loanee, Alex Prithchard though, is set to feature after returning from suspension.

Jose Mourinho has a fully-fit squad to choose from, but he is set to make several changes from the side that started in the 2-0 win over Fulham at the weekend.

Along with Mata, Mourinho has also stated that David Luiz, Michael Essien and Cesar Azpilicueta will all feature. Luiz was dropped for the Fulham game, while Essien has spent all his time on the bench thus far. Azpilicueta was Chelsea’s first-choice right back last season, but Branislav Ivanovic has played in that position in every game this time around.

Juan Mata (Chelsea): It is difficult to look beyond Mata whilst talking about the key players for this game. He has been off-colour so far this season, but this is the perfect opportunity for him to put things right. Whether he plays in his preferred role behind the striker or as a winger remains to be seen, but there is no doubt that he is the most creative player in this Chelsea side when in -form.

Nile Ranger (Swindon Town): Ranger will definitely start this game with Mason out injured and the former Newcastle United forward will look to take advantage of any slip-up by David Luiz and Co. in the backline. Interestingly, he already has a goal against Chelsea to his name, as he netted in a thrilling 4-3 win for Newcastle at Stamford Bridge in the same competition three seasons ago. 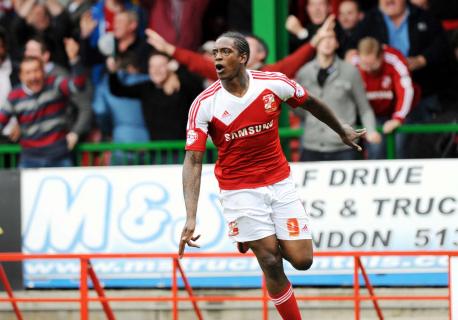 Once Bitten, Twice Shy: Nile Ranger has already netted once against Chelsea

The Swindon players will all be up for this game and with home support to buoy them on, will look to spring a shock. Chelsea though, look far too strong for them and with a couple of the players looking to make a strong statement to Mourinho, the Blues should run out comfortable winners.