Arsenal come back to domestic action after a devastating UEFA Champions League on Tuesday for an away game in Wales.

The Gunners blew a 3-0 lead to draw 3-3 at home to Anderlecht midweek ahead of their trip to a Swansea City side who have won only one of their last seven Premier League game.

Arsène Wenger’s side have won back-to-back Premier League games without conceding a goal but the Swans offer tougher opposition than Sunderland and Burnley whom they have been up against in their past two games.

Jordi Amat is still sidelined in the centre of defence, and Dwight Tiendelli is not expected to return for this game either.

Midfielder Jonjo Shelvey is suspended whilst Leon Britton hasn’t been fit all season.

Gylfi Sigurðsson and Wilfried Bony are the two in-form attacking players of late and both capable of penetrating Arsenal’s makeshift defence.

Backup goalkeeper David Ospina has had no luck with injuries since joining Arsenal in the summer. The Colombian number one is out of this one with a thigh injury.

Alexis Sánchez is a player very much in form but Arsenal fans will be wanting more out of striker Danny Welbeck who has not been performing of late. 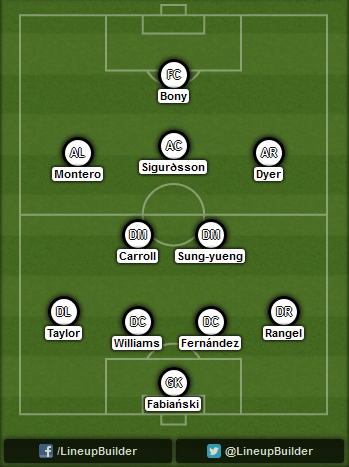 Garry Monk hasn’t had to make too many changes to his team this season and we expect the Swansea boss to named this starting lineup for the visit of Arsenal on Sunday. The defence has performed pretty well this season as well as their attack and the Welsh side have every reason to fancy their chances at home to an Arsenal team that are coming back from a heartbreaking result midweek. 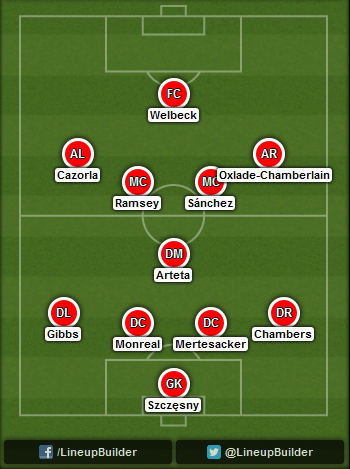 The Arsenal defence continues to pick itself and still looks vulnerable. They shipped three to Belgian side Anderlecht at the Emirates on Tuesday and don’t have much protection in front of that back four. Going forward it’s been all about Alexis Sánchez of late but the likes of Danny Welbeck, Aaron Ramsey and Santi Cazorla have all shown they are capable of scoring at some point during their Arsenal career.

Alexis Sánchez vs Ki Sung-yueng
Arsenal’s Chilean star has been in fine form of late with five goals in his last three games in all competitions and seven goals in his last seven Premier League games. Ki Sung-yeung has been a fine player for Swansea but faces a tough challenge alongside Tom Carroll in protecting their back four from Alexis Sánchez destroying the home side.

Gylfi Sigurðsson vs Mikel Arteta
Swansea’s Icelandic midfielder has made a big impact since resigning from Tottenham Hotspur over the summer. Gylfi Sigurðsson has been involved in eight goals, seven of which have been assists. He’s been linking up well with Wilfried Bony of late with the Ivory Coast striker finding the back of the net a few times of late. Mikel Arteta hasn’t offered great protection in front of his back four this season and Sigurðsson should fancy his chances of being involved in the goals in this game.

Alex Oxlade-Chamberlain vs Neil Taylor
Arsenal’s young England international is going to face stiff competition from a place in the starting lineup in the coming weeks from the returning Theo Walcott. We think Alex Oxlade-Chamberlain will keep his place this weekend and cause Swansea’s left-back some problems in this game. The winger has pace and strength and is coming off a goalscoring performance midweek.

Prediction: Swansea City 1-1 Arsenal
Arsenal’s confidence may be low after their disappointing result midweek. Swansea City, whilst out-of-form themselves are a decent team and their attacking unit should be capable of breaking down this Arsenal defence. The Gunners often drop points after Champions League games and we can sense them doing so once again on Sunday,