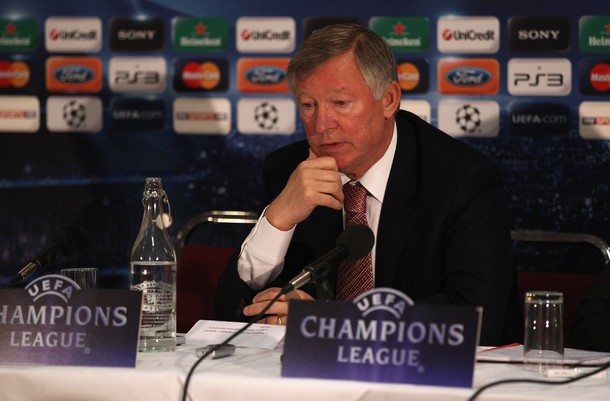 As the old saying goes, a picture is ‘worth a thousand words’ – and that was certainly the case with Sir Alex Ferguson during Monday’s  press conference where he confirmed Wayne Rooney has indicated a desire to leave Manchester United.

Of course there had been intense media speculation for days concerning the England striker’s future at United, but the fact that his manager, who is normally so cagey regarding matters such as this, gave such an insightful and honest representation of the situation was startling – as well as seemingly looking resigned to losing his star asset.

Defeatist? certainly a trait Sir Alex doesn’t possess but his mannerisms and honesty was amazing. Never before have we seen the great man conduct a conference in such a way. The revelation that Rooney had wanted to leave the club since the beginning of August is startling. Nobody could have envisaged this situation.

Sir Alex looked deflated and despondent. A player who he holds in such high esteem has seriously hurt him as a professional and equally as man. There is no denying the respect both have for one another and it seems all the more surreal that Rooney had indicated his desire to leave Manchester United. Once you’re at that club you never want to leave, especially for a lad who has grown up in the North-West.  This too has baffled Fergie – especially as Wayne stated to him that he loved the football club and wanted to spend the remainder of his career there.

Twenty four years at United and has he ever had such a profile name intimate their desire to leave? The answer is no.

He had his issues with David Beckham, Jaap Stam and Ruud van Nistelrooy but they no longer fitted to Ferguson’s model of rebuilding of a team. They left because it was the manager’s decision. Here is a player who despite his huge loss of form is one of the world’s best– and he no longer wants to play his trade at Old Trafford.

It was evident that Sir Alex felt uneasy revealing the circumstances but did he really have a choice? People had started to question him as well as the club about their conduction of the scenario. Rooney being left out at the weekend against West Bromwich Albion triggered bellowing cries from the Stretford End for his arrival – and this seemed to impel Fergie’s decision to reveal all. He doesn’t want the United faithful questioning his management of his players nor does he want the club to be negatively portrayed. Had he masked the topic with more contradictory quotes over his future  then it would have made the whole situation more opaque.

His revelation at such an early point in the season is a worry. How do United and Rooney respond? At this moment in time it is difficult to see him adorning a red shirt again – which begs the question; do United fans want him to? He is as an idol to them, a young man from a working class background playing for the giants of English football. They will be hurting because despite him growing up as an Evertonian, they have took to him as one of their own.

Sir Alex is hurting too, there is no doubt about that. This situation is as alien to him as anyone. He and the football club have helped Wayne develop into the player he is and Fergie stated that. He can’t put his figure on why he wants to leave – the only person who really knows is Rooney himself.

Sir Alex’s traditional characteristics were washed away during his conference. It was strange and compelling viewing. A six minute speech clearing up the speculation,  but it was the frank and honest statement that was shocking – really unlike Sir Alex.

This is now going to create a wave of media intensity and how it evolves is questionable. The news of Rooney wanting to leave is massive – nobody really could have believed the whispers until something came out of the club.

A real startling moment in the history of Manchester United Football Club. To use the word surreal would be an understatement.