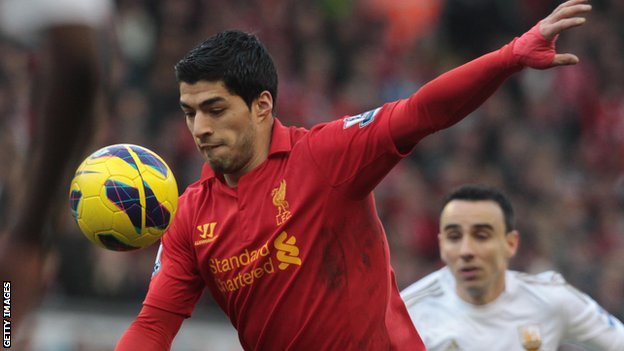 Liverpool’s supremely talented 26-year old Uruguayan striker Luis Suárez excels in the art of controversy. There are surely few players with such a rich and varied portfolio of misdemeanors in modern football.

Suárez’s catalogue of controversial incidents since arriving to play for Dutch Eredivisie side Groningen in 2007 has been well documented in the British press (e.g. “Luis Suárez: 10 previous controversies involving the Liverpool striker”, The Guardian, 21.4.13 provides a good summary).

Suárez is currently in the spotlight again amidst a frenzy of transfer speculation, thought to be driven jointly by Suárez and his agent Pere Guardiola, brother of Bayern Munich manager Pep Guardiola.

Rumours are growing that Suárez is seeking to engineer a move from Liverpool, preferably to Spanish giants Real Madrid, and has stated that it “would be difficult to say no” if Madrid were to make a bid for him.

The Sun newspaper has reported that Madrid president Florentino Pérez is prepared to offer £40m to take Suárez to the Bernabeu. Arsenal are reported to be still in the hunt despite having had a bid of £30m rejected by the Merseyside club.

Some might accuse Suárez of being ready to bite the hand that feeds him again. You have to question his sense of loyalty. It doesn’t look good. But, as former Liverpool and England player John Barnes has said, there is no loyalty in modern football. Maybe, then, we shouldn’t be surprised by Suárez’s desire to leave Merseyside.

But Liverpool football club, their players and, most of all, their loyal fans must have been hugely disappointed to hear Suárez chatting to Uruguayan radio station Sport 890 a few days ago about his transfer wishes saying, “My agent is in charge, he knows what I want. It is good to know I am valued by teams like Arsenal. Now there are two or three options and the club knows.” Suárez also surprisingly declared, “Friends call me up to ask if I am moving to Chelsea, to which I laugh.”

Earlier this week his agent Guardiola met with Liverpool manager Brendan Rodgers and managing director Ian Ayre to express Suárez’s desire to play for a Champions League club but apparently did not submit a transfer request on behalf of his client.

So, what next? Well, although this saga will no doubt run for some time yet, the writing is clearly on the wall. Suárez is very likely to leave Liverpool before this transfer window closes on 2 September.

Although it has been alleged that Suárez has a £40m buyout clause in his contract, it seems likely that Liverpool will hold out for more, possibly to test how desperately clubs like Madrid want to secure the wayward genius’s services.

It could be the case that Liverpool made up their minds long ago to sell Suárez to avoid the risk of him causing further damage to the club’s reputation. For, love him or loathe him, Suárez’s history means he is a potentially high risk signing for any club.

One key reason for this is that, despite his undoubted footballing genius, there is little evidence that he has learned from his catalogue of controversy. In fact, you have to question whether he genuinely feels remorseful about some of his behaviour.

It could be argued that Suárez has not been helped by a succession of managers trying to support him by seeking to absolve him from blame. Suárez appears to believe that he is the victim rather than the perpetrator of wrongdoing. Kenny Dalglish must still bitterly regret his ill-fated decision to support Suárez which many believe cost him his job as manager of the club so dear to his heart.

Suárez and his wife and young daughter have undoubtedly been on the receiving end of press intrusion, which must have been incredibly difficult to cope with. But, realistically, is it any wonder when you consider the number of controversial events that have invited negative press in the past three years alone?

He has expressed on several occasions how unhappy he is with the British media and claimed to have been “persecuted by the paparazzi” after the Ivanovic incident earlier this year. He has cited the behaviour of the press as the main reason he wants to leave England.

Which, of course, makes the speculation about a transfer to Arsenal all the more baffling. You suspect that, on the basis of what he has said over the past few months, Suárez has little intention of hanging around in England any longer than he has to.

If Suárez gets his wish and moves to Madrid, he may be shocked to find little difference between the level of media intrusion in Spain compared to Britain. How will he cope with that?

But, right now, the dream of getting away, making another big escape, is probably all that counts for Luis Suárez.