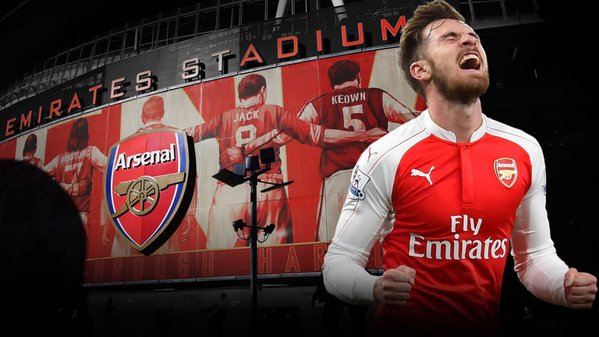 Ramsey was deployed in the central midfield in Arsenal’s crucial 3-0 win over Olympiakos. And the Welshman justified his manager’s faith by putting an impressive performance that took Arsenal to the knock stages of the Champions League for the 16th consecutive season, from the brink of elimination, which Arsene Wenger described rightly as “the great escape”.

The 24-year-old has registered the most passes (71) by an Arsenal player against Olympiakos, with an enviable 87.3% passing accuracy. He was involved in the build up to the first goal for Olivier Giroud, even though the final ball played to the Frenchman came from the wide area.

Gerrard, the Liverpool legend, believes Ramsey is wasted on the flanks, rather he should play more centrally. The former Liverpool captain went on to say that the Arsenal midfielder is the best attacking midfielder in the league.

“Mentally, I don’t think he’ll be happy himself playing out wide because he hasn’t got the legs,” Gerrard said on BT Sport, via FourFourTwo.

“His qualities are all in the middle and for me when he’s in that form he’s the best attacking midfielder in the Premier League.

“So you’ve got to play your best players where they want to be and I’m sure he’ll want to be in the middle.”

Is Ramsey the best central attacking midfielder in the league? Well, he is a brilliant player, no doubt, but he hardly plays centrally for Arsenal. And based on his limited appearances for that particular role, it is really hard to pass on any judgement.

This season, however, not many central attacking midfielders have impressed in the Premier League. Cesc Fabregas has been below par, Schweinsteiger and Yaya Toure haven’t been spectacular for United & City, while Jordan Henderson hasn’t played much for Liverpool this season. Tottenham’s young brigade of Dier and Alli have done reasonably well, but they still have a lot to prove.

Ramsey has always impressed when used centrally, and he has expressed his desire time and again to play in the middle.

With Arsenal facing an injury crisis in midfield, where both the first choice midfielders Santi Cazorla and Francis Coquelin currently injured, Ramsey’s return to central midfield can be a blessing in disguise for the Gunners.