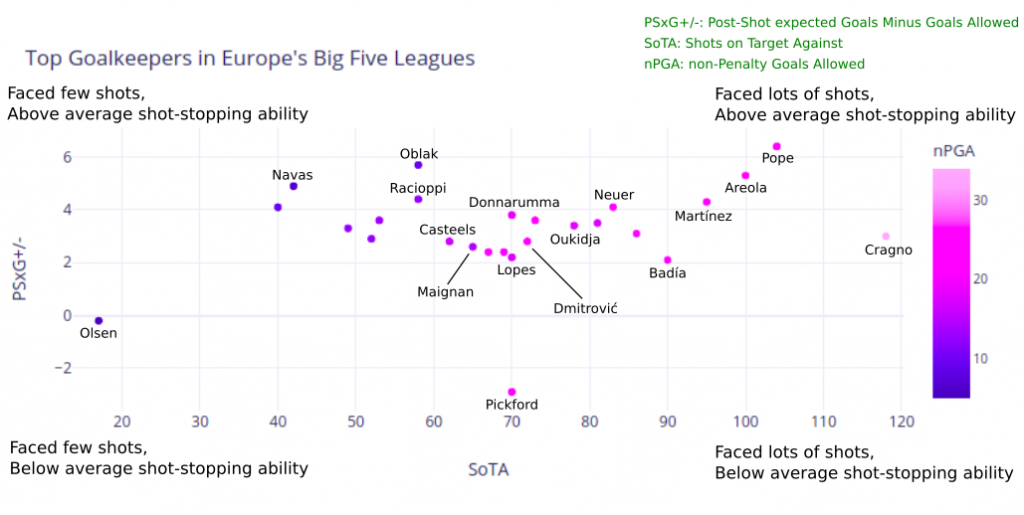 Carlo Ancelotti’s Everton have been resurgent this season. At the time of writing, they are placed in the Europa League spots with a game or two in hand relative to the teams above them in the table.

Their summer signings including the likes of James Rodríguez, Allan and Abdoulaye Doucouré have been firing on all cylinders, while old faces such as Dominic Calvert-Lewin, Richarlison and Lucas Digne have also been exceptional.

Protecting their own net, though, has been a bit of a challenge for the Toffees. No other Premier League side has played fewer games than Everton at the time of writing, yet they only have the eighth-best record in the league when it comes to goals conceded.

While their defence has not been particularly solid (they are at the very centre of the table when it comes to xGA), their goalkeepers have been suspect fairly often. Jordan Pickford ranks joint-second in the Premier League’s errors leading to goals list, while both he and Robin Olsen have conceded more than their respective PSxG (Post-Shot expected Goals – essentially expected Goals based on how likely the keeper is to save the shot) tallies.

In fact, such poor goalkeeping has already cost Everton seven points, besides making many matches a lot spicier than they needed to be. While such performances between the sticks are particularly enjoyable to the Liverpool faithful and, at times, even the neutrals, Goodison Park-frequenters would certainly prefer to iron them out.

Ancelotti persisted with Pickford pretty much throughout the first half of the season, only dropping him twice in that period – once after he came under serious media scrutiny for a season-ending tackle on Virgil van Dijk, which went unpunished due to the Dutchman being offside. Olsen deputised in those cases and has also started the last two matches since Pickford has been out of action due to a rib injury.

Yet, he too has failed to convince, and his poor performance against Manchester United (where he should have prevented at least one of the Red Devils’ three goals) has garnered some criticism too.

It must be noted that both of Everton’s goalkeepers can be outstanding at their peak – as was proven by Olsen’s fantastic triple-save against Leeds United, but the issue is that they both can be very inconsistent – an attribute that cannot be afforded by top teams in the modern game.

The Toffees’ third goalkeeper is Portuguese youth international João Virgínia, whose only experience at the professional level was a half-season loan at Reading last year, where he only made two starts and let in five goals. So, it is safe to assume that he will probably not be promoted to first-choice too quickly.

Therefore, it should not be surprising to see Everton in the market for a goalkeeper this summer, and if such performances continue, then contrary to reports, they would have to let Olsen return to Roma at the end of the season.

So, let us look at some of the best goalkeepers in Europe, and see who might be the best fit for Everton.

The graph above shows a selection of goalkeepers across the Big Five leagues in Europe relative to Everton’s two goalkeepers (Pickford and Olsen), using their PSxG+/-, SoTA and nPGA (explained in the top right).

The reason we have chosen strictly shot-stopping-related statistics here is that Everton’s goalkeepers generally do not need to be particularly outstanding with their feet. Their shot-stoppers rank joint-15th in the league when it comes to defensive actions performed outside their penalty area with just nine while placing ninth in terms of the number of launched passes (passes that cover over 40 yards off the ground) attempted with 396.

With that in mind, here are five goalkeepers that Everton could look to sign in the summer, in ascending order of suitability. Given the current financial situation due to the COVID-19 pandemic and Everton’s heavy investment last summer, we will only consider players that Transfermarkt value at or below £12 million.

The first man on our list is Eibar’s Marko Dmitrović, who has been making headlines at both ends of the pitch.

The 29-year-old shot-stopper has faced 72 shots on target this season, outperforming his PSxG by 2.8 so far this season. However, it must be noted that in the previous three years, he has underperformed his overall PSxG by 12.0.

More peculiarly, though, the Serbian keeper can even take penalties – as he proved by scoring the opener in his side’s 2-1 defeat against league-leaders Atlético Madrid. This means that he has both saved and scored a spot-kick this season. Get you a man that can do both.

His contract is expiring at the end of this season as well, but that is not as encouraging for Everton as it might seem at first glance. He has reportedly already agreed a pre-contract with Sevilla, so the Toffees will need a miraculous turn of events to get him to Goodison Park.

Ex-Lille and Strasbourg goalkeeper Alexandre Oukidja has been plying his trade for Metz since 2018.

This season, he has saved 60 of the 78 shots that have threatened his goal, while doing better than his PSxG by 3.4. This is not a one-off either – last year he conceded 4.1 goals fewer than he was expected too, indicating that he possesses the much-needed attribute of consistency.

His age of 32 means that his transfer fee should not be too hefty, but it also means that he does not have too many years left in him, and a move to a foreign land for the first time in his career might not be a wise decision.

French international goalkeeper Alphonse Areola has had quite an interesting career that has taken him from Paris-Saint Germain and Real Madrid to Lens, Bastia, Villarreal and now, Fulham.

Although Fulham have not been particularly good so far, Areola’s goalkeeping has certainly saved them on many occasions. He has faced 100 shots on his goal so far, saving 77% of them and outperforming his PSxG by a more-than-respectable 5.3.

While Fulham do have an option to buy him from Paris Saint-Germain, they are unlikely to exercise it if they get relegated, which looks quite probable since they are eight points away from safety. His contact in France lasts until 2023, though, and given the change in managers they have undergone in his absence, he might not be too easy to buy for Everton.

A goalkeeper who has very much gone under the radar all across Europe this season is Dijon’s Anthony Racioppi.

The Swiss under-21 international has not looked back after making his first professional start in November against Metz. He has kept Saturnin Allagbé out of the squad ever since, saving 46 of the 58 shots that he has faced and conceding 4.4 fewer goals than he should statistically have.

Given the fact that Dijon are currently second-bottom in Ligue 1 and seven points away from complete safety, it is not hard to see them being relegated at the end of the season. Racioppi has undoubtedly already shown enough to prove that he is worthy of a starting spot in a top-flight club somewhere across Europe’s top leagues, so this is where Everton could swoop in and get him for a relatively paltry sum.

Even if Dijon stay up, it is hard to see them resist the lure of an eight-figure sum for their goalkeeper, so Racioppi could prove to be one of the budget-buys of the 2021 summer transfer window.

If Everton are going to buy locally, they only have to look a few miles north east to see Nick Pope in Burnley.

The England international has been an extremely dependable shot-stopper for the Clarets since 2016, suiting their defensive style of play with his no-nonsense goalkeeping. This season, he has saved 79.8% of the 104 shots he has faced, outperforming his PSxG by a continent-topping 6.4. He did even better a couple of seasons ago when he saved Burnley by outdoing his PSxG by a whopping 10.7. He is on course to match that this year.

His no-nonsense style of goalkeeping was previously referenced – the Ipswich-born shot-stopper tops the league this season when it comes to attempted launched passes with 515. He is also better than anyone else in the league when it comes to sweeper-keeping, making 26 defensive actions outside his penalty area already this season.

Burnley are precariously close to the drop zone in 17th place, and even if Sean Dyche’s plucky side do not get relegated (they probably will not), it is about time for Pope to move to a bigger club because he has already celebrated his 28th birthday and will not keep attracting interest from elsewhere as he gets older.

Another personal advantage that the former Charlton Athletic goalkeeper will get by coming to Merseyside is that he will be pitted against Jordan Pickford directly – getting the chance to prove to the England manager that he is the rightful number 1 for the Three Lions.

Everton might have to stretch their wallets to sign Pope, but there is no doubt that he will be an outstanding transfer.

Irrespective of who they try to sign, it is clear that Everton need a reliable and consistent goalkeeper if they are to keep step with the big boys in England.

Ancelotti will undoubtedly be frustrated by the performances of both of his keepers so far this season, and there is a good chance that he has already asked his scouts to ramp up their surveys for a goalkeeper.

Pope should be their first choice, but there are several very good options in the market that the Toffees should consider.