As we build up to Wednesday’s massive Arsenal v Barcelona match, here’s a look at the some of the head 2 head stats between Barcelona and Arsenal players.

In Robin Van Persie, Arsenal have a striker in the form of his career, with the Dutchman netting a fantastic 10 goals in the league in 2011 so far.

Indeed, that haul in less than two months of the new year is the best ever figure for a striker in January and February of a Premier League season, with still some time in the latter month left to go.

The Dutchman, now free from injury, has also registered a 1.5 games per goal rate in the league, his best performance since moving to Arsenal in 2004.

However, if any player could top Van Persie’s fantastic form, it has to be Barcelona’s diminutive genius, Lionel Messi. In the league, the Argentinean has averaged a goal every 75 minutes while he has also notched 15 assists in his 20 games.

In the Champions League, while Van Persie has managed only one game (scoring one goal), Messi has been in typical inspirational form, scoring 13 goals in his last 11 Champions League starts including four in one game against Arsenal last season.

If the Gunners are to avenge that defeat, Robin Van Persie will need to be at his very best on Wednesday night.

Charged with the task of providing their forwards with a never-ending supply of goal-scoring chances on Wednesday are Arsenal’s Cesc Fabregas and Barca’s Xavi.

Xavi has continued on from his magnificent form during the 2010 World Cup finals, and has already provided five goal assists and a total of 50 chances created. However, his young compatriot has been even more creative in the Premier League. Providing nine goal assists, a figure only three players can better at this stage of the season.

However, while Fabregas also compares favourably to Xavi in terms of tackling, the experienced Barca man is still the fulcrum of his club’s play, making an incredible 119 touches per game on average and posting a 94% passing accuracy rate, both superior figures to those of Fabregas.

In the Champions League, Xavi has managed just the one goal assist so far (and no goals), although he has hit a competition-high 366 accurate passes in the opposition half. Arsenal captain Fabregas, on the other hand, has already bagged three goals and provided two goal assists.

The perfect playing surface of the Emirates will surely allow both schemers to show off their incredible passing games on Wednesday night.

While the likes of Messi and Fabregas will no doubt provide some of the highlights of the game on Wednesday, the outcome of the game may well depend on the performances of both sides’ backlines.

Laurent Koscielny has endured a mixed start to his career with Arsenal, but in recent weeks, his partnership with Johan Djourou has become vital to Arsenal’s title tilt. Indeed, with those two in position in central defence in the Gunners’ last seven league games, Arsenal have kept five clean sheets. Koscielny has also impressed in attack, netting two goals so far.

His Spanish counterpart, Puyol, has already netted one goal, while his distribution, like that of all the Barca players, is superb, with 91% of his passes finding a team-mate in La Liga.

In the Champions League, the French defender has won every one of his eight tackles in his two appearances so far, a rate superior to Puyol’s 60% tackle success.

With a plethora of attacking talent on show on Wednesday night, both players will have very busy nights indeed.

Arsenal will know what to expect after their quarter-final clash with Barcelona last season.

Over the two legs, Barcelona asserted their total domination of the ball, completing 654 passes more than the Gunners. Pep Guardiola’s were too much to handle over the two legs, unleashing 37 shots, that’s one every five minutes. Nearly half of those attempts found the target (18). Lionel Messi alone had nearly twice as many shots on target as the Gunners, testing Manuel Almunia nine times, four of which found the back of the net.

Arsène Wenger will be warned to wrestle the initiative away from Barcelona early on. Last season, Arsenal were battered in the first-half of their first leg at the Emirates. As shown by the average position graphic below, all of Barça’s outifled players – barring their centre-halves – spent the majority of their time in the Gunners half of the pitch. 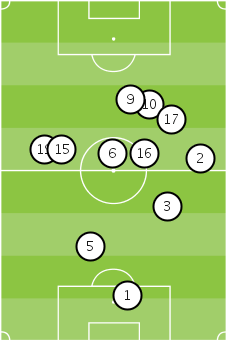 The four players who have completed the most passes in the opposition half in the Champions League this season all play for Barcelona. However, Arsenal can count on 19-year old Jack Wilshere to counter the Catalan steamroller.

Wilshere has made an instant impact in his first full campaign with the Gunners. He has already opened his account in Europe’s premier club competition, scoring in the 5-1 demolition of Shakhtar Donetsk. More impressively, he boasts more assists (3) than any Barcelona player in this season’s Champions League. He has also completed the most passes for the Gunners in the opposition half (211) and is Arsenal’s most accurate crosser of the ball in the competition with over half of his deliveries from wide areas finding a teammate in the box. After becoming Arsenal’s youngest ever player to appear in a European Cup game (against Dynamo Kiev in November 2008), Wilshere could come of age with a vintage performance against the three-time European Cup winners.

Most successful passes in the opposition half – Champions League 2010/11

Arsenal’s Chamakh is the most ‘Clinical’ Finisher

Arsenal’s Marouane Chamakh has so far converted over half his shots in this season’s Champions League, making him the most clinical finisher.

Arsenal’s Moroccan striker has scored three goals from only five attempts so far, so Barcelona will be well advised to keep a close eye on him. In terms of finishing, Bayern’s Mario Gomez has been scintillating, putting away six goals from only 12 shots while ex-Gunner Eduardo has shown glimpses of his old form, putting away half of his six shots.