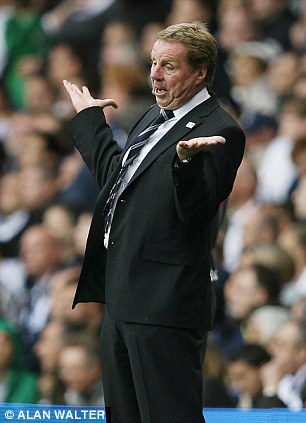 No-one is really doubting the job Harry Redknapp has done at White Hart Lane in the last two years or so. It seems even he tries to point out Spurs were bottom with two points after eight games when he arrived, almost at any opportunity. But, Spurs have had quality in their side for a long time now, with many believing it was only a matter of time before they -and not Man City or Villa – broke the mould that is the ‘big four’. So just how good a managerial performance was last season for Mr Redknapp?

Make no mistake about it, last season was an historic one for Tottenham. Their best ever Premier League finish, handing them a chance to play in the Champions League (after a shaky qualifier) was coupled with some of the best football they’ve played in a long time. At some points, they were unplayable. But this season, whilst I’ll admit we are still only four games in, they don’t look so dangerous.

No-one really knows why. Harry hasn’t made mass changes in the past transfer window; which comes as a refreshing change from the usual ‘panic-buying’ and over-spending which has been associated with Spurs in the past. He simply added to the squad, rightly pointing out it was already strong enough to beat anyone on its day.

There are no problems as to the signings yet, Gallas for free is pretty much a no-loss situation; and van der Vaart is already looking the class act he is said to be. We haven’t seen Sandro as yet, but there’s no reason to believe he could cause any unrest in the side. So that excuse of ‘gelling’ is out of the window.

With this in mind, my theory is that teams are beginning to ‘work Spurs out’. Think about it, last season they were successful because Harry motivated almost the whole squad into form: meaning Pavlyuchenko, Bentley, Bale and Dawson amongst others emerged as somewhat surprise packages.

Teams didn’t know how to deal with them, because they were almost like new players. Because Spurs are relatively unchanged from last season, clubs like West Brom and Wigan have had the chance to look at Redknapp’s side’s weaknesses and work at them.

It is very much the same thing that is happening (or has happened) to Arsenal, just down the road. For years Wenger’s tried and trusted has been exactly that. Beautiful football, on tap, until the more physical teams threw in a few hard challenges and sat behind the ball. But they couldn’t change their style of play, it was all they’d ever been taught; there was no plan B.

For a while at least, Arsenal were manageable. Fortunately for the Gunners, they seem to be improving their methods now and it’s proving successful again; but can the same be said for Spurs?

In all honesty, I can’t see Spurs qualifying for the Champions League again next season. It’s a strange thing to say, before we’ve even played our fifth game and before we’ve kicked a ball in the tournament itself; but the pressure of such regular football seems to be a little bit much already. That combined with their opponents’ familiarity of Tottenham Hotspur’s way of playing the beautiful game, means the question has to be asked.

Was last season a one-off?