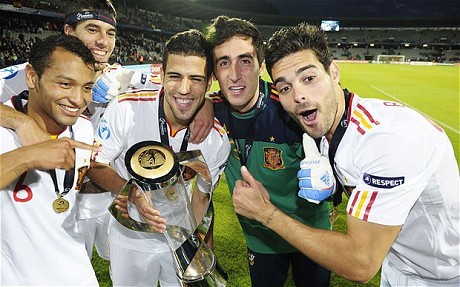 Always the perennial underachievers, the last few years have seen that theory put to bed.  Though the senior team went out in the second round in the 2006 world cup, their previous group performances were electric and a sign of things to come, only hiccuping when faced with a certain purple patch conjured by the majestic Zinedine Zidane and assisted by a blatant dive from the then golden boy Thierry Henry.

RECENT PAST
It could be argued that the turning point was Euro 2004, lazy as it may seem.  In a group with hosts Portugal, underdogs Greece and a Russia of old (as in for a long time there was no vision, hence no hope  – until revitalised by a certain Mr Hiddink several years later)) they were expected to grab one of the two place to wualify for advancement.  Nobody in that championship were expecting Greece to be so stubborn to win that trophy, so they are not the only team to fall behind them then.

But, despite some leading lights like Raul, there were too many average players knocking about (good, but way behind todays calibre).  Iniki Saez was sacked immediately after, once again they underachieved, a worrying trend now being that they had crashed out of the group stages twice in four major tournaments ( World Cup France 1998 being the other).  Enter Luis Aragones, and a new era.

NEW APPROACH
In the build up to 2006, new players had entered the fray, such as Cesc Fabregas and Andres Iniesta, and among others, David Villa.  David Villa’s inclusion was a big change, with huge criticism over his involvement.  It would be hard to see now, but his presence copped some serious flack.  Why?  Because a certain Raul Gonzalez lost his place, which was sacrilege.  Conspiracy theories were abound that Aragones didn’t pick him because he was the icon of Real Madrid and Aragones had a long standing history with rivals Atletico.  Much was heard about Villa before the World Cup that he was the real deal, but I for one didn’t know who he was.  His inclusion not just seemed to demerit the apparent ego that Raul was to have over the first team squad, but seemed to replace it with a more virtuoso figure as well.  Nowadays, there is no argument, Villa is one of the best five players in the world, no doubt.

In 2006, they ran roughshed over the group stages, hammering the second best team in the group Ukraine to a 4-0 washout.  Particularly memorable was the goal from Fernando Torres.  the finish was an instinctive low drive by the then Atletico forward, but the build up was probable the best football seen at that tournament early on.  Involving everyone, particularly Puyol, it was a sweeping quick move that left their opponents flabbergasted.  Until they went out to France in the second round, they looked like serious contenders.  Being eliminated seemed harsh when it happened, but they deservedly lost 3-1 (Editor’s Note: Thanks to a simulated Henry foul that gave them them the free kick from which to equalise).

That was about as low as it got however, for ever since then the Spanish have revolutionised football, and demolished all that stand before them.

SUPREME DOMINATION
Paying homage to Barcelona’s “tiki-taka” psychology, they swept through their competition at Euro 2008.  They beat everyone the played deservedly and with style, though the most significant victory on that journey had to have been against World Champs Italy in the quarter finals.  They also added bite.  Brazilian born midfield general Marcos Senna may have has a starting berth in the previous World Cup, but he was rather rushed into the team.  When two years had passed, he was fully blooded.  0-0 after 120 minutes against Italy, Spain had reached the shootout.  If they had lost, more tired conotations of “choking it” would surely have arisen.  Tired as it would have been to hear, it was true.  Spain had supreme talent for various World Cup and European campaigns, but the mentality of “underachievement” weighed down like an anvil.  This is when they banished it truely.  One week later, the hoodoo was broken, and they were European champions.

For all level of football enthusiasts however, this was to be not so surprising, as in the last decade especially, Spain have excelled in tournaments at under age level, such household names as Fernando Torres, Fabregas, Iniesta, David Silva and Iker Casillas have rightly caught the eye as ones for the future and have duly been a part of Spain’s most successful era.  On Saturday  night, they gained yet another underage trophy, the under 21’s cup in Denmark.  Once again, they swept all in front of them.  Once again, there are several who caught the eye, playing the Tiki-Taka they will eventually be bedded into.

Barcelona’s emergence as the greatest club in the world ties in perfectly with the national team, as they are nearly duplicates of the other.  Aside from captain and everpresent goalkeeper Casillas, bombing Sergio Ramos, technically brilliant Xavi Alonso and the apparent black sheep of the team Joan Capdevila, this was the Barcelona team.  Puyol, the master defender, the dominant Xavi and Iniesta, who together are too much for any midfield, pulling the strings, as well as Pique, Pedro and Busquets, who were not involved whatsoever in the 2008 triumph but now firmly entrenched in the first team without question.  Add in the enigmatic Villa, who had signed for but not played for Barcelona, and that is 7 starters from the catalan giants.  Vicente Del Bosque was a safe pair of hands, relied upon to carry on the breakthrough work of Luis Aragones.  Like any good coach, instead of changing everything around, he just added elements to the previous success.

DOMINATION ONLY STARTING?
There is plenty left in the tank too.  Ramos, David Silva, Fabregas, Pique and Pedro are all 25, 25, 24, 24 and 23 respectively, Iniesta, and Torres are arguably only entering their prime now, and Casillas is only 30 years of age, young by goalkeeping standards.  If he gets injured or off form, he ahs two world class replacements in Pepe Reina and Victor Valdes ready to step in, and eventually, Manchester United boun David De Gea.  At the rate they are producing players of the calibre of Jeffren, Thiago Alcantara,Iker Muniain, Juan Mata, Javi Martinez (the latter two involved in the World Cup campaign last year) and many others, the skies the limit.

Spain as a nation, just seem to be going from strength to strength, when arguably the standard of international football has decreased rapidly.  That is a harsh indictment, though it is backed up by the decline of nations with the history of Brazil and Italy.  A refocus on youth and freshness is the primary concern for the usual favourites now.  Germany are making the most headway, changing their philosophy after a less than flattering Euro 2004 just like the current world champs, whereas others like France and Brazil have put an emphasis on youth, though for different reasons.  France, disgraced into change, have got a manager of vision, one of their all time greats Laurent Blanc who is eager to make representing the team mean something.  Brazil have been in need of a new approach after their World Cup exploded in their face, blooding in and trusting homebased stars like Neymar and Ganso.  Italy, appear to be at a crossroads, with young talent in small abundance, while Argentina have a wealth at their disposal but underachieve due to various factors.

When the next Euro’s starts in 2012, Spain will no doubt be favourites and likely to win it again, with maybe only Germany causing hassle, and in the 2014 tournament, hosts Brazil will surely pose a threat, as well as Argentina who are never short of talent.

Whatever the case, don’t be surprised if Spain win them both.