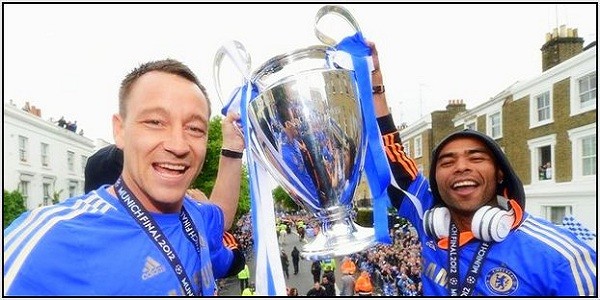 Due to issues well documented, Chelsea have had to do without John Terry of late.  How well they did is up for discussion, but on Sunday he was back… for a while at least.

Having scored the opener, Terry then collided with Luis Suarez and was forced to leave the pitch, looking very much like a man who’d kicked his last ball for quite some time.

But news coming from Chelsea suggests their captain will be out for weeks rather than months, which led me to wonder if, in the long term, they would be better off without him.

And before you answer, this isn’t just a footballing question.  It’s a question of reputation.

Take a moment to reflect on English football’s recent controversies.  What players do you think of… and what team?

If it’s not Chelsea, I’m surprised; because in the last few years, their players have done more than most to create both back and front page headlines for all the wrong reasons.

The man who leads them on the pitch has too often made poor choices off it; too many to list but I’ll try.

There was the time he and fellow Chelsea players drunkenly abused American tourists the day after the 9/11 terrorist attacks, for which he was fined two weeks wages.

Or the time he was investigated by both his club and the FA for reportedly accepting £10,000 in cash to show a reporter round Chelsea’s training ground.

How about his alleged affair with Vanessa Perroncel, the mother of Wayne Bridge’s child?  A scandal that led to him being stripped of the England captaincy, but not the Chelsea one.

And finally, there is the accusation of racially abusing Anton Ferdinand, an incident that led the FA to charge him with “using abusive language”, ban him for four matches and fine him £220,000.

By then he’d already been stripped of the England captaincy for a second time.

At most clubs, Terry would have been out the door long ago.  Or at the very least he’d be further down the line on match day.

Of course their defence is weaker without him.  But given sufficient time to form an effective partnership, Gary Cahill and Branislav Ivanovic have everything needed to succeed him.

Switching David Luiz to right-back or further up the field would also solve more problems than it causes (most of those problems of Luiz’s own making).

But the question of Chelsea’s reputation runs deeper than one player.

All clubs have misdemeanours. But only one has an incident where a senior professional decides it’s a good idea to bring an air rifle to the training ground; and an even better idea to shoot someone with it.

We all know the story.  Ashley Cole shot 21-year-old Tom Cowan from just five feet away during the student’s one-year placement at the club.  Chelsea later claimed to be “taking appropriate action”, the details of which were never made public.

This is old news… but it shouldn’t be forgotten.  Because 18 months later, the same player was charged by the FA after taking to Twitter to call them a “bunch of tw*ts”.

This warranted a charge of bringing the game into disrepute.  Shooting someone, it seems, does not.

It seems too obvious to state, but most managers wouldn’t stand for such behaviour.  At least you’d think so.

But Chelsea have employed most of them and still the stories come out.

There has long been talk of “player power” within Stamford Bridge, most recently in their apparent refusal to work with, or seemingly respect, Andre Villas-Boas.

And yet under Roberto Di Matteo they are playing some of their best, most creative and free-flowing football in years.

Finally, they are responsive to change; not just in style but in personnel.  For it is no coincidence that the arrival of Juan Mata, Eden Hazard, Oscar and Victor Moses has seen the resurgence of a team that for too long relied on the old guard, thought the Mourinho way was the only way, and were pandered to by a man with too much money.

There will come a time when Terry retires and Cole moves on.

If I was a Chelsea supporter, I’d want that time to be sooner rather than later.

Their club is on the cusp of making headlines for all the right reasons.  But there may have to be one last change before they are the only headlines.