The contenders are racking up, and after Fulham’s impressive 4-1 away win against lowly Crystal Palace, one could argue that two more efforts can be added to the list of contenders for the Premier League ‘Goal of the Season’. 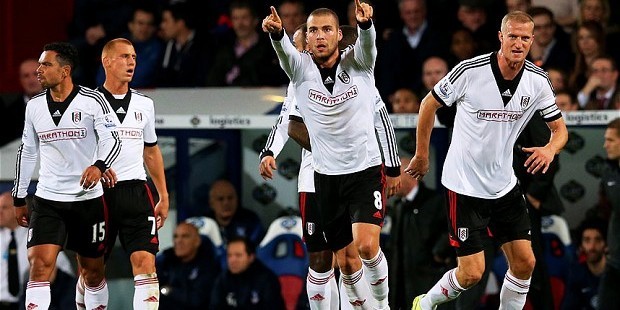 No, I’m not referring to Philippe Senderos’ admirable, yet ultimately amusing salmon impression for the fourth Fulham goal. Rather, Pajtim Kasami’s stunning volley on the run, and Steve Sidwell’s beautifully precise finish from the edge of the box. Both were magical, and we will surely be seeing them played back on the box until the day of reckoning arrives in May. Fulham boss, Martin Jol certainly has his favourite, with the Dutchman going so far as to say that Kasami’s effort was ‘better’ than the famous Van Baston strike in the Euro 88 final,

“It was better than you think. He controlled it on his chest and put it in the other corner,” said Jol after Fulham’s 4-1 win,

“Marco’s was very different. You can’t compare them, but this was better!”

Just two days before Fulham’s deadly duo, Jack Wilshere, or should I say, the Arsenal attack’s combined sorcery produced a goal worthy of topping any poll. The quick-fire, almost illegally casual process of scoring displayed by the Gunners typifies Arsene Wenger’s two decade long pursuit of composed, stunning interplay. A sort of goal one would find on a relaxed 5-a-side pitch, with side-boards incorporated to facilitate great looking football, it will surely be remembered for years to come, and not just by the adoring Arsenal fans.

Aaron Ramsey’s ‘Samir Nasri vs Porto’ effort sums up his sensational transformation from a player who was endured, to a player who is currently indispensable to the Arsenal cause. Leaving a total of three Norwich defenders on the grass in his wake, the Welshman’s devastating finish will strike fear into the hearts of the chasing pack. With Arsenal on this type of form, who’s to say that they won’t remain at the summit through the gruelling winter period, and out into 2014 and Premier League victory?

Away from the glitz and glamour of the English top flight, there was one more goal that has had fans and pundits alike singing its praises. Stephanie Roche of Peamount United, who play in the Bus Éireann Women’s National League of Ireland, scored an absolute peach of a volley over the weekend; and the media response has been enormous.

The Daily Telegraph covered the story, while Twitter has been awash with praise from famous sources. Gary Lineker has expressed his awe, and former Southampton legend Matt Le Tissier tweeted that it was the ‘goal of the season’.

Roche herself cannot believe the publicity her goal has received,

“I didn’t think at the time how good of a goal it was,” she told extratime.ie.

“But the hype over it is unbelievable. I can’t believe it.”

While her effort will not be up for the coveted ‘Premier League Goal of the Season’ award, it was a goal quite befitting of a weekend of magical moments. What do you think? Is one of the goals on the list bound for immortality come the end of the season?