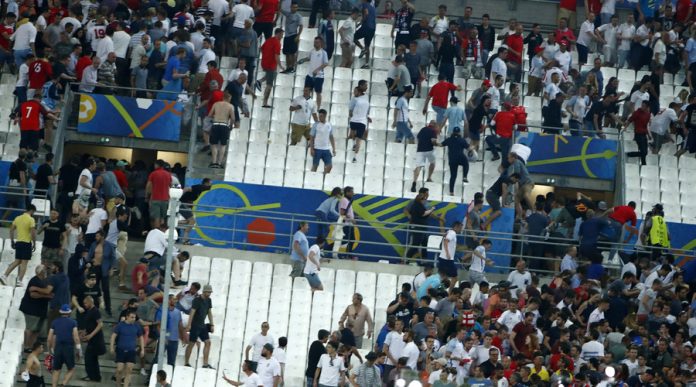 Russia will be disqualified for the European Championships if their fans are found guilty of any further violence during the remainder of the tournament.

Following the crowd violence in the aftermath of the 1-1 draw against England and in the days preceding the match, UEFA have moved to hand out a suspended disqualification and fine the Russian Football Union (RFU) 150,000 Euros.

RFU have been warned that the suspension will be lifted and disqualification imposed if “incidents of a similar nature happen inside the stadium at any of the remaining matches of the Russian team during the tournament.

Groups of Russian fans are also being deported from fans after being repeatedly involved in scenes of violence.

French police blamed 150 “well-trained” Russian hooligans for the clashes with England fans, and Alexander Shprygin, head of the Russian Union of Supporters, said 29 fans were being escorted to the airport.

Shprygin claimed he and 28 other representatives of fan groups had been held near Cannes and put on a bus, adding they had “violated no laws in France” and were “not involved in the events in Marseille or in the port or at the stadium”.

35 people have been injured in the Russian/England clashes, most of them English fans – while a total of 20 people were arrested after three days of violence in Marseille.