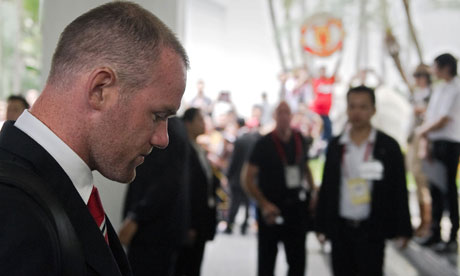 So the news is out. Chelsea have officially bid for 27-year old Manchester United and England striker Wayne Rooney.

And to add spice to the intrigue, recently appointed Chelsea manager José Mourinho has now stated publicly that Rooney is his only transfer target this summer.

Interesting, huh? We seem to be heading for another major transfer between two top English Premiership sides which could well end up being acted out like “will he, won’t he?” prelude to the £26m transfer of Arsenal’s prolific Dutch striker Robin van Persie.

Somewhat ironic then that it should be the presence of van Persie, now firmly established as Manchester United’s number 1 striker after a blindingly successful first season at Old Trafford, that has unsettled Rooney. Unsettled him to the point where, after scoring 197 times in 400 games for the Old Trafford side over nine seasons, he now yearns to move to pastures new.

So, where will it end? To find the answer, think back to the van Persie saga last year. It was all smoke and mirrors for weeks and weeks, and was unresolved until just before the season started.

But, for recently retired United manager Sir Alex Ferguson, it was probably a done deal, in fact a dead cert, long before it was finally agreed. Sir Alex will undoubtedly have learned, directly or indirectly, that van Persie wanted the move to United. It was probably always a case of things taking time to sort out between the two clubs and then, finally, the player.

Just think back to the repeated denials by Arsenal manager Arsene Wenger and his statements like “I’m absolutely certain that van Persie will be playing for Arsenal in the coming season.” In fact, if you recall, during Arsenal’s pre-season tour of Germany when van Persie played brilliantly as they trounced FC Cologne in a friendly game, Wenger was again telling the media that he would be still be playing for Arsenal the following season.

And look what happened. Just as we all suspected, Sir Alex got his man.

Will it be the same outcome with Mourinho and Rooney? For Mourinho to state so categorically that Rooney is his only transfer target is very significant. Just like van Persie last year, Rooney must have directly or indirectly stated his wish to join Chelsea. Does this explain his rapid homecoming from United’s preseason tour? You do have to wonder.

It appears that Manchester United, in one typically crafty Mourinho moment, have been put in an impossible position. Wayne Rooney must, and I emphasise must, want to leave United.

After stating yesterday that he is angry and confused at his position with the Premiership champions, we can now be sure that United know he wants to leave.

They, of course, can choose to make an example of him, similar to the stance Manchester City took with Carlos Tevez in 2011. They could stand firm and refuse to sell. They could make him train in isolation and play him in the reserves.

But just imagine a brooding Rooney skulking around the training ground and under intense media glare. And worse still, imagine a dispirited, crestfallen Rooney being tempted back to the old bad behavioural habits that have dogged him so many times in the past.

Equally importantly, is there any point in United seeking to punish a player reputed to earn £250k a week? It might be a good moral stance but it may not be sound business in the long term.

Although it will hurt United and their fans to see a star striker like Rooney go to Chelsea, who would then become even bigger Premiership rivals this season, manager David Moyes and the United board have got to make sure this saga doesn’t drag on and on to the point of affecting their pre-season preparations and, heaven forbid, player morale.

Manchester United have got to make a decision that is in the best interests of the club. Sadly, it is probably time for United and Rooney to part company – for the good of all parties.